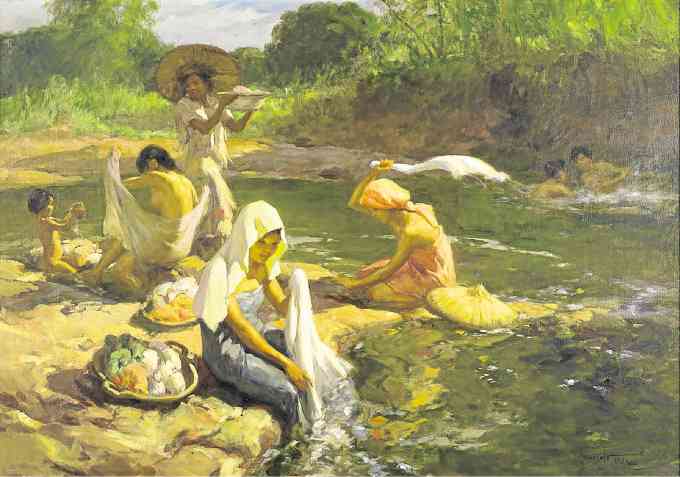 COMING on the heels of the celebrated exhibit of Philippine 19th-century art in Europe, “Filipinos in the Gilded Age,” León Gallery is coming up with a special display of 17 major paintings from its forthcoming September auction that all together interrogates Philippine cultural identity in the visual arts—or the lack thereof.

The exhibit is a “curated auction” from more than 150 lots of paintings, sculptures, exquisite religious icons and antique furniture of León’s annual third-quarter auction on Sept. 10. Exhibit will open on Sept. 4 along with the preview of the rest of the lots.

It will be the first time that León is holding a curated auction; indeed, it will be the first time such an attempt will be made in the country. Gallery owner Jaime Ponce de Leon explained that curated auction is a recent trend among auction houses in the West that had made art more appealing to a younger audience. He cited the success of the Christie’s curated auction last year revolving around the theme of “Looking Forward to the Past,” that is, “artistic innovation inspired by the past”:  Pablo Picasso’s Les femmes d’Alger, Version O (1955) sold for $179.3 million, becoming the most valuable work of art ever sold at auction, while Alberto Giacometti’s L’home au doigt (Pointing Man) (1947) sold for $141.2 million.

As the example shows, a curated auction contains different works but organized around a governing theme. Although the curated pieces wouldn’t exactly be sold separately from other works in the September auction, Ponce de Leon explained they would be exhibited in a new space at León’s Eurovilla I auction address separate from the usual preview room and arranged in such a way as to trigger a discourse on significant issues revolving around art.

The discourse is needed so to restore the art public’s attention on art, not fabulous auction prices.

“We tend to get lost in the prices so we need to go back to the original reason why we’re here—because it’s great art,” said Ramon N. Villegas, who’s curating the special exhibit along with Lisa Guerrero Nakpil.

And since, as Nakpil pointed out, next year is going to be the birth centenary of National Artist for Literature Nick Joaquin (1917-2004), the title of the exhibit will be “Two Navels,” a reference to his classic 1961 novel in which the woman protagonist Connie Vidal claims to have two navels, later revealed to be nothing but a schizophrenic delusion but which on a metaphorical level, represents the confusion of Filipinos over their having two dualistic, even clashing, patrimonies from Spain and the United States.

The curated auction will therefore be a follow-through to “Gilded Age,” which showed an impressive number of repatriated art from Europe by Luna, Hidalgo, Fabrian de la Rosa and other early masters that represented Philippine civilizational advancement during the twilight of Spanish colonial rule.

“Curated auctions have been on the international scene for a few years, but it was the thrilling reception received by our recent ‘Gilded Age’ that clinched the decision for León Gallery to launch its very own,” writes Ponce de Leon in the special catalogue. “The ‘Gilded Age’ exhibition of important paintings, ivory  and furniture from the 19th century attracted not only major collectors and institutional interest here and abroad, but also droves of students from every field (and not just from art and design), history buffs, design devotees, as well as people who are not necessarily interested in art but believed it would be an interesting and enriching experience for themselves.”

“Two Navels” hopes to build on that audience craving for elevated discourses on art and nation-building, heritage, identity and modernity.

In his catalogue introduction, Villegas quotes Joaquin: “The identity of a Filipino today is of a person asking what is his identity.”

Villegas explained in an interview with the Inquirer that while some contemporary artists dismissed questions about Filipino identity, considering them passé, they remain relevant. “Philippine art has gotten some international acclaim but you hear of incidents in which foreign galleries and festivals wouldn’t exhibit your work because on the one hand, it doesn’t look ‘Filipino enough,’ and on the other, it looks ‘too Filipino.’”

He said “Two Navels” wouldn’t come up with final answers, but “present the situation.”

The choice of Joaquin as governing intelligence to the curated auction is timely and relevant. Villegas in his catalogue essay writes that Joaquin criticized “nativism.” He adds the great writer described “the Filipino as ‘a work in progress’ whose national identity is the dynamic product of the various cultural influences in its history (particularly the Spanish-Christian influence).”

Nakpil noted that some of the pieces that were picked were of foreign subjects and it would be good to discuss how the artists endowed them with their Filipino sensibility. She pointed to Joya’s huge oil circa 1968 triptyich, “Rain Cycle,” an abstract expressionist work from his New York period.

The monochrome grays may represent a drizzly day in the Big Apple, but its spirit and style could have been influenced by Joya’s experience of monsoon rains in the Philippines, explained Villegas.

Ponce de Leon, in his catalogue remarks, says that Villegas and Nakpil “seek to pose questions as to the true nature of Filipino art and identity, by presenting a dialogue between the most famous Filipino artists educated abroad and those equally influential but entirely homegrown.”

The show “also seeks to continue the discussion of the age-old debacle between figurative and abstract art.”

As Nakpil said in the interview, “Are Joya and H.R. (Ocampo) less Filipino because they painted abstracts?”

Although Joaquin didn’t write much about the visual arts, he situated his discussion of the styles and idioms of artists he profiled in his acclaimed reportage in the context of Philippine cultural identity.

Although he did not study abroad, he went to the United States, Spain and Mexico on a travel fellowship, the three countries then as now representing the seminal rift and fracture in Filipino sensibility.

Spain should stand for the Filipino’s Latin heritage that had been challenged and eventually deposed by the Anglo-American incursions (the unsuccessful British incursion in the 18th century and the successful US invasion at the turn of the 20th century); and Mexico representing not only the Philippines’ introduction to the world political economy via the historic Manila-Acapulco Galleon Trade but also a prefigurement of her own experience with US imperial aggression since Mexico had suffered earlier from US expansionism as shown by the annexation of Texas and the Mexican-American war.

Many historians nowadays have poor appreciation of the fact that much of Philippine “nationalist history” has been conditioned by US Pacific expansionism and its anti-Latin propaganda, perhaps best expressed in what the Spanish-American historian Salvador Madariaga called as “la leyenda negra” (the black legend).

The anti-Spanish tenor of much of Philippine historical discourse is a product of Yanqui black propaganda that basically trumpets the yarn that the US conquest and colonization of the Philippines, parts of Mexico and other Pacific territories as “manifest destiny”—supposedly the divine right of the norte Americanos to bring civilization and order to peoples living in the Latin dark ages.

But as the “Gilded Age” showed, Filipino artists, craftsmen and intellectuals could compare to the best of Europe and Filipino cultural and social advancements were even ahead of the Americans. As Joaquin told this writer, “Under Spain, Filipinos were reading Cervantes’ ‘Don Quixote; when the Americans came, Filipinos started reading ‘Humpty Dumpty.’”

Like Joaquin, Amorsolo went to Spain on a travel fellowship in the 1920s and painted landscapes that would become the germ of his trademark Philippine sunlight-endowed canvases. As Joaquin wrote in his 1969 Philippines Free Press profile of Amorsolo:

“The vintage period, the 1920s, was when he developed the light—or, rather, the backlighting—that is his greatest contribution to Philippine painting. The glow against which his figures stand and which usually coruscates into a burst of light at one point of the canvas—in a cluster of leaves, a spill of hair, the swell of a breast—is what makes classic the Amorsolo Filipiniana of his prime.”

To what would Joaquin attribute the “backlighting” said to be intrinsic of the quality of Philippine sunlight, which he said would show Amorsolo’s “magnificent vitality” that suffused even the artist’s “most vulgar work”? He traced it to the artist’s sensuality: “The light for which he is famous is the rapture of the sensualist utterly in love with the earth, with the Philippine earth.”

Joaquin inevitably traced the art to Amorsolo’s “exuberance,” presumably one largely formed and informed by the Filipino’s Latin-Iberian heritage, as shown by Joaquin’s adoption of the “manalive” phrase of St. Iraneus of Lyon (“the glory of God is man fully alive):

León Gallery’s Magnificent Auction will be on Sept. 10, 2 p.m., at Eurovilla, Rufino St. Legazpi Village, Makati. General preview will start on Sept. 3 and the curated auction preview and exhibit will be on Sept 4. View the online catalogue at www.leon-gallery.com.