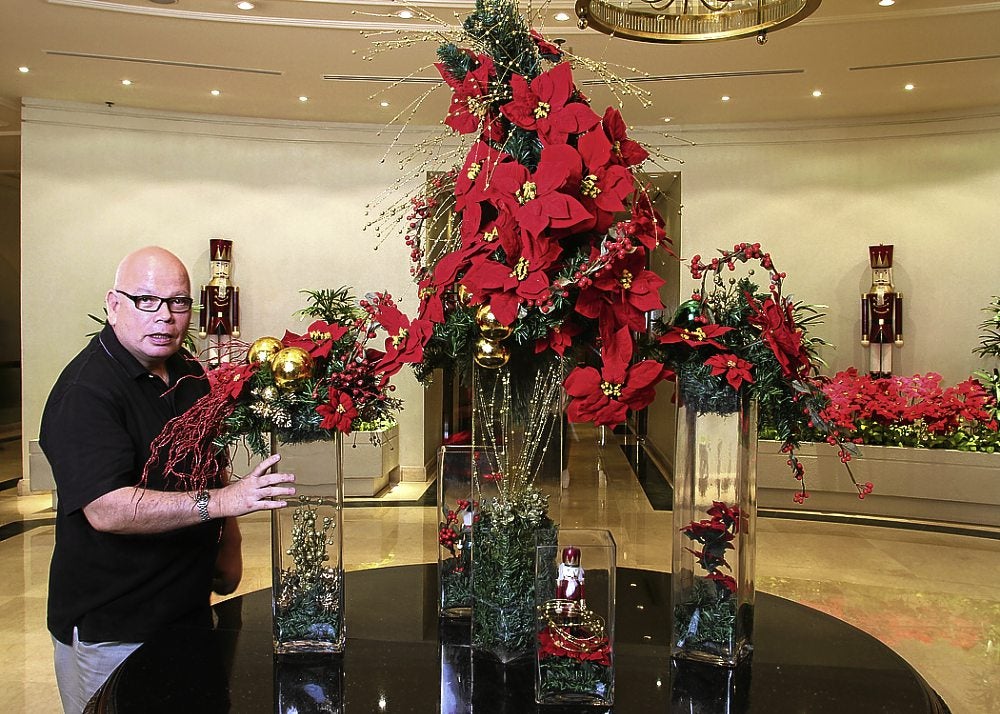 Whether in dance or decor, you can’t go wrong if your theme is “The Nutcracker.”

When the Edsa Shangri-La Hotel tapped floral designer Antonio “Tony” Rodriguez to style a Nutcracker Christmas, he immediately said, “It’s very me, and not because I’m old!”

He wasn’t referring to “The Nutcracker’s” indulgent sweetness, but rather the tradition and the childlike wonder that the story stood for.

E.T.A. Hoffman’s coming-of-age story is set in a Christmas party. Magician Herr Drosselmeyer gives a Nutcracker doll to the heroine Clara. After midnight, everything in the living room comes to life and the Nutcracker combats the Mouse King. (It turns out that the Nutcracker doll was Drosselmeyer’s nephew.) He is transformed into a prince who tours Clara to the land of marvels—the kingdoms of snow and sweets. Ultimately, he introduces Clara to the venerated Sugar Plum Fairy.

Figuratively speaking, Rodriguez took on the role of Drosselmeyer, casting his brand of magic into the decor. Taking liberties with Hoffman’s story, he focused on the traditional Christmas motifs, the Nutcracker doll and the Kingdom of the Sweets, hoping that they would evoke childlike awe.

At the Lobby Lounge, the towering Christmas tree is adorned with chocolates with golden silhouettes of Spanish, Chinese and Russian dancers, candy canes, gingerbread houses and his signature red-and-glass balls with gold leaf, golden lamé roses and silk magnolias.

He explained that since the hotel is full of red from the poinsettias and flowers in the garden, he put gold accents for vibrancy. About 150 sets of lights illuminate the tree. “From the entrance, it looks like a flaming tree! During the lighting ceremonies, the tree was like a perfect cone. It’s the best that I’ve done.”

The spectacle is more exciting at night when the Christmas tree plays against the glittering lights in the garden.

The ballerina fairy and the Nutcracker are paired together by the boxes of gifts under the tree. Fiberglass fairies are perched on dangling Christmas wreaths.

The entrance is lined with life-size Nutcrackers as if guarding the place. From the archway embellished with swags of foliage and lights, visitors could see the view of a fountain of lights.

Throughout the public areas, the tables are adorned with arrangements of the poinsettias, pine branches, Christmas balls, tinsel and berries with the Nutcracker as the focal point.

In some arrangements, the Nutcracker is encased in a glass vase, nestled atop a garland of golden foliage and red poinsettias.

Asked why no snowflakes, he retorted, “They’re all over town.”

“This is a five-star hotel not Divisoria.”

This is Rodriguez’s 10th year in decorating Edsa Shangri-La hotel. For five years, when the Department of Tourism held a Christmas decor contest among hotels, the Edsa Shangri-La won most of the awards.

Although the contest is no more, Rodriguez has been getting accolades from admirers and the young children who love the dolls.

Decorating since he was six years old, Rodriguez would assist his mother Lourdes when she prepared arrangements for All Souls’ Day and Christmas.

At 12 years old, he made his own White Christmas theme, using flaked Perla soap bars that were melted and shaped into snowballs and snow men. His aunts were impressed, and since then, he was in business.

Through the years, Rodriguez has dressed up many hotels in the holiday spirit. At Edsa Shangri-La, beneath the ubiquitous tinsel, tradition and confection is a statement of modesty and simple aspirations—that of giving good cheer.