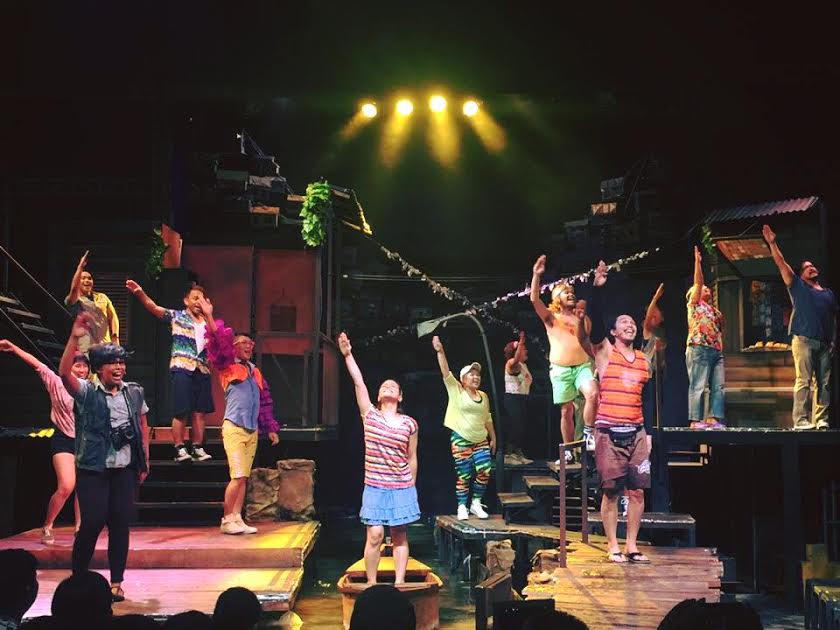 “Fitful narrative, heart-rending music” was the title of Walter Ang’s review for Inquirer Theater of the original run of Philippine Educational Theater Association’s (Peta) “Rak of Aegis” back in February 2014.

Obviously, these shortcomings in storytelling never deterred audiences: This latest run played a total of 82 performances on an eight-show-a-week schedule and almost always to sold-out crowds.

It’s the closest local theater in recent years has had to a hottest-ticket-in-town phenomenon, a kind of “Hamilton” or “Book of Mormon” in a city where the curtains usually rise and fall only on weekends.

Whatever faults in the writing, there was certainly none to be seen in the music. Aegis was this show’s foremost selling point, but what it gave the viewer in return was more than just three hours of the band’s signature eardrum-bashing vocal acrobatics.

“Epic, glorious music-making” was how Inquirer Theater editor Gibbs Cadiz astutely phrased it in his yearend roundup two years ago. And that’s thanks in large part to Myke Salomon, who essentially picked apart the best of Aegis and came up with a score that not only feels refreshingly devoid of its chart-topping origins, but actually makes perfect sense once fused into the entirety of the musical.

(Salomon would prove this was no fluke with “3 Stars and a Sun,” premiered earlier this year by Peta, where he transposed the rap music of the late Francis Magalona to a dystopian setting, to engaging effect; his next project, another jukebox musical titled “Ako Si Josephine,” borrows from the Yeng Constantino songbook and opens next week.)

Certain sectors may frown upon the jukebox musical for charges of unoriginality, if not laziness. But combine Salomon’s peerless overhauling of Aegis with the many clever ways the scenes were staged (by director Maribel Legarda) and how the jaw-dropping set (by Mio Infante) was utilized, and one would be surprised at how “Rak” sidestepped the predictable.

It all held true even after several viewings: the two versions of “Sinta,” one involving bubbles and a gaggle of “labanderas, the other a “doble-kara rendition that never failed to bring the house down; the surreal silliness of the “Christmas Bonus” segment, featuring a trio of shrill, cackling Christmas tree-looking creatures; even the extended sequence in Act II where the citizens of the fictional Barangay Venezia exhibit the tricks they’ve come up with in an effort to turn the flood-stricken community into a local attraction.

One also acquired an increased appreciation for the many little details that held up this production: the peculiar type of garbage floating in the make-believe flood; the calculated manner in which rain was produced, such that water landed exactly where it’s supposed to land on the dry set; Gio Gahol’s choreography, transforming the set into a hamster maze for the performers, to name a few.

Cast members, too, came and went, and put their various spins on the idiosyncratic, distinctly Filipino characters. In fact, it isn’t farfetched to think that “Rak” became a pilgrimage site of sorts for performers: The formidable history of cast replacements boasts such names as Sheila Valderrama-Martinez, Lorenz Martinez, Sweet Plantado-Tiongson, Jon Santos and even Renz Verano, who lent a genuine shade of rock stardom to his first stage role.

Those who had been with “Rak” since the beginning had it even easier, their lengthy residence translating to an authentic familiarity with their roles, a kind of second skin beneath which they traversed the stage, belted their songs and scoured the emotional terrain all at once.

It’s the case, for example, with Aicelle Santos as Aileen, the poor girl with big dreams and an even bigger voice; or Phi Palmos, the best to have essayed the part of shoe-designer wannabe Jewel; or three of Aileen’s suitors—Salomon as Kenny, and Jerald Napoles and Pepe Herrera, who were both sensational as the jologs boatman Tolits (and whom TV and film have certainly taken
notice of).

In this year’s run, the standout was undoubtedly Tanya Manalang (of the London revival of “Miss Saigon”), who brought a true musical theater voice to the role of Aileen and enthrallingly gave Santos and Kim Molina—who won the Gawad Buhay! Award for Leading Actress in a Musical for her turn here—a run for their money.

And Carla Guevara-Laforteza, as tough-talking barangay captain Mary Jane, surprised with her breathtaking riffs and growls.

It is unfair, however, to think of “Rak” only in terms of individual performances, when the next best thing about it (after the score) was its ensemble. Even better than the magnificent singing that made each “Rak” performance such an auditory pleasure was how the bit roles were handled and expanded.

Here was the very example of a no-small-part brand of theater. The multiple taong-bayan tracks were assigned to only six performers per show, yet one never got the feeling that there existed a throwaway part in this production.

Many times, these bits of acting on the peripheries turned out to be the ones that really stuck to memory. This author’s personal favorites: Carlon Matobato’s booty-jiggling store     manager; Via Antonio’s Dora the Explorer interviewing the newly famous Aileen; and “Jissica,” the Bisaya-accented free spirit who hits on Kenny.

By now, “Rak” was virtually critic-proof; say what you will about it, and people still flocked to see it. It’s a life granted only to the biggest of marquee names, the likes of “Les Misérables,” “The Phantom of the Opera” and “Wicked” (a touring production of which “Rak” directly competed against for the crowds back in the first quarter of 2014).

One may even view this enormous success as a vehicle for a more admirable cause: opening the doors of theater even wider and reaching out to more varied audiences.

After all, having the cast and fans of a hit television soap swarm the Peta Theater Center, as ABS-CBN’s “On the Wings of Love” informally did, certainly bears an impact on future sales, and word-of-mouth, and even the way non-theatergoers look at the art form.

Think of it as a responsibility born of a well-deserved longevity. Two years, five runs and thousands of repeat fans later, it remained this wildly entertaining piece of theater—how it aged, as it happens, best captured by an Aegis lyric: “Sing-tamis ng wine, sin-tatag ng sunshine.”