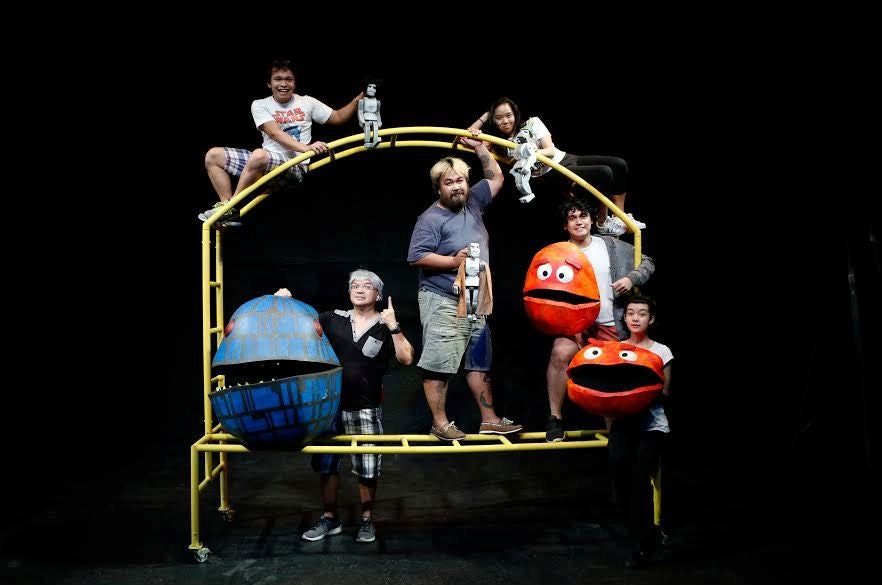 Once the play “The Wong Kids in The Secret of the Space Chupacabra Go!” begins its 11-day run at Cultural Center of the Philippines (CCP) Little Theater on Sept. 15, comparisons are sure to be drawn between the production and the popular Netflix sci-fi series “Stranger Things.”

The latter, which is set in a small US town in 1983, opens with four pre-teen boys playing a spirited game of Dungeons & Dragons. There is some role-playing and much shouting involved; it’s obvious they’re invested in the game. In school, they are scoffed at for being nerds.

The same could also be said about the Wong kids—siblings Bruce and Violet Wong who are bullied at school for being Asian, super smart and imaginative, said Ralph  Peña, the play’s director. Forced to entertain themselves, they play a game using common playground structures.

“The set looks like one you could find in your backyard. It’s like a Saturday afternoon spent playing outdoors,” said Peña, who is also the artistic director of New York-based Ma-Yi Theater Company.

“The Wong Kids,” by playwright Lloyd Suh, is the first production in a planned “play exchange” initiated by CCP. “They wanted to do an outreach program for kids,” he said.

Using a mix of action-driven storytelling, puppetry and visual magic, the production, which will be staged in English, follows the superpowered siblings.

“Bruce and Violet, however, describe their powers as ‘lame.’ They can lift rocks with their minds, breathe in outer space and perform a dance. These allow them to obtain enough info to get to the next level,” Peña said.

In their journey, they meet a prognosticator who tells them that “from two, only one will emerge,” which they interpret as one of them perishing. They also have to deal with the Bandersnatch, a bully who wants to eat Bruce. They also befriend two rocks who help them on their journey.

While the play deals with loneliness, bullying and just trying to fit in, Peña said they “won’t be spoon-feeding the audience.”

“There won’t be any synthesized lessons or morals. We’re on the level of these young minds. Let them pick up whatever learnings they want from the show,” he said.

In her review for The New York Times in 2014, Laura Collins-Hughes wrote, “The magic of Ralph B. Peña’s production… comes from its theatricality: live actors, inventively simple sets by Meredith Ries and whimsical puppets by David Valentine whose evil Space Chupacabra resembles a three-dimensional Pac-Man.”

Peña shared that the play was “very successful” in the United States and he’s hopeful it will do the same here. “Some foreign productions don’t translate, but this one might because the characters are kids dealing with their Asian heritage,” he said.

“‘The Wong Kids’ was written for young audiences aged 7  to 15, but we’ve performed for kids as young as 4 and as old as 17. There’s a lot of action and comedy that the parents will also appreciate.”

Other highlights include shadow puppets, flying and a black light segment.

There will be two benefit performances for the Catholic Ministries for Deaf People   (CMDP) where the entire play will be hand-signed. Students of the deaf/mute hand signing language at College of St. Benilde have been rehearsing with the stage actors in this effort to share a live performance with the hearing-impaired.

“The Wong Kids in The Secret of the Space Chupacabra Go!” is presented by CCP and Ma-Yi Theater Company, in association with Tanghalang Pilipino and Philippine Airlines with the support of Stage Craft International. It runs Sept. 16-25 at CCP Little Theater.