‘Ako Si Josephine’ is a musical for the ‘Yeng at heart’ | Lifestyle.INQ ❮ ❯ 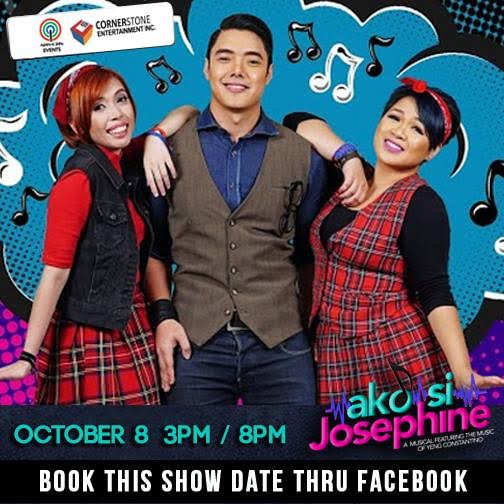 ‘Ako Si Josephine’ is a musical for the ‘Yeng at heart’

Yeng Constantino, the songwriter-singer of hit ballads and pop rock ditties exploring affairs of the heart, is celebrating her 10 years in the music business not with a concert, but with a new musical that makes use of her songs.

It was Yeng’s manager, Erickson Raymundo of Cornerstone Talent Management, who thought of the idea about three years ago.

“I love watching musicals on Broadway and local productions like ‘Rak’ and ‘Care Divas.’ I realized ’yung mga kanta ni Yeng may kwento. As manager, you have to think of something different for your artists,” says Raymundo.

He presented the idea to the “Rak” team, and got their nod. But the writing process took a while. Magtoto and Legarda came up with several drafts, but none seemed to stick.

“One time, backstage at ‘Rak,’ she [Legarda] blurted out, ‘What if love songs were not allowed?’ That made me come up with a storyline that revolved around that ‘what if’ situation—what kind of world would disallow love songs? It was at first a dystopic world that I conceived,” recalls Magtoto.

But then “3 Stars and a Sun,” a musical featuring the songs of rapper Francis Magalona, happened. “We had to junk the storyline because we didn’t want a repeat of a dystopic world on the Peta stage,” says Magtoto.

“So we thought of something that might marry both ideas, and this current storyline is the result. I was interested in Maribel’s concept of making it look like a graphic novel. It made me think of ‘Edward Scissorhands’ where you don’t know what era it is or where it really is. It seemed to jibe with Yeng’s style, based on her music videos.”

The play is set in Allegra, a fictional music empire, where only a certain kind of music called HYP is allowed. HYP stands for Happy, Youthful and Purposeful. Josephine works under Chinito, her boss and her crush. Later, both secretly write a song.

“Guess what? A love song, of course, to replace HYP music and make people face their real feelings and, basically, to feel again,” says Magtoto.

“Their boss Monotomia, a despot at heart, makes it appear she wants everyone to be happy while working, hence the HYP music to accompany their every move. What will Josephine do when Monotomia finds out about their forbidden music-writing?”

When Constantino read the script, she was amazed.

The characters are related to terminologies in music, and their characteristics are based on their names. Magtoto says Salomon also suggested crazy names like Schizoprano (Domileo Espejo) and Tenorchur (Roi Calilong), “who hopefully are soprano and tenor, respectively.”

“Yeng’s music is playful, fun, or they poke fun at otherwise irritating situations; and when romantic, her music speaks from the heart. In her latter compositions, you’ll see the maturity even in her musicality, and these are the songs that heighten certain scenes,” Magtoto says.

“As in ‘Rak,’ I had great fun re-purposing the songs, taking a love song and giving it a different context or meaning based on the characters who sing it. ‘Cool Off’ is now not about lovers. There are other characters who have to sing, and it can’t all be about love.  There are parents, best friends, enemies.”

Monotomia the despot is played alternately by Jon Santos and Ricci Chan.

Chan says he and  Santos will offer different Monotomias. “He’ll come up with his wonderful improvisations, I’ll come up with my own. No matter how much we share, it’s gonna be different like apples and oranges.”

Josephine is Constantino’s real name. She says she begged off from playing the part, knowing her forte “is being a singer and songwriter.”

Though she won’t be in the musical, she promises to be at Peta Theater Center during the first night (Sept. 8) and on more show dates.

Josephine is played by Via Antonio, with Maronne Cruz as alternate, while Chinito is played by Joaquin Valdes.

Antonio auditioned for an ensemble role, but ended up impressing Constantino.

“When I saw Via’s performance, I was laughing so hard. To think she said she wasn’t prepared at all. I told [the selection committee] my wish that she’d be chosen as Josephine. I was very happy when I was told later on she got the part,” says Constantino.

Antonio, who started with Dulaang Unibersidad ng Pilipinas,  says she’s been dreaming for a role as big as Josephine. “’Yun talagang duduguin at papawisan ka, macha-challenge ka, mabubuhay ang creative juices. I’ve been praying for this for years.”

Comparisons between “Josephine” and “Rak of Aegis” are expected. But,  Constantino says she hopes “Josephine” would achieve at least a good measure of what “Rak” did, because besides having the same creative team behind it, the new musical is, in her words, “sobrang funny and cute talaga.”

The musical will use 28 songs from Constantino’s catalog. A production of Peta, “Ako Si Josephine” is coproduced by Cornerstone and ABS-CBN Events and will have 30 performances.

Jon Santos’ break-a-leg message: “Fairy tales can come true. It can happen to you if you’re Yeng at heart.”