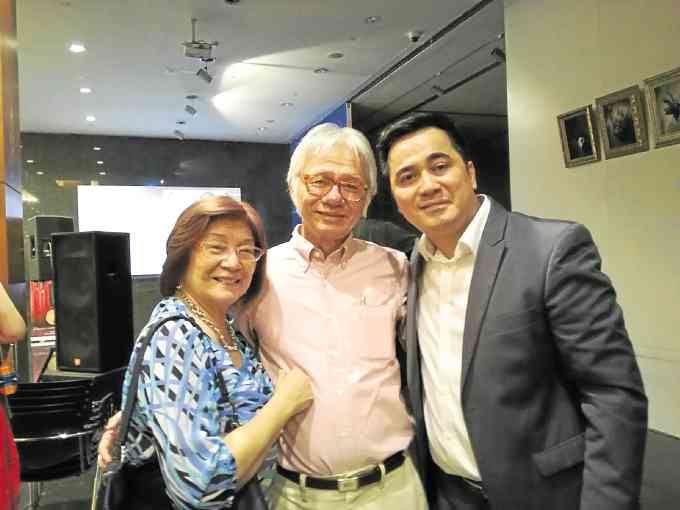 A little bit of heaven on a rainy Friday evening

Sometimes a little bit of heaven peeks from even the darkest and thickest clouds, as it did that rainy Friday evening at the Ayala Museum.

On bleak days, and not just weather-wise, it’s easy to forget that the boundless blue sky is always there, whether we see it or not. To transport us to a better place than we happen to be, we can always count on music, the language of the soul, from which we are all attuned to the divine.

And that was precisely the world we found ourselves in, compliments of our own world-renowned tenor Arthur Espiritu, with accompanist Najib Ismail, who never falls short of his billing as “the country’s most sought-after collaborative pianist and chamber musician… an independent voice and sometimes a Greek chorus in his own right.”

Earlier that night, I was told only 20 had confirmed their reservations for the concert. But in our culture one cannot rely on only those who confirm; indeed, soon enough, the venue filled up. Additional chairs, in fact, had to be provided.

Everything went well, but something just has to be said about our habit of not sending RSVPs to party hosts and not confirming reservations. This lack of formality seems to me becoming even more widespread, a perfect twin to arriving late for everything, which earned us our very own “Filipino time”—for which the convenient and all-too-credible excuse these days is traffic.

My grandfather would have been scandalized. He frowned on tardiness and regarded as absolutely unacceptable the lack of a formal yes or no to an invitation. It showed a lack of consideration for the host—“una falta de educacion.”

In my own younger days, I may have been more proper, thanks to forbears prominent among whom, aside from Lolo and Lola, was our beloved Tita Connie.

Tita Connie, who lived in Europe but liked to give parties for her nieces and nephews when she was in town, took the initiative to exact proper demeanor and other social niceties from us who had limited—but memorable—exposures to her. Like Lolo and Lola, she instilled in us the beneficial value of being considerate of hosts, elders and even the help.

But Tita Connie we especially indulged, partly because she considered it a really big deal, but more because it somehow made her happy whenever we complied, not only with RSVPs but also with thank-you notes for her parties.

But now I seem to have my own lapses, and they go little sanctioned if at all. But not with Vergel; not a typical senior, he won’t buy any of my senior excuses for being late. However, he needs no excuse for staying home. In fact, it now takes conjugal efforts for Vergel and I to even watch a movie—it had better be a really good one or we wouldn’t bother.

But that night, nothing but nothing could keep us home, storm and all—not with an Arthur Espiritu concert in the neighborhood. Commitments abroad hardly give him time for more than one concert whenever he’s in town. We just had to be there.

And, to be sure not to be late, we had early dinner at Café M, right across from the venue. Arthur will be back again, but closer yet to Christmas.

At the end of the program, amid the clamor for an encore, and after about 20 Schubert songs sang in impeccable German taken from the “Beautiful Maiden on the Mill,” Arthur indulged his audience with Willy Cruz’s “Sana’y Wala ng Wakas,” which he sang with the magical combination of effortless singing and ardent passion. Every note came out clean and sparklingly polished.

In fact, no sound came out of his mouth that wasn’t incredibly beautiful. For his second and last encore number, he took us back to the composer of the night, softly caressing the Schubert piece popularly known as “Serenade.”

So, off again, he flies to debut as Rodolfo in “La Boheme” with the Sydney Opera House for its next season and to perform Elvino in “La Sonnambula” in Munich in October, and to other foreign commitments. He is described as a “regal tenor, singing with a superbly beautiful legato.”

And he is said to be establishing himself as an accomplished Bel Canto tenor, sometimes described as calisthenics of the vocal chords. Vergel, who insists on more familiar descriptions, speaks of “ease, polish and rich range of tones.”

At the Amaya beach resort in San Juan, Batangas, we had a chance to share a meal with Arthur in his human form, as an affectionate husband and doting new father the last time he visited. Disarmingly, he owned up to having started as a member of a rock band, hitting drums as well as singing his lungs out. But opera, despite the discipline and perfection it demanded, captivated him and lured him away from rock’s youthful appeal.

Arthur can now claim his rightful place in the international world of classical music. He deserves the nation’s gratitude for having taken the long hard way of self-discipline and self-sacrifice to global success.

Indeed, contrary to those who impatiently cut corners to achieve their goals, there are no shortcuts to real, long-lasting success.