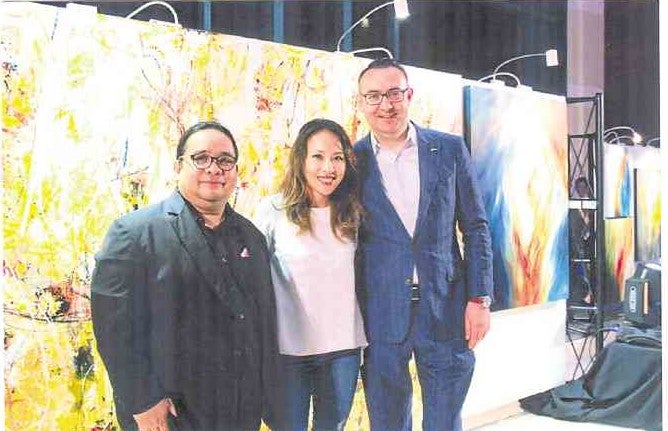 Laurent Boisdron, general manager of the Radisson Blu Hotel, hosted “Every Day is a Party” at the hotel lobby one cool evening. It was an occasion to chill over cocktails, canapes and contemporary art.

“Blur your eyesight,” professor Joya would have said, “and you’ll get a clearer picture.”

Jewelle’s were true to form with vibrant colors and that inner fire which somehow makes us think of Turner. “He’s a favorite,” Jewelle said when we mentioned him. Her parents, Carlos and Mariquita Yeung, not wanting to see Jewelle’s paintings stray far, were her best clients. Also her uncle, Rep. Ben Hur Salimbangon.

Jewelle’s fiance Phil Mugglestone was present, as were Carla and Chris McKowen saying we still have to drop by for dinner at the Pig & Palm. Make sure mom (Mariquita) is there, they recommended. “I’m always there,” Mariquita declared.

Present: Radisson’s sales and marketing director Ann Olalo and communications director Princes Anderle, Flor Ynclino, Javy Viklacin, Carmen Campbell and Rosebud Sala who wandered off to Feria for soup. Chef Roberto Kunitz made a special one for them.

Maris Holopainen who owns the Qube Gallery in Crossroads was present, along with Vinnie Tan and Kingsley Medalla, who is Qube’s new coordinator for public relations and events.

Ongoing at Qube is a solo exhibit by Geovanni Abing titled “All That Remains,” which opened Aug. 18 to much curiosity.

Before that there was a three-pronged show titled “In-Tri-Section.” It featured two Thai painters, Jirawat Pramphet and Arthit Pansuay, and a Filipino artist Jon Ray Fernandez.

Next is a one-man expo by my brother Jose Mari Picornell, opening Sept. 15.

It has been a season of book launchings. “Ramblings of the Heart” is a collection of poems written by Felicia Marie Magsaysay Sun, inspired by her late father, Franco Sun.

It was launched at Café Georg on her birthday with a dinner party thrown in for good measure, hosted by Felicia’s proud mom, Myra Magsaysay Sun, who writes in the Cebu Sun Star Daily.

Writing is in Felicia’s genes, as her grandmother Jo Gaboya Magsaysay wrote brilliant society coverages and more. The best have been compiled in a book that continues to sell well. It may have elicited the interest of anthropologists.

“Ramblings of the Heart” is the kind of book you’d like to keep handy. In the car, for instance, or as part of a heap in your study table or working desk. You can turn to it for solace.

Did we ever have a golden era of Cebuano Cinema? Make that plural, as in ages, with the recent publication of a heavy volume by the University of San Carlos (USC) Press.

It is titled “Lilas: An Illustrated History of the Golden Ages of Cebuanos Cinema,” by Paul Douglas Grant ,Ph.D, and Misha Boris Anissimov from the USC Graduate School of Cinema Studies.

It is a scholarly work that evokes many memories  between 1940 and 1970. The weighty tome is best read on a strong table. It is that big, that heavy, that absorbing.

Smaller though heavy, too, because of the rich glossy colored pages is a bestseller recently launched in Cebu by Joel del Prado, who hosted a lively luncheon at Pino restaurant.

Title is “Philippine Cookery: From Heart to Platter,”  by Michael Sarthou III, fondly known as chef Tatung. He is a Cebuano, the grandson of Pepe Atillo, in his time Cebu’s favorite photographer. Before there was Photoshop, Pepe’s “retoque” did wonders.

Chef Tatung was on hand, all over the place, to explain what he had written, and that’s not just recipes but some very useful suggestions. He also served some of the dishes, like the delicious chunks of chicken the Tausog way.

One article in the book is on how to cook lechon the traditional Cebuano way. That’s a secret shared, and revealed to the last minute instruction.