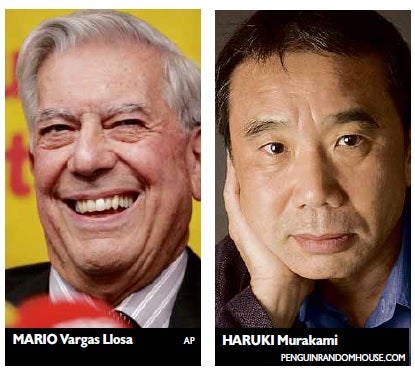 NOVEMBER might as well be called the literary month, if only for this year.

Living literary icons Mario Vargas Llosa and Haruki Murakami are reportedly visiting the Philippines this November for a series of lectures, book-signing and a fun-run event, sources told the Inquirer recently.

Peruvian-Spanish Vargas Llosa, 2010 Nobel Prize for Literature recipient, will be guest of honor in several events to be organized by Instituto Cervantes de Manila, cultural arm of the Spanish Embassy in the Philippines.

“There are no complete details yet in his itinerary except for a lecture forum on Nov. 8 at Instituto Cervantes in Makati,” José Maria Fons, cultural officer of IC Manila, told the Inquirer.

Fons added the Peru-born writer would also have book-signing sessions. One of the venues being considered is a hall or auditorium at De La Salle University in Manila.

The 80-year-old Vargas Llosa will be accompanied by his partner, Filipino-Spanish socialite-model Isabel Preysler.

Vargas Llosa is the author of “Aunt Julia and the Scriptwriter,” “The Storyteller,” “In Praise of the Stepmother,” among other best-selling novels. He has also written stage plays and nonfiction books.

After taking a Spanish citizenship, he was awarded the prestigious Miguel de Cervantes prize in 1994.

Japanese novelist Murakami’s visit is still in the works, said a source from the Japan Foundation Manila.

The source said the 67-year-old writer would have book-signing events. Murakami’s novels “Norwegian Wood,” “A Wild Sheep Chase,” “The Wind-Up Bird Chronicle,” “Kafka On The Shore,” among others, have been translated into more than 50 languages. 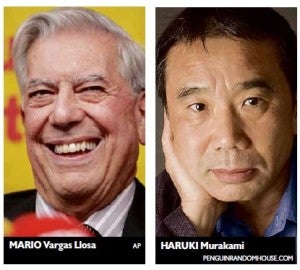 No exact date yet, but our source said Murakami’s visit could be within the last week of November.

“There are still negotiations being made by my Japanese bosses with Murakami’s representatives but if he agrees, the highlight of his visit will be a fun-run event with him,” the source said. Murakami is a well-known running enthusiast, having participated in major marathon events worldwide.

Our source said part of the plan is to give a complete collection of Murakami’s books, all signed by him, as a major prize for the sole winner in the fun run. “It’s not going to be a long-distance marathon, probably up to 5 kilometers or even less,” our source said.

For security reasons, the tentatively titled “Murakami Marathon” will be held in a well-guarded, gated venue. One of those being considered is the track-and-field oval of a Metro Manila university.

“So if you want to meet him and you’re not a runner, better get into running now,” the source said.