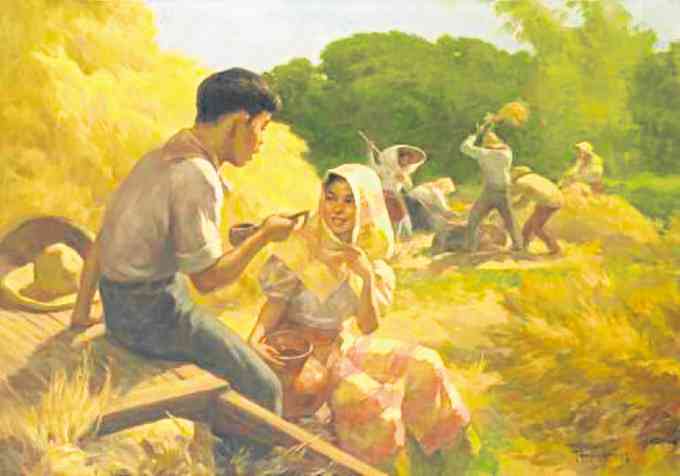 ‘Noli’ in German, Bonifacio’s ‘anting-anting’ up for auction

LEÓN Gallery’s Magnificent September Auction will bid out not only key works by Filipino masters of the visual arts, but also historical materials and relics that should interest collectors and enthusiasts.

Among primary Spanish colonial materials to be auctioned off is an unpublished translation of José Rizal’s “Noli Me Tangere” with the title changed to “Island of Monks.” Bidding for the collection of papers and manuscripts will start at P750,000.

Also to be auctioned off is the “anting-anting” or talisman that Andres Bonifacio used in the Battle of Pinaglabanan. It shows the image of the Nuestra Senora del Pilar on the obverse, and of Santiago de Galicia on the obverse. The collection’s provenance is undisputable, having been given by Epifanio de los Santos to the late numismatist José P. Bantug. Bidding starts at P120,000.

But the highlight of the auction is the country’s first curated auction of 17 paintings by old masters, modernists and contemporary artists. The curated auction is titled “Two Navels,” after the novel “The Woman with Two Navels” by Nick Joaquin. It is a homage to Joaquin whose birth centenary the country will observe next year.

“The curation tells a story,” Ponce de León said. “The curated segment entitled ‘Two Navels’ is taken from the title of Nick Joaquin’s seminal work “The Woman Who Had Two Navels,” of which the curators Ramon Villegas and Lisa Guerrero Nakpil pose questions as to the true nature of Filipino art and identity, by presenting a dialogue between the most famous Filipino artists educated abroad and those equally influential but entirely homegrown.”

León Gallery has assembled a total of 159 pieces of artworks, antiques and objets d’art from distinguished provenances.

Among the 17 magnificent works in “Two Navels” is a masterpiece of H.R. Ocampo that is probably the largest he had ever created—a triptych collectively entitled “Passage” and individually entitled “I Am,” “I Love” and “I Was.” Its starting bid is a whopping P10 million.

“Acquired directly from the artist by the brilliant brain surgeon Victor Reyes in 1971, the work is fresh in the eyes of most collectors,” Ponce de León noted. “Never been exhibited nor published, the work is most interesting with the extant correspondence of Dr. Reyes and the artist that comes with it the detailed sketches and color guides used for the painting.”

Another noteworthy piece from the segment is José John Santos III’s “Here and There,” a 2007 work. It has a starting price of P1.2 million.

Amorsolo’s 1963 oil-on-canvas “Ligawan” has a starting bid of P2 million. The artist has six other works in the auction.

Other prominent contemporary names are featured in the selection, too. Geraldine Javier’s 2001 oil-on-canvas “Daydream,” drenched in melancholy and allure, is one of the highlights in the upcoming sale. It has a starting bid of P600,000.

Meanwhile, Andres Barrioquinto’s three-dimensional creation, “3,000 Black Sins I,” will be auctioned off starting at P250,000.

Some of the most revered modernists make their way to the roster of works, as well. Nena Saguil’s 1964 acrylic-on-paper, “Universe Series,” has a starting price of P300,000.

Rounding out the sale are important historical pieces such as the talisman or “anting-anting” of Andres Bonifacio (P120,000); 19th-century signed architectural plans of Malacañang Palace (P350,000); and Gabaldon Cabinet in ivory inlay (P1 million).

Ponce de León said all the lots had been authenticated.
“Every piece is documented and researched properly with the respective authorities such as Sylvia Amorsolo-Lazo for Amorsolo, Don Rafael Perez-Madero for Fernando Zobel, Salvador Juban for Carlos “Botong” Francisco, and so on,” he noted.