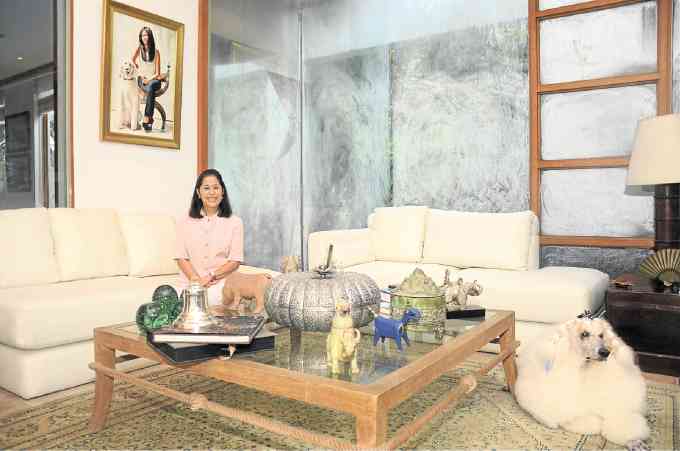 IN THE living room of her Forbes Park home. Behind her is a portrait of younger daughter Michaela by Mia Herbosa.

She has made a vow to provide funding for a specific patient chosen by the ICanServe Foundation every year, so that this individual who lacks the logistics to fight back has a chance to do so.

Madrigal, who turns 60 on Aug. 25, prefers that the patient be one still in the early stages of breast cancer “as much as possible, to save her life.”

The advocacy came at the heels of her own fight against the Big C. It was mid-September 2014 when Madrigal underwent a routine mammogram in the US. The test took longer than usual. The doctors initially explained they were just “taking more films.”

Then, one approached Madrigal and mentioned a “suspicious lump” that warranted a biopsy.

She knew she was lucky. Stage one meant the nasty tumor was relatively easier to beat.

“I opted for mastectomy,” she said.

Madrigal’s family is well acquainted with the enemy. Her late aunt Consuelo “Chito Madrigal had it. So did younger sister Tana, 54, who succumbed to it in 2013.

While Tana was still in the hospital, Madrigal’s doctor convinced her to undergo a BRCA test that would analyze DNA from her blood sample to determine her susceptibility to the disease. A positive result indicated a high tendency to inherit the harmful cellular mutation that leads to cancer. Madrigal’s test was negative.

“So I was surprised in a sense… The doctors who performed the test also said it was a little surprising. But I didn’t ask why did this have to happen. When I had it, I had to deal with it,” she recalled.

Madrigal’s devotion to the Sacred Heart of the Jesus and the Blessed Mother helped. “Even before my cancer, I always prayed to them. I asked them to give me strength through this journey. One positive thing is, I thanked God for letting me have the means to have the best doctors. World-class doctors!”

Madrigal had her surgery within two weeks after the lump was discovered.

The fight may have been brief, but elder daughter Alexandra Eduque said it was “terrifying,” given the “really negative stigma” against the disease, especially in the Philippines.

“You are so accustomed to the belief that cancer equals death. It did not help that our aunt just died a year before because of cancer. I realized that as terrifying as it was, God will never give you anything you could not handle,” the daughter said.

Eduque noted that, unlike back home, the medical community in the US exhibits a “very positive, very different mindset” about cancer.

Madrigal observed that doctors are more available to dialogue and are always open to answer questions and allay fears.

“The doctors’ response is amazing. Any time you can call or e-mail them, and any time they would reply,” she said.

When she returned to Manila, Madrigal quickly got in touch with cousin Robert “Bobbit” Suntay of the Cancer Resource and Wellness (Carewell) Community, a nonprofit support group for cancer patients and their families. Suntay referred Madrigal to ICanServe.

Madrigal is now helping her second samurai. “I have never met her. But I want to make sure she’s totally cured. If you cannot afford the treatment, it’s horrible because treatment is very expensive.”

She remembers the first samurai with fondness. The late manicurist with Stage 3 breast cancer was married to a tricycle driver, Madrigal recalled. The couple showed their appreciation for her assistance.

“She was an amazing, amazing person,” Madrigal said of the cancer fighter. “The husband is a messenger working in Makati. The husband insisted on using his company insurance so PhilHealth would help pay when the patient was confined to St. Luke’s Hospital. They refused the transportation allowance despite her being in pain. She thought that was not part of my assistance,” Madrigal said.

“When she passed, she left two small children. It was heartbreaking. Herceptin is an expensive medicine. You would think the husband would just sell what was left. But he gave it back to Kara, saying it could still be used to help someone else,” she added.

October is Breast Cancer Awareness Month. Apart from her involvement in ICanServe, Madrigal is also an active participant in Habitat for Humanity’s capital campaign effort chaired by businessman Fernando Zobel. Eduque, meanwhile, is a founder of Habitat’s Youth Council.

(Eduque’s involvement began in eighth grade. At age 22, her efforts to raise P100 million were acknowledged by the nonprofit organization’s office in Amsterdam.)

Madrigal is also the chair of the Consuelo C. Madrigal Foundation, named after her aunt, which is involved in poverty alleviation through employment, education, scholarships, feeding programs, microfinance and housing in Payatas, Bulacan, Bicol and the Visayas.

Her involvement in ICanServe is more personal.

“When cancer happens, I think it’s more terrifying for the family than the actual patient, hence ICanServe’s motto is ‘You Are Not Alone.’ You never know what it is until it hits you. It’s almost like having a baby. You don’t know childbirth until you’ve gone through it,” she noted.

“In my case, my advocacy is to save a life. If I am able to do that, happy na ako,” Madrigal added.

Chuchu Madrigal and Alexandra Eduque will join ICanServe’s fashion show at the ballroom of Raffles Hotel in Makati City on Oct. 13.