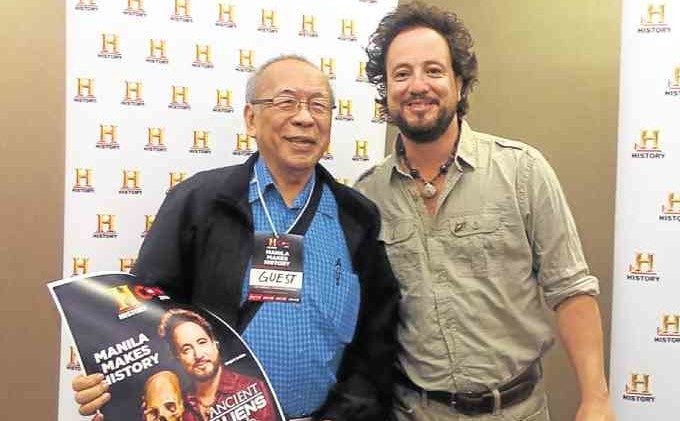 THE AUTHOR and “Ancient Aliens” host Giorgio A. Tsoukalos

WHEN Jacque M. Ruby of A & E Networks Asia, the parent company of several TV Channels, decided to bring History’s TV shows live to Manila, I didn’t hesitate to reserve a seat after hearing that “Ancient Aliens” host Giorgio A. Tsoukalos would be coming to give a talk.

I didn’t expect to see a very large crowd gather at the World Trade Center on Roxas Boulevard to attend the convention featuring the channel’s most popular TV shows. The large crowd consisted mostly of young people, and I felt out of place.

The only event I attended was the talk of Tsoukalos, about ancient gods. He is the editor of Emerging Times Magazine and the fearless proponent of the Ancient Astronauts Theory, which tries to show that extraterrestrials had visited the Earth thousands of years ago and left evidence of their stay. Such proof was largely ignored by mainstream astronomers, anthropologists and archaeologists.

During his over hour-long talk, which was so well attended it caught the organizers by surprise, Tsoukalos said that the gods mentioned by almost all ancient literature of various countries were not supernatural beings, but “flesh and blood people who came from outer space. They were considered to be gods by the ancient people because of their superior technology, which seemed magical to them.”

These visitors from outer space taught the early earth people mathematics, astronomy, agriculture and how to build huge monuments or monoliths.

Tsoukalos said these superstructures could not have been built using the primitive tools of our ancient ancestors. They could only have been achieved with the use of highly advanced technology and engineering skills.

Why these superstructures were built in sometimes very desolate and inaccessible places, no one can tell. But Tsoukalos proposed that these structures must have been built for a reason that only they knew. They were not built out of a whim or by accident.
He showed photos of archaeological artifacts which were formerly believed to be religious or ceremonial objects, but were later proven to be something else. One of these, which looked like a figure of a fish or a bird, turned out to be a small-scale model of an airplane.
When an enlarged model was fashioned in its exact proportion and placed in a wind tunnel or air chamber, it flew perfectly, like a modern airplane.

He also showed small clay dog figurines found in Japan, which appeared to be wearing spacesuits with helmets similar to what modern astronauts wear, suggesting the existence of ancient space travelers or astronauts.

Also, there were ancient cave paintings showing the positions of different planets in the earth’s galaxy. How could ancient people with no telescopes and other modern instruments have known such astronomical configurations, unless they were taught by highly advanced visitors who must have come from somewhere in space?

There were so many thought-provoking statements by Tsoukalos which would raise the eyebrows of conservative and skeptical astronomers, archaeologists and anthropologists, but the audience gathered in the auditorium were apparently not skeptical at all.
The questions posed by a good number of participants showed that they were well read. Somebody, for example, asked about the Fermi Paradox, which was supposed to have originated from Nobel Prize awardee Enrico Fermi, who asked that since there is a big probability of the existence of intelligent and advanced extra terrestrial beings in our galaxy, “Where are they? Why don’t we see them?”

The answer given is that they were here, and they left evidence of their visit, which has been ignored. “Their superior technology could enable them to become invisible to us.”

Tsoukalos was obviously touched by the question one woman asked, such that he approached and hugged her. She said that she and her husband never failed to watch the “Search for Ancient Aliens” show on History channel since it started airing. And when her husband died recently, she said she decided to go to all the countries and places that Tsoukalos had visited to see for herself what he discovered. After hugging her, she asked, “Is there a place you can advise me where to start my journey?”

Without hesitation, Tsoukalos replied, “Go to Puma Punku first, located near Tiwanaku in Bolivia.” And why there? He explained that other mysterious and massive monuments found around the world must have been built by primitive or ancient people under the direction of superior alien intelligence, like Stonehenge in England, the great pyramids in Egypt and Mexico, but the “massive stone walls in Puma Punku appear to have been built by the visiting aliens themselves.”

A quick search on the internet revealed the following fascinating information:
“The most intriguing thing about Puma Punku is the stone work. Each megalithic block weighed several tons. The red sandstone and andesite stones were cut in such a precise way that they fit perfectly into and lock with each other without using mortar.

“The technical finesse and precision displayed in these stone blocks is astounding. Not even a razor blade can slide between the rocks. Some of these blocks are finished to machine quality and the holes drilled to perfection.

“This was achieved by a civilization that had no writing system and was ignorant of the existence of the wheel.”

So who could have built them, asked Tsoukalos, except by “beings with superior intelligence and highly advanced technology?”

But not everybody is convinced that ancient space travelers or ETs built these massive monuments and artifacts. Only recently, a three-hour documentary film narrated by Chris White came out with the title “Ancient Aliens Debunked.”

This is not surprising. Every time anybody proposes anything that goes against conventional wisdom and orthodox science, there will always be somebody who will go to any length to debunk it.