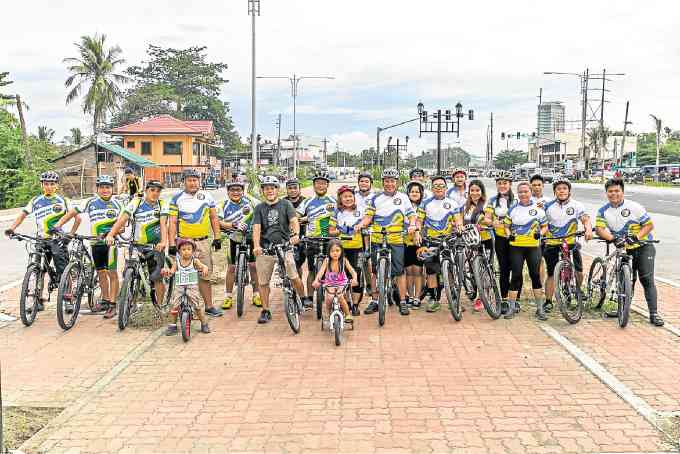 In Iloilo, they bike for fun, exercise–and good causes

IN ILOILO, cyclists are intrepid and united. Happiness for them is hopping on their mountain bikes to commune with the natural wonders of Panay Island, or racing on a bike and beating city traffic.

Like Copenhagen, Iloilo is making a bid to become a city of cyclists. While the Danes are taking to bicycles as their way of fighting global warming, the Ilonggos primarily prefer the bicycle as an alternative and healthier mode of transport.

There are some 70 cycling groups under the Iloilo Bike Council (IBC) and the Federation of Ilonggo Cycling Organizations (Fico). Bike-friendly Senator Franklin Drilon, who heads IBC, envisioned Iloilo to have bike lanes that connect to the airport, main roads, the coastal towns, historic districts and the university loop.

Plans are afoot for the Department of Public Works and Highways to plant more trees to keep the cyclists shaded from the elements.

For the past three years, Iloilo’s Bike Festival has been a collaboration between the local government and private sector. Cyclists gather at Megaworld’s 72-hectare Iloilo Business Park in Mandurriao. Last March, some 5,000 cyclists joined the fun ride.

“Cycling is not just a hobby. These groups have embraced advocacies together with the sport. Mayroong saysay ang ginagawa nila. Their endeavor is purposeful,” says artist and cyclist Rock Drilon, who has been at the forefront in promoting cycling.

Drilon keeps a folding bike for city riding, a mountain bike for the steep trails, and a Japanese bike, built with a market basket.

When he turned 60, his son Mikael gifted him with a Brompton bicycle, which is very comfortable to sit on and provides easy pedalling on the flywheels. These features allow him to enjoy cycling for longer periods.

“It’s like the Mac of computers,” says Drilon. “I’m bi-modal now. I drive when I have to carry paintings, but I prefer to bike. It’s faster and it’s a nice way to meet people. Motorists here respect bikers.”

He recalls that on his return to his home province, he met riders who shared common interests. They formed the Iloilo Folding Bike Riders who, together with other cyclists, bat for clean air and safe cycling lanes.

In mass bicycle rides, Anthony Margarico, sales and marketing head for VisMin at Endure Medical, Inc. organizes marshals and ambulances to ensure the cyclists’ safety. He also formed a group of cyclists, composed of parents and faculty from the exclusive school West Bridge. Their group is involved in civic activities and medical missions.

During their weekend cycling excursions, they photograph mountain ranges and scenic destinations. “Guimaras is a cyclist’s paradise. There is a variety of trail rides, exciting uphill and downhill rides. The air is clean as there are less vehicles,” says Margarico.

Then there are younger groups, such as the Centralian Cruisers Cycling Club (C4) from Central Philippine University and Iloilo Cycling Youth Club (iCyC), who promote biking as a wholesome activity that keeps them out of trouble.

Engineer David Robert Araneta de Leon of C4 has played lead marshall in the city’s bike festivals. C4 advocates the maintenance of bicycle lanes and encourages cyclists to plant trees in mangroves. The group also hands out blinkers to other cyclists for safety. They also organize the weekly sandwich rides. From 8-10:30 p.m., they provide sandwiches to the needy. Then again, when the bike lanes are littered with garbage, C4 picks up the brooms and cleans up.

“As a high school teacher, I can share the advocacy with students and alumni. With friends, cycling strengthens our camaraderie,” says De Leon.

Alia Tesoro, head of the Iloilo Cycling Youth Club, adds that when their group goes for night rides, they bring refreshments to the homeless. On weekends, they join other cyclist groups in tree planting. To maintain the integrity of these youth groups, romances among cyclists are discouraged.

On the advantages of cycling, Tesoro says, “It’s a hobby. From my house to the West Visayas Medical Center is a relaxing five-kilometer ride. I just freshen up before work.”

Entrepreneur and cycling enthusiast Wilfredo Sy set up FitStop, the first bike café. Aside from being a hangout for cyclists, it is also a gallery which showcases bicycle-themed art.

“Cycling for me is exercise and a business to promote an advocacy,” says Sy. He sells second-hand bicycles to make cycling accessible to more people. He then buys new bikes for rent so that people can learn how to ride. The café also shows educational videos on cycling in extreme conditions, such as downhill racing.

An urban planner, Sy has been collaborating with the Department of Public Works and Highways in designing a comprehensive plan for bicycle routes.

“Ilonggos are passionate about their undertakings. They always come up with activities that are meaningful,” says Drilon.

To commemorate the 125th anniversary of La Solidaridad, the revolutionary newspaper, cyclists organized the Ako Si Graciano Lopez Jaena Fun Bike Ride last year. A journalist and hero, Jaena was Ilonggo. In 2013 and 2015, hundreds of cyclists joined the Freedom Ride which extended all over Panay. It was call to end human trafficking.

“The cycling culture is not latched onto a single personality. It’s a collective endeavor,” says Drilon.