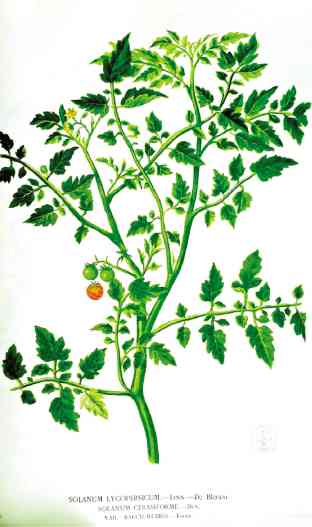 TOMATO fruits in Blanco’s time were less than half an inch in diameter.

What the early Filipinos ate at the time of the Spaniards

Why are people promoting adlai in this country?

I asked this of Felice Prudente Sta. Maria, food historian. The cereal is creating such as stir, just like the quinoa of Peru. Was adlai, also known as Job’s Tears (Coix lachrima), ever part of our culinary landscape?

Felice nodded and then later sent me a copy of the paper she delivered for the 25th Manila Studies Conference last Aug. 30 at the National Commission for Culture and the Arts in Intramuros. It was on “The Culinary Annotations of Fr. Manuel Blanco, OSA, in his book “Flora de Filipinas.”

Father Blanco was an Augustinian cleric and botanist whose book was published in 1837. He identified two species of adlai that originated in Southeast Asia, one called aclai and the other, the sturdier tigbi. Felice wrote how the Chinese “picked large quantities of [tigbi] from Pangasinan and Calamba, turning it into flour that they sold.” She added that Africa today depends on the adlai as cereal.

Adlai is only one of the 1200 botanical entries in the book; there are more than 500 entries “described as being eaten or used in preparation of food and beverage”. Felice decided to group them according to taste, beverages, starch sources, vegetables and fruits.

Sabor acido was Blanco’s word for sourness; he identified the flora that were used as souring agents such as alibanban leaves and the pajo, small mango that were pickled and was a substitute for olives; iba or kamias; bignai and sirihuelas or what we now call siniguelas. There were many other souring fruits cited, but it was only catmon that I knew, those green fruits with fuchsia threads inside and used in sinigang.

There was no word for ensalada (salad), Blanco observed, but he considered dampalit (those small leaves collected from the sides of fishponds), paco fern, singkamas root, and papaya eaten with oil and vinegar as our salad versions.

Sweetness came from fruits made into dulces such as bayabas, cahel, condol, kalamias, lemoncito, lucban (pomelo), rimo. Most of those we still do today, though I have heard from the old folks in the provinces how that particular food art is dying.

Blanco also mentioned pacascas, another dying industry, made from palm tuba, and identified 20 varieties of sugarcane.

As we can all guess correctly, bitterness was obtained from plants like the ampalaya.

The section on saltiness brought me back to Guimaras where I first encountered tultul, that salt block. Felice finally put some science into the words of the salt block maker: “Trees along the beach like tabigui, cegicerras, avicennia and rhizophoras were used in producing a hard rock salt called tap-on in the Visayas. As branches were burned, sea water was sprinkled on them. The salt would later be removed from the ash.”

Not exactly how it was described to me then, but almost like it.

For the anghang, the sili was cited in its various forms—haba, labuyo, pasiti, bilog. It is only Pampanga, Felice wrote, that has retained its old name—lara. From the writings of Jean Mallat who “lived in Manila from 1840 to 1846,” we learn that “pepper from the Philippines was of superior quality” and “how the natives grew tired of harvesting the minute peppercorns and gave up the plant for the cultivation of coffee”—a move that, to Mallat, was regrettable.

Among the botanical beverages, it is cacao and coffee that we know were brought in from other places. Cacao came from Mexico, brought here mostly through clerics, according to Blanco. Felice cites another source, Tomas de Comyn, who wrote in his book “Estado de las Islas Filipinas en 1810,” published in 1820, how cocoa in Cebu was “esteemed superior to that of Guayaquil” in Ecuador.

De Comyn, who was general manager of the Royal Philippine Company, also praised local coffee, especially those grown in Indang and Silang, Cavite. Felice pointed out that Blanco “observed that the botanical [that had originated in Abyssinia] grew spontaneously and wild in Batangas province, and especially in San Pablo town [now classified as part of Laguna province].”

Of the fruits, the most interesting are Blanco’s entries on banana, of which he listed more than 50 varieties. What we know as latundan was brought from the “Indies” by a cleric named Letondal. Lacatan was indigenous to Pampanga but, according to Blanco, was unknown in Manila years before.

Felice reminded me that, in Mexico, tomato is green and jitomate is red. The camatis (tomato) was described by Blanco as a fruit from a one- to two-foot-high plant, but he also described the red fruit as less than half an inch in diameter. Quite small then.

Felice also added observations from other sources about the eating practices during those times. From Mallat, we learn that, “As soon as one enters a house in Manila, rich or poor, for the inhabitants of the Philippines are considerate and polite, they will not fail to offer some of these delicacies accompanied by the obligatory glass of water, a cigar from Cagayan, Gapan and sometimes even aromatic betel, and one is obliged to accept all… for to refuse completely would be almost an offense to them.”

Those are just bits of Sta. Maria’s paper at the 25th Manila Studies Conference which will be published by the NCCA. She rightly concludes, “The flora is a testimony to the important Philippine archipelagic ecosystem with its many localized micro ecosystems that existed as the 19th century commenced. It contributes not only to Philippine scientific history but social history.”

By the way, “Hikay: Culinary Heritage of Cebu” by Louella Alix will be launched on Saturday, Sept. 10, 1 p.m., at the mini theater of QCX Museum, Quezon City Memorial Circle. Tickets to the event include attending the talk and meeting the author, light snacks of Cebu dishes and a tour of the QCX Museum.