Illustrator Jason Palmer at the Manila Comicon: Bring the past back | Lifestyle.INQ ❮ ❯ 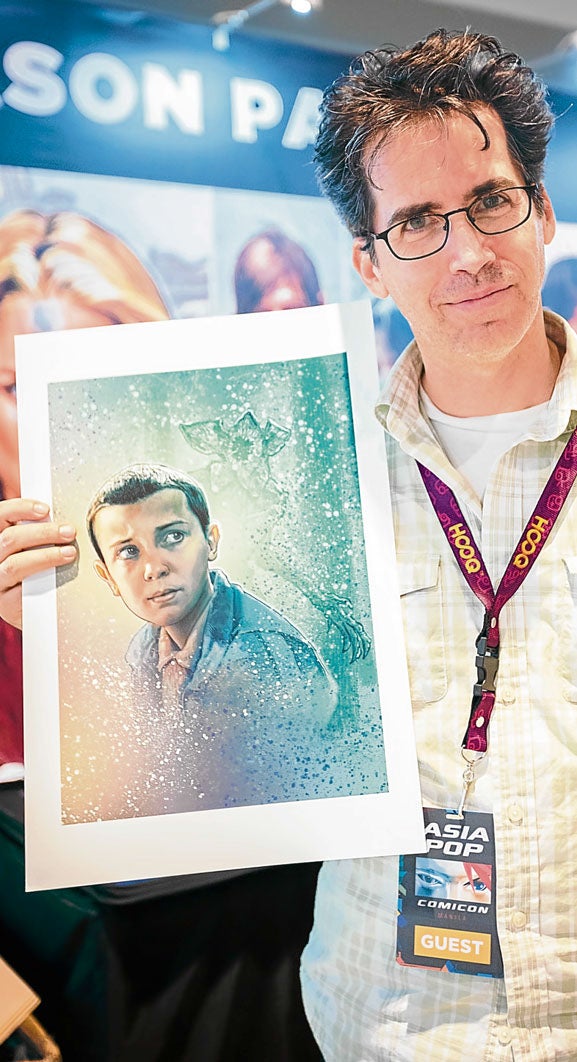 Illustrator Jason Palmer at the Manila Comicon: Bring the past back

The Duffer Brothers are playing all the right cards.

Among their ’80s-inspired aces is poster art by British illustrator Kyle Lambert, which had vintage elements from bygone handpainted movie posters that did not miss out on the vintage photorealistic style with pronounced strokes and points.

And if you’ve binge-watched the Netflix series, Lambert’s poster art pops into mind immediately when one thinks of “Stranger Things.”

The inspiration behind it were the works of Drew Struzan, whose hands are responsible for Harrison Ford as we now picture him as art—remembering the actor’s image on the already iconic posters of “Indiana Jones” and “Star Wars.”

“People are seeing things as illustrated—the Duffer Brothers didn’t just use a photo of the kids and called it a day,” American illustrator Jason Palmer said. “They made it something special. When you think of ‘Stranger Things,’ you think of that poster.”

Palmer had Struzan as his mentor and, like Lambert, replicates the ’80s style with digital tools. He has done licensed art for Marvel, “Star Wars,” “The Walking Dead,” “Doctor Who,” and “Once Upon A Time.”

Instead of waiting for commissions to land on his lap, Palmer instead works on projects he itches to begin with—mostly his own interpretations of popular characters we love—before he gets in touch with the right people to gain rights to publicly produce and sell his works.

He said there are numerous options for aspiring artists to showcase their talent now, saying there aren’t just “two or three ways to get in, there aren’t certain gatekeepers anymore. There are hundreds of ways, you just gotta find yours.”

In the past 28 years, the artist has made it a yearly tradition to go to comic conferences. He now sets up a booth where his fans can find him.

For this year’s AsiaPOP Comicon last Aug. 26-28 at the SMX Convention Center in Pasay City, Palmer drew the fan favorite character of Eleven for the show.

It was an image showing the shorn-haired girl in her well-known pink dress and denim jacket combo, her eyes filled with wonder and guilt.

“Drew Struzan taught me to look at the story that is trying to be told and ask myself, how can I portray that? When I’m doing a print I ask, what’s this about?” he said.

Palmer illustrated Eleven in a fashion that would not look like a derivative from Lambert’s work. As he initially kept drawing the character both ways—badass and cute and big-eyed as he described it—he later on decided to tell the complexity of her innocence and heroics.

“I had to find ways to tell a little more story… In a glance from Eleven’s eyes, nothing is wasted—it doesn’t just say something about a scene, it tells her backstory. Then I’ll put a demogorgon, the idea of a portal. I’ll then draw her looking back—she’s thinking this monster definitely got into our world because of me—that’s how I showed it.”

The artist admitted that he saw himself in the character of Jonathan, as he was about the same age back in 1983. And like how the outcast teen saw art as a way of expressing and understanding the world, Palmer said he mostly kept to himself to draw when he was younger.

“At first you say, ‘look at all the references!’” Palmer said, “‘Jaws,’ ‘E.T.,’ ‘Firestarter,’ ‘Carrie’… But then after a while you’re like, ‘this is just a good story.’ It’s satisfying, it’s polished off, and everything serves the story.”

The series, awash with nostalgic elements from the works of Stephen King, reminded Palmer how the writer’s characters made him reflect on what kind of person he wanted to become.

“Growing up,” he said, “I didn’t have a good father figure. I always thought Stephen King was like a father figure to me because he would write—not about horror—but certain characters who would be doing the right thing despite the obstacles. They always found a way believing in themselves.

“And there were (bad) characters that are similar to others you meet in real life. These people are weak because they do things the easy way—I don’t wanna be that guy. I learned those values from King,” Palmer said.

“So when I see stuff like ‘Stranger Things,’ I say bring those things back—the works of King, and even Stephen Spielberg—polish them up and present it again. These are beautiful things we should take in again and again.”