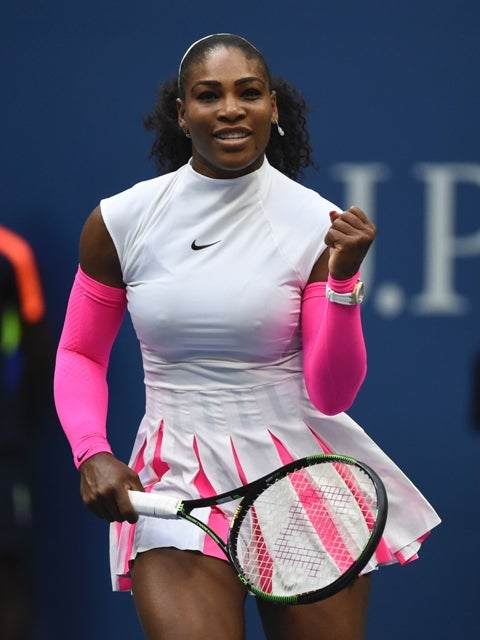 Acid brights have taken control of Flushing Meadows and it all seems rather contrary to the business-like atmosphere in the US Open hardcourts, where players are now scrambling to secure the last major trophy of the grand slam  season.

And yet who’s to say the wildly electric color splash isn’t part of the game? Why not blind or dazzle, depending how you see it (pun intended), an opponent into submission?

Raising the  bar  again are two  titans of the sportswear-active lifestyle industry. One goes all out for geometrics and color-blocking, and the other goes for gradient and contrast. Both have their ball-hitting squads delivering the psychedelic style statement.

For Adidas, Serbian Ana Ivanovic led the pack with the racer-back babydoll Multifaceted Pro Dress. How unfortunate that she made a first-round exit.

Germany’s Angelique Kerber and Romania’s Simona Halep, perhaps based on their mood or the time of day, mix and match jersey tank tops, in colors like Flash Red, with bottoms printed with the collection’s staple geometrics.

Halep seems the edgier gal, often going against the grain with her choice of apparel —and we applaud her for it. Unlike the other ladies in their twirly skirts and slim-fit dresses, the Romanian World No. 5 opts for Adidas’ reinvention of the sports shorts—a pair of printed tights with mesh overlay that looks like a difficult piece to wear. On Halep it looks mighty cool, showing off not just her gams but also her swift, powerful strides.

Jo-Wilfried Tsonga and Alexander Zverev flashed their hot summery brights, too, though we prefer the Frenchman’s neon-red polo tamed with periwinkle Bermuda shorts over the German’s hot pink-lemon yellow ensemble.

Stella McCartney x Adidas muse Caroline Wozniacki of Poland looks unflappable in her color-block dress with marbleized prints on the front and back. Spain’s World No. 3 Garbiñe Muguruza wears the more covetable separates from the same line.

Still, on this tourney absolutely nobody holds a candle to Serena Williams who wears—but what else—Serena Williams for Nike, no less. The collection’s headliner is called NikeCourt Power Tennis Dress, a name that suits the achievements and power game of its collaborator.

Inspired by Serena’s nights out in New York, the high-neckline dress comes in black and white versions. Its pleated skirt fans out to reveal streaks of hot pink, one of the subtler executions of the neon trend at the US Open.

The gradient two-tone pieces in the NikeCourt tennis collection make just as strong a statement, as worn by Canada’s Eugenie Bouchard, American Madison Keys, Czech Petra Kvitova and Britain’s Laura Robson on the women’s side.

Over on the men’s side, we loved seeing the black-and-green combo, especially with the zip shirt and sports jacket, on Aussie Nick Kyrgios, Bulgaria’s Grigor Dimitrov, and Juan Martin del Potro.

But somebody tell the hardworking Argentine to please, please avoid wearing head-to-toe acid green. A very tall guy like him in neon monotone can be painfully shocking to the eyes, and might cause the player on the other side of the net to throw a blinding fit.