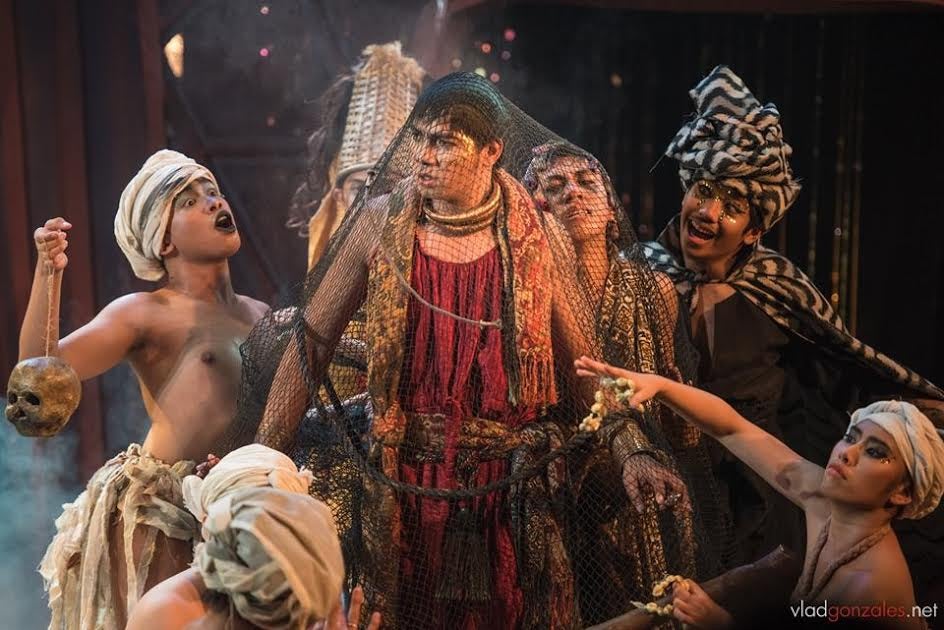 In his program  notes for Dulaang Unibersidad ng Pilipinas’ (DUP) “Ang Katatawanan ng Kalituhan,” translator Guelan
Luarca makes a distinction between two forms of comedy: one in which the viewer only ends up thinking a piece is funny, and one that leaves the audience in stitches, an experience best captured by the Filipino word “halakhak.”

It is “halakhak,” Luarca asserts, that is the intended effect of Shakespeare’s “The Comedy of Errors,” an absurd yarn about two sets of twins separated during infancy who, thirty-something years later, unwittingly find themselves in the same city and wearing the same clothes.

Such moments of rambunctious laughter exist in DUP’s current staging of this comedy, directed by Alexander Cortez. An extended sequence that involves fruits, vegetables and dining implements—all deliberately large and fake—being hurled back and forth from a terrace to the floor below feels like the perfect snapshot of the slapstick spirit of the play.

More often than not, however, “Katatawanan” settles between amusing and agreeable, that state where laughter, as Luarca writes, rings in the mind but never makes it past the mouth. It is a pleasurable enough production to keep viewers glued to their seats with a half-smile on their faces.

Certainly it is not in the technical aspects where “Katatawanan” falls short. Ohm David’s set and Gino Gonzales’ costumes are a visually sumptuous combination, transporting Shakespeare to an Arabian-tavern setting with a gingerbread-house twist.

And PJ Rebullida’s choreography, in the instances when it does not feel expendable, evokes the bustling market life a Mediterranean seaport such as Ephesus, where the play is set, must have had.

It is in the distillation of farce as performance where “Katatawanan” is found wanting. And that is ironic: To have the brothers, both named Antipholus, and their servants, both named Dromios, inadvertently mix their lives up for a day is already a recipe for all-out hilarity.

But though Cortez’s directorial emphasis on physical comedy is evident—there is rather an abundance of jumping around throughout the show—this does not translate well with many of his actors, who seem to have difficulty locating their comic veins; who, for whatever reason, just can’t seem to squeeze the right juices out of a line, an exchange, a scene.

The few who succeed include Gel Basa as Adriana, the hysterical wife of one of the Antipholus twins; Gabo Tolentino as the Dromios who also doubles as everybody’s punching bag; and Bunny Cadag, the bushy-haired quack doctor who makes quite an entrance toward the end.

And when they, along with the rest of this production, hit their stride, the laughs pile on. Alas, such instances are few and far between.

As the saying goes, “dying is easy, but comedy is hard.”

It is an aphorism that also strikes a chord—though for vastly different reasons—in Spotlight Artists Centre’s “Dirty Old Musical,” wittily shortened to “DOM,” which makes use of Filipino pop ditties of the ’70s and ’80s to tell the story of five fictional ex-boy band members who meet for a fund-raising reunion concert.

One may look at the “dying” part as pertaining only to the character of Ricky Davao, appearing only in video as the band’s musical director of sorts who is now gravely ill. But “dying” is also speckled across the band members, these middle-aged men grappling with hair loss, erectile dysfunction and even gender identity.

It is this middle ground of denial between the midlife crisis and full-fledged “senior-hood,” librettist Rody Vera writes in his program notes, that is the concern of “DOM,” as conceptualized by musical director Myke Salomon and producer and actor Robert Seña.

Often, though, it all feels like a case of the idea sounding better on paper than it looks fleshed out onstage. The story is spread too thin, and the jokes fall flat. And it is not a good sign when the first act’s dramatic ending is anchored on priapism (Google that), even worse when that is intended as a comedic highlight.

It is when the dialogue ends and the music begins that the show as a whole feels richer in both its storytelling and characterization. In fact, it is sad that the Music Museum, where “DOM” closes tonight, has such inadequate acoustics for musical theater, because the music-making at play is just terrific.

It is not just the singing—for example, Fred Lo’s gorgeous take on Florante de Leon’s “Sana.” It is also Salomon’s orchestrations, the way he refashions Gary Granada’s “Kaibigang Tapat” into a thrilling a capella number, or spins radio hits like Ryan Cayabyab’s “Nais Ko” and “Kay Ganda ng Ating Musika” into integral parts of the narrative.

The music finds its match in Dexter Santos’ direction, his emphasis on movement well-suited to this production. His choreography effectively aids in the suspension of disbelief, the limber dancing among these men starkly contrasted with their bodily woes once the singing ends.

Among the cast, Nonie Buencamino delivers the truest, most effortless portrayal of a DOM, or dirty old man, as Filipino slang goes.

John Arcilla, now quite famous as the temperamental titular character in Jerrold Tarog’s “Heneral Luna,” brings a similar dramatic intensity to the show, and unveils a soaring singing voice that is unfortunately rarely heard nowadays.

His duet with Buencamino on Jim Paredes’ “Nakapagtataka” is a genuine musical theater moment, its smooth unfolding of emotional layers at once propelling and deepening the story.

Two numbers before that, however, is when the musical really lights up and hits its stride. Probably nobody else this year could make an entrance quite like Michael Williams—red jacket, red shoes and “Kay Ganda ng Ating Musika” at the ready. The laughter that greets the sight of him is unmistakably one thunderous “halakhak.”