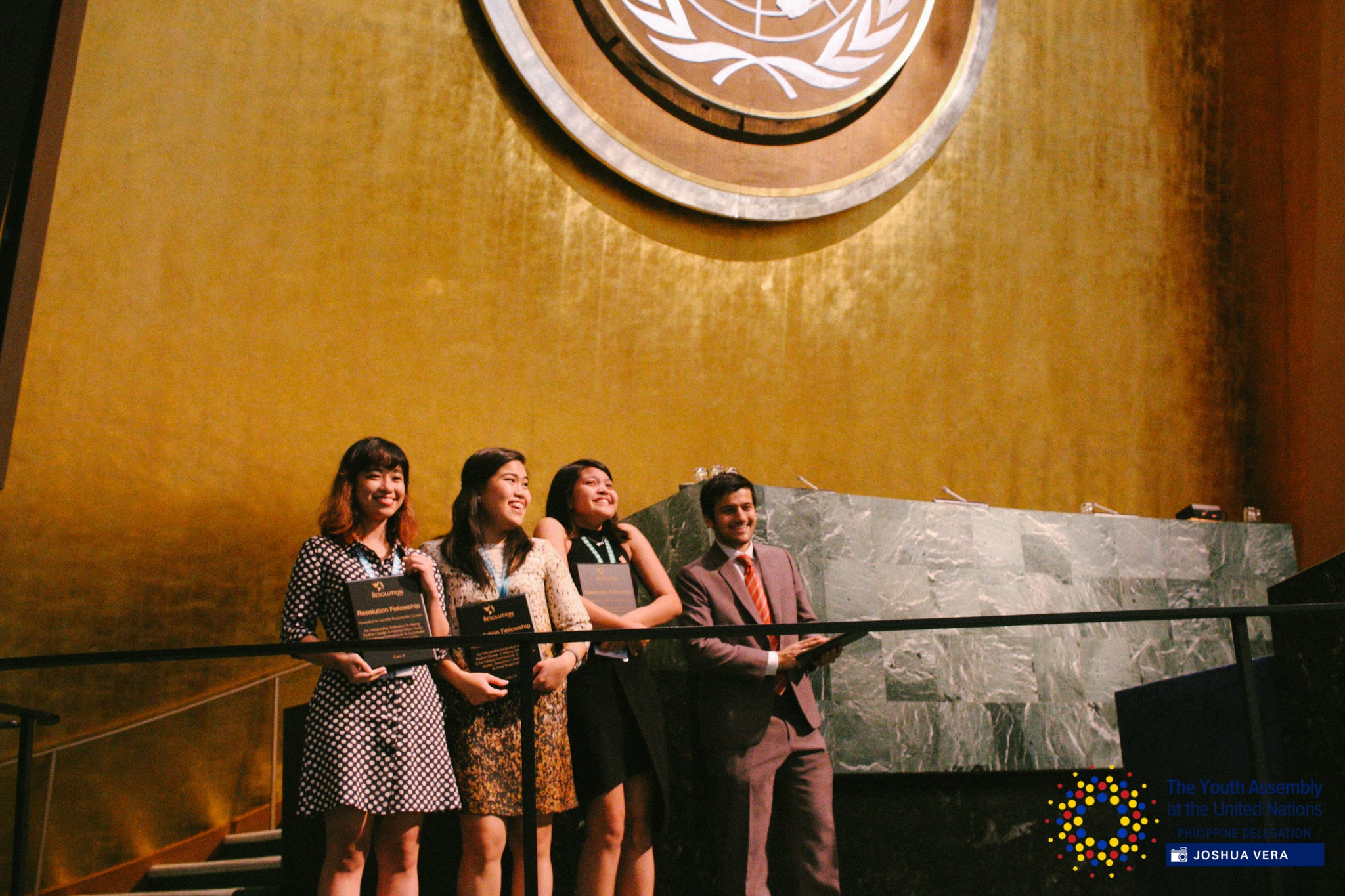 Still, no one was more surprised than Recio, Nolasco and Sianghio.
Making their way to the stage from their seats high up in the hall, the trio was a bundle of emotions, laughing and crying at the same time.
“It was a theatrical moment,” recalls Recio. “I wasn’t processing anything, I was just moving. Then when I got up on the stage, I was like, ‘This is new!’”

It’s also a vote of confidence for a project with a heart.
Recio, Nolasco and Sianghio are co-founders of Pamana (“heritage”), a nonprofit social venture that seeks to improve the crop selection, solid waste management and irrigation practices of indigenous farmers and small-scale farming communities in the Philippines through a combination of science and technology with local know-how.
Improved farming practices mean better yield, say the students, and, more important, sustainable lifestyle and agricultural practices.

Also named winners were Queens, New York’s Madel Beaudouin, whose Queens Entrepreneurship Fund will provide training opportunities to Queens College students so they may extend consultation services to small businesses in the district surrounding the Queens College campus; and Shanghai, China’s Xiaoyue Gong, whose foundation Aeo plans to address the dangerous health consequences of indoor air pollution through a network of air monitoring devices and an app that can give users access to air quality information.

The Resolution Project identifies and inspires young, promising leaders through its Social Venture Challenge (SVC), a competition among undergraduate students from around the world to pitch relevant, impactful and socially responsible projects that address pressing social issues.
This year, Pamana was one of the 22 teams to make it to SVC’s semifinals, one of seven to reach the finals and one of three winners.

The beauty of Pamana is that it was born out of a simple and sincere desire to help.
Recio, who climbs with the Loyola Mountaineers, happened to be with the group in Tanay, Rizal, when she came across a community of Dumagat. Though known for keeping to themselves and being wary of strangers, the 30 or so members of this indigenous tribe were a warm, welcoming lot.
After Recio and her fellow mountaineers emerged from a swim in a nearby waterfall, they found a plate of harvested corn waiting for them. “It was like walking into a friend’s house,” she said of her interaction with the tribe.

To reciprocate their kindness and generosity, Recio, in a dialogue with the community, asked if there was any way they could be of help.
The Dumagat, who converse with a mix of Filipino and Dumagat words, presented a list of concerns; health and education were among their chief issues, but Recio chose to focus on another top priority: farming.

As their sources of sustenance and income, the agricultural yield of the community—corn, rice, root crops, garlic, and bananas—had dipped in quality and quantity. Soil and climate change were identified as causes of poor yield, so was limited farming methods.

Dole-outs were not an option; instead, complete independence and improved quality of life were the objectives.
“We wanted to provide sustainable solutions, something they could own, something that could carry them through,” says Recio.

To achieve these goals, the 21-year-old fourth year AB Management Economics major called on two of her dearest friends.

Twenty-year-old Nolasco is a senior Interdisciplinary Studies major (and To Be You contributor), and 21-year-old Sianghio is an AB Management Economics major, with minors in French Studies and Development Management. “Dana [Sianghio] and I are blockmates and thesis mates, so I know how she works from an academic level,” says Recio. “She’s a fireball, she’s very active in and out of school, and she can handle responsibility.”

Nolasco “is my closest confidant, she knows me on a personal level,” says Recio. “She also has a passion for design and words and I felt that those skills would bring out the best in us.”
Recio is president and overall coordinator of Pamana, Nolasco is vice president of communications, marketing and branding (she designed Pamana’s logo), and Sianghio is external relations vice president as well as in charge of logistics and finance.
The task of helping an indigenous community enhance its current farming methods is as much a learning experience for these girls.
“We were transparent from the start,” says Recio with a laugh. “We said we would bring in our friends who know better than us.”

And what friends they are: Recio tapped her agriculturalist contacts from the University of the Philippines Los Baños; Nolasco sought the advice of her uncle, plant geneticist and former Philippine Rice Research Institute executive director Eufemio Rasco, Jr., PhD; and Sianghio got help from her grandfather, Rolando Sianghio, producer of Happy Soil, a brand of composting medium made from organic waste.

“Our plan of action and strategies change with every community,” notes Nolasco, “so it’s important for us to be 100 percent involved in discussions. The community has a say in everything and we come up with solutions together.”

“Pamana, more than anything, is a model that we’re trying to perfect so we can offer it to other indigenous communities all over the Philippines,” sums up Sianghio. “Maybe even send it to the President’s office and see what he can do!”

Ultimately, Pamana is set to change many lives—including the ones of those who conceived it.
“Yes!” the girls scream when asked if this experience has made them rethink their plans after college. Nolasco, whose goal was to work as graphic designer for an advertising agency, now says she wants to “use my skills in communication for sustainable development. My dream job is to work for the United Nations. I want to work for Unesco so badly.”
Ditto for Sianghio: after setting her sights on a master’s degree and career in the corporate world, she’s considering working for government and eventually the UN.

And Recio? A longtime fascination for urban planning may just give way to her growing interest in rural development.

Visit www.facebook.com/PamanaPhils to partner or volunteer with the group.