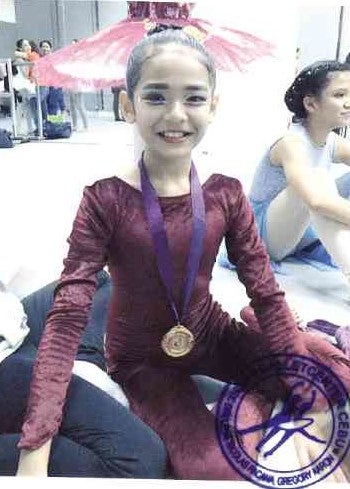 Cebu’s two main exponents of classical dance are in celebratory mood. They participated and scored well in the Philippine Dance Cup ballet competition at De La Salle College of St. Benilde in Manila.

Johanna Mangubat of Cebu Centre for Dance says that they entered only two students in the Classical Solo Female division which had a total of 56 competitors from all over the Philippines.

Bernadette Sinues was overall winner of the Junior Solo division, and Veia Lampert was in second place for the same category.

Josh Romayla, company manager, informs Cebu ballet enthusiasts that Balletcenter will present a full length production of Coppelia in November. The casting has been done, and rehearsals are underway.

Speaking of November, Glenna Fernan Guidicelli tells us to circle Nov. 18 in our calendars. That’s the night her son Matteo Guidicelli will perform in a concert with other stars at the Waterfront Cebu City Hotel.

Still speaking of November, the Radisson Blu Hotel Cebu will celebrate its anniversary on Nov. 10 with a grand event at the lobby. Highlight is the early lighting of its towering blue Christmas tree.

On the calendar we’re also circling various dates. On Oct. 8 is the grand reception and ball hosted by the Casino Español de Cebu to celebrate Dia de la Hispanidad, which is actually on Oct. 12 but the Saturday nearest to it is usually chosen.

Expected to come is Spanish Ambassador Luis Calvo with his wife Maria Jose and their son Lain. They will be billeted at the Marco Polo Plaza Hotel.

That’s keeping you quite busy, we told Casino Español general manager May Ocaba. “Yes,” she answered, “And there are many other events like the annual celebration of Oktoberfest, this year on Sept.  28.”

“There’s the Prime Rib Roast night,” reminds May about the monthly event at the club’s El Comedor. This is usually on the third Wednesday of the month, hence Sept. 21.

It is quite a hit with the members, states May, who adds that the last one on Aug. 17 registered about 50 diners.

And speaking of Christmas the Shangri-La’s  Mactan Resort & Spa has set its Christmas tree lighting ceremony for the evening of Dec. 1, a Thursday. “Less traffic,” says communications director Cassandra Cuevas. A week later, on Dec. 9, is the anniversary gala of La Chaine des Rotisseurs—Cebu chapter.

Cassandra is off to Amsterdam, Cologne and Vienna with her mom where she’ll spend her birthday on Oct. 1. They plan to see the Spanish Riding School, the imperial apartments at the Hifburg and Schonbrunn, and perchance the ballet “Le Corsaire” at the Vienna State Opera. Happy trip!