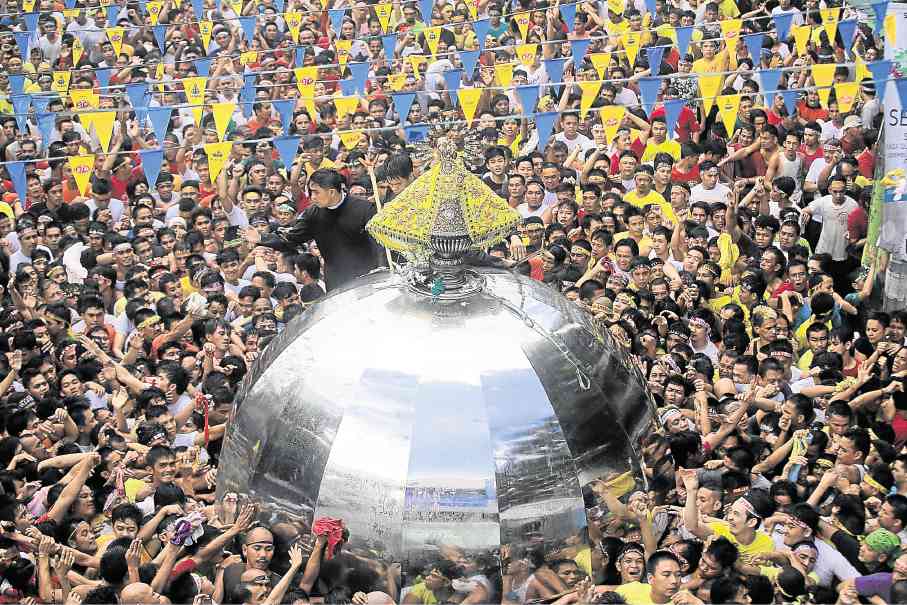 REACHING OUT TO ‘INA’ Thousands of devotees press close to the image of Our Lady of Peñafrancia as it is carried on a dome-shaped carriage through the streets of Naga City, Camarines Sur province, on Friday. The annual “traslacion” procession marks the start of the nine-day religious fiesta that ends with a fluvial parade. MARK ALVIC ESPLANA / INQUIRER SOUTHERN LUZON

NAGA CITY—For Raul Alcomendas, his wife Josie’s recovery from the severe stroke she suffered in 2003 was a miracle bestowed on her by the image of Our Lady of Peñafrancia.

Alcomendas, a visual artist, had painted the Bicol Patroness, lovingly known here as “Ina,” several times. The centuries-old image is celebrated with an annual fiesta in this city from

The wooden image is garbed in an embroidered cape called “manto” (mantle) that devotees believe to be miraculous and would borrow for healing purposes.

“My wife was in a coma for five days until Ina’s mantle was placed on her breast, and that woke her up,” Alcomendas recalled of the manto he had borrowed from the caretaker of the image.

The manto is kept in an altar at Basilica Minore and taken to Naga Metropolitan Cathedral during the novena that celebrates the September religious fiesta.

“When my wife suffered a stroke, she was taken to  Mother Seton Hospital where she stayed for two months,” Alcomendas said. “She was taken to Cardinal Santos Hospital in Manila when she became comatose and that was when we placed Ina’s mantle on her breast,” he added.

Alcomendas said he became a devotee of Ina after his wife’s miraculous cure.

The wooden image of Our Lady of Peñafrancia was sculptured in 1710 by natives called “cimarrones,” enslaved Africans who had escaped from their Spanish masters’ cruelty and had lived together as outlaws.  Standing 43.18 centimeters tall, the image is a version of the Virgin Mary with the Child Jesus, and is said to be painted with dog’s blood, apparently because the first recorded miracle attributed to it was on a dead dog, said to have been revived after being thrown into Naga River.

The devotion to Ina started 316 years ago after it was introduced to the natives by Fr. Miguel Robles de Covarrubias, a Spanish friar who was ordained here and was a devotee of Our Lady from the mountains of Peña de Francia in Spain.

The devotion to Ina is highlighted with a “traslacion” procession that has an all-male phalanx of image carriers called “voyadores.” Women stay on the sidelines lest they earn the ire of Ina, or so the folk belief goes. The procession marks the beginning of the nine-day religious festivities that culminate in a fluvial procession on Naga River.

Alcomendas’ story of his wife’s miraculous healing was just one of many similar testimonies compiled in “INA: Little Stories of Faith,” which was published by Peñafrancia Tercentennial Inc. in 2010.

One such story was that of Eleonor Alfelor of Iriga City who had a vehicular accident on May 29, 1979, that left her paralyzed from the waist down because of a damaged pelvic bone.

On the urging of Msgr. Sofronio Balce, who visited the patient in the hospital, Ina’s manto was placed over Alfelor’s body repeatedly until she recovered and was able to walk.

“During moments when I felt hopeless and believed my life was wasting away, I clung to the cape as my potent force toward recovery,” Alfelor recalled.

Jojo Cadiz, born here on June 22, 1955, shared the story of his healing with the help of the manto when he was operated on for a congenital dermoid cyst lodged between his lung and ribs.

“I needed an operation immediately, otherwise I would die,” Cadiz, now 61, said. “It would be the first operation in the Philippines on a 2-month-old baby,” he added.

Cadiz said Msgr. Alfredo Yllana gave Ina’s blue cape to his parents who placed it under the pillow while he was being operated on at Philippine General Hospital.

“My mom and dad prayed long and hard for Ina’s help while the surgery was being done. Lo and behold! I was voraciously sucking milk from my mother’s breast immediately after the operation and was released from hospital in just a week,” Cadiz said.

Joselita C. Magcase was operated on for stones in her gallbladder in December 1981, when the doctors discovered tubercular bacteria all over her liver and stomach. Though she survived the operation, on Jan. 31, 1982, Magcase slipped into a coma because of internal bleeding caused by liver malfunction.

“An officemate of my husband lent me a cape of the Virgin of Peñafrancia, which was placed underneath my pillow. Three days after my birthday, I woke up. I celebrated my birthday knowing deep in my heart that God had given me a new lease on life,” Magcase said. TVJ