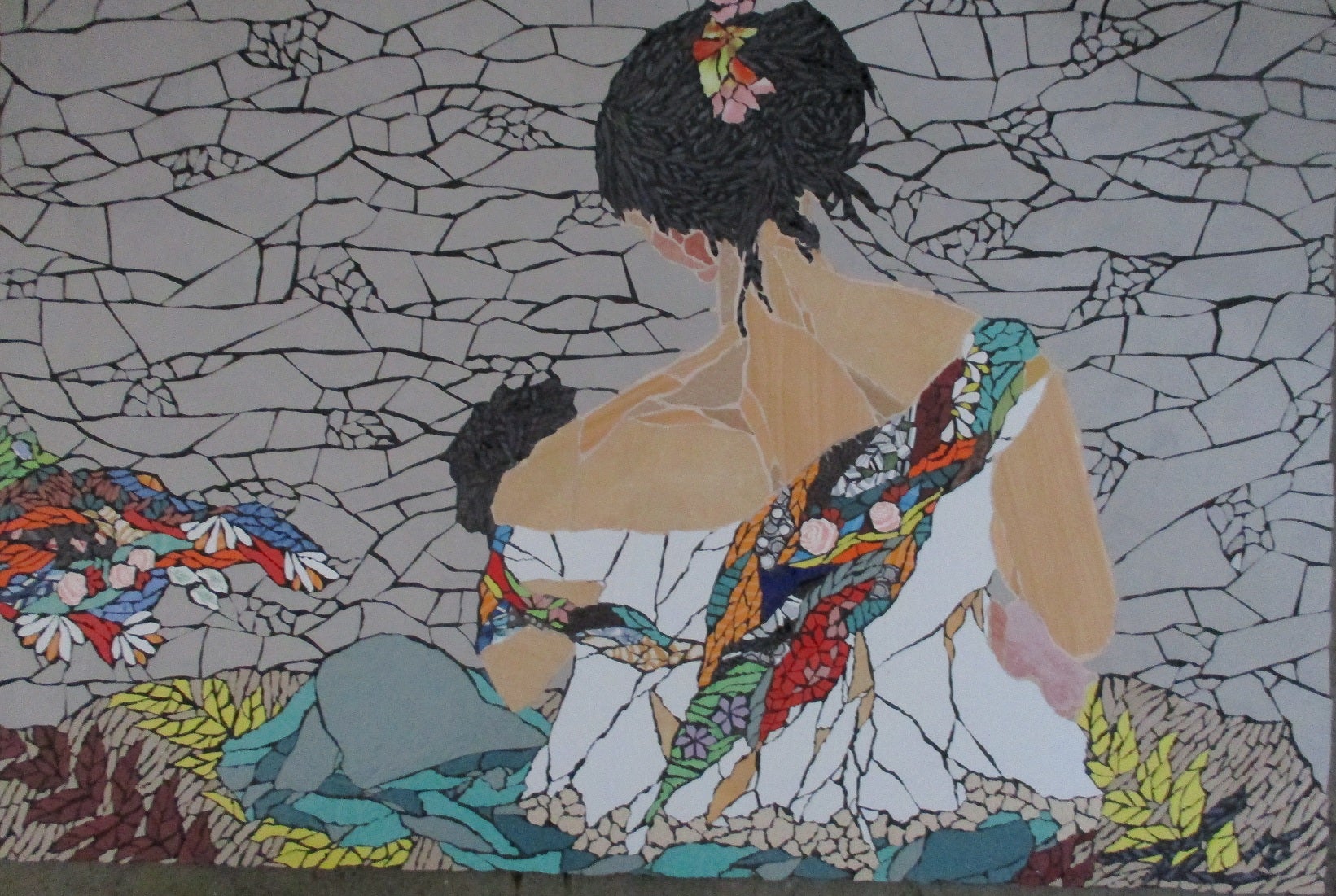 Wholeness out of brokenness in Lisa de Leon-Zayco’s ‘Panuelo’

TO THIS day, she can remember one childhood memory. At the age of 5, her hands lovingly caressed a tabletop made of various broken pieces of tiles, assembled together in a pleasing spread of design, and scintillating elegantly with gleaming colors that seduced not only her sense of sight but, more mysteriously, her sense of touch.

Lisa de Leon-Zayco has not forgotten that moment; indeed, was telling herself that one day she too would create such a beautiful object. To be sure, Zayco had never heard of the quaint, unusual word “mosaic.” But 50 years later, Zayco has found herself literally in the thick of mosaic-making.

This year, Zayco presents a solo exhibition of her mosaics at Ricco Renzo Gallery titled “Panuelo.” Zayco’s homage to that triangular piece of cloth that completes the Filipina’s native attire of baro’t saya and tapis is symbolic of the Filipino woman’s contrasting virtues of vulnerability and strength.

Mosaics are an ancient art form created from an assembly of small cut pieces of marble, stone, pottery, glass or shells. Mosaics decorated the floors of ancient Greek and Roman temples and villas.

In Philippine art, the adoption of mosaic has been neglectedly nil, such that the only name one can recall is that of Elizabeth Chan, who did mosaic pieces for the Santa Cruz Church and the “Annunciation” at the church of Ina Poon-Bato. Other than these few works, the country might as well be in the Dark Ages, so unenlightened, and uninterested, is the local art community about the wonders of mosaics. Essentially, the problem is that mosaics are regarded hereabouts as craft, not as art.

Zayco will conduct a workshop on Nov. 20 at the Glass Bar of the Crescent Moon Café in Antipolo, at the invitation of her friend Lanelle Abueva-Fernando and her daughter Jali. She will generously share her knowledge, in view of the fact that, back in 2011, Zayco herself benefited from a two-day workshop in mosaics conducted by Gigi Mondonedo-Campos in Bacolod.

Of that workshop, Zayco recalls that on the last day, she despaired of her own work, looking, in her own words, “drab and hurriedly done.” As in most things in life, inspiration and serendipity can conspire to create a most unexpected result: Zayco lit on the image of a Japanese geisha, inspired by the famous memoirs, giving the finished work the title “Sayuri,” which of course is the name of the character in the book. “From then on I was hooked,” exulted Zayco.

That enthusiasm would lead her to the fulfillment of another dream: her own solo show, which her father had always predicted for her. It was Capt. Jose “Pepe” de Leon, who had always encouraged her daughter to be in the arts. An international pilot, he was an artist by avocation, and a close friend of the late Bacolod artist and pilot Lino Severino.

In his autumn years, De Leon had collaborated with Zayco, doing the designs which her daughter rendered in mosaic. Six months after his passing, Zayco held her first solo show, dedicating it to her father.

The laborious work behind mosaics would be enough to discourage any aspiring mosaicist, but not Zayco.

“No, I don’t feel discouraged, in fact I feel more challenged to create softness, flow and warmth, using very ‘cold’ materials. Perhaps the only drawback is time. A single brushstroke may take a few seconds, but to create that brushstroke in mosaic would take 30 minutes at least.”

Already there are affirmations of the quality of Zayco’s works. She was commissioned by the Fundacion Sansó to recreate in mosaic one of the works of the master, Juvenal Sansó, whose trademark bouquets of flowers and ever present moon were punctiliously captured by Zayco’s assembled multitude of glistening tesserae, delighting the artist himself. Another of her works was chosen to grace and symbolize the National Breastfeeding Congress.

Moreover, Zayco was among the artists featured in the recently launched coffee-table book “The Philippines’ Best,” published by Sorrell Publishing, New York.

Clearly, Zayco has found in mosaic the avenue and instrument for the expression of her own creative spirit. “Why mosaics,” she asks. “Because through all the downfalls and challenges life threw my way, I rose from the rubble, picked up the pieces, and was made whole. Only in brokenness are we made whole.”