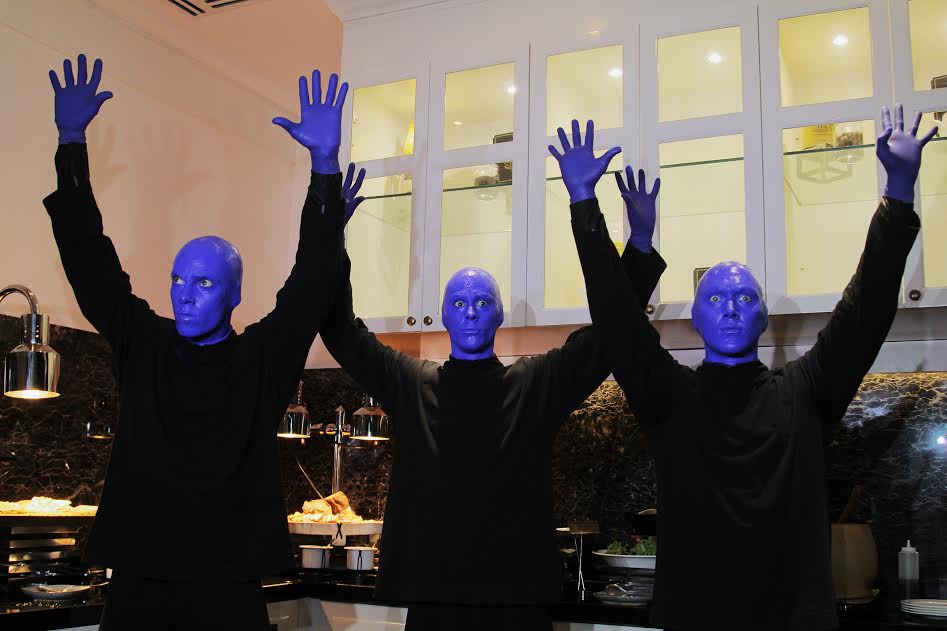 THREE-MAN group has been a global success in staging comedies, rock performances and dance parties in an eccentric way.

Top 3 reasons why you should watch the Blue Man Group

THE BLUE Man Group (BMG), a show composed of three bald performers with bodies covered with blue paint, has been a global success in staging comedies, rock performances and dance parties in an eccentric way. And the Philippines will be able to see them live this month.

For 25 years, the award-winning group has wowed audiences from different parts of the world like China, United States and South Africa with its fun musical performances underscored with magnificent lights and dances. It recently had shows in Macau and Singapore and is now on its way to Manila.

We list down three reasons why Filipinos should watch the BMG at The Theatre at Solaire on Sept. 14 to 25.

1 BMG wants you to get connected and be surprised

Michael Rahhal, one of BMG directors, says that people nowadays get to be consumed by technologies such as smartphones and the internet. The aim of their show is to let people have a chance to interact, not only with the performers, but also with their seatmates.

“What we try to create over the course of the show is an opportunity for an audience of strangers to come and ultimately have an experience together,” he says. “Every object that [the Blue Man] interacts with in the show has the potential to help him feel connected to the audience,       or help the audience feel connected to one another,” he said.

2 BMG is a one-of-a-kind audio and visual showcase.

The only thing that the Blue Man cannot do is speak.

However, to communicate with the audience, BMG uses quirky items, musical instruments, lights and art installations. BMG says that it wants to take away the idea of language so people can have their own individual interpretations and experiences.

BMG performers seem to exhibit only one shade of color but the whole performance will be highlighted by colorful sets and props. Audience should expect lots of percussion and rock performances. The actors will also stage several comedies, dances and skits.

3 BMG will give you a unique break from reality.

Audiences are advised to open their minds to welcome new ideas that the show will be bringing. A viewer must ease himself out of his comfort zone while watching the performances, says Rahhal.

“We allow the audience to take part of the show. I have to come out of my shell a little bit as an audience member in order to experience it,” Rahhal says. “It takes some thought, processing and openness to take an experience away from the show.”