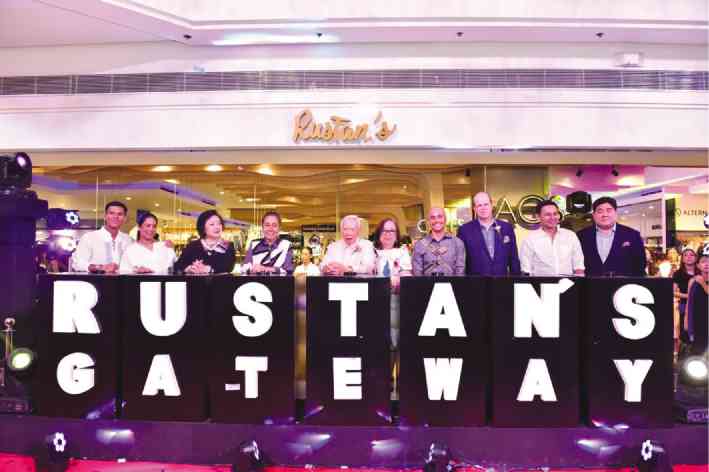 Four generations of Tantocos and two generations of their decades-long friends and landlords, the Aranetas, joined hands Saturday for the formal unveiling of the expanded Rustan’s Department Store at Gateway Mall in Araneta Center, Cubao.

Rustan’s Gateway underwent an eight-month renovation and expansion, and is now three times its original floor area, at about 10,000 sq m, with four levels of retail areas.

“You can’t imagine how happy we are to see all of these happening at last,” said Zenaida R. Tantoco, chair and chief executive of Rustan Commercial Corp., shortly after the ceremonial lighting of the store’s signage. “I’ve always wanted a beautiful store in Cubao and now we’ve realized it.”

Rustan’s has been in Cubao for 42 years, its original location, which has been turned into a transport terminal, is adjacent to Gateway Mall, which opened in 2004.

With the worsening traffic in the metro, Donnie Tantoco said the company felt the importance of bringing “as much as what Rustan’s is well known for to our customers in the north.”

He acknowledged his aunt and boss’ efforts not only for having enlarged the Gateway outpost, but “she also skillfully and thoughtfully made a store with a much stronger offer and much better shopping environment for home, fashion, beauty, children’s, Filipiniana.”

Donnie Tantoco also paid tribute to the friendship between his clan and the Aranetas, and spoke of the Tantocos’ “deep pride and long historical presence and commitment… to the Araneta Center.”

“In an era when everything is about technology, we still strongly believe that relationships matter a lot,” he said. “Our focus will always remain on building stronger personal and human relationships. One relationship that we value and has stood the test of time, is with the Araneta family… We thank the Araneta Group for nurturing many years of solid friendship and partnership.”

Rustan’s has lined up several activities for its patrons in September, as well as raffles, with a minimum purchase. Prizes include family vacations in some of partner-hotel Novotel’s overseas locations, and a Toyota Fortuner.

The expansion of the Cubao store is part of Rustan’s ongoing development. It has just concluded the revamp of its outlets in Shangri-La Plaza Mall and Cebu. The Alabang location is next on the agenda, according to its CEO.