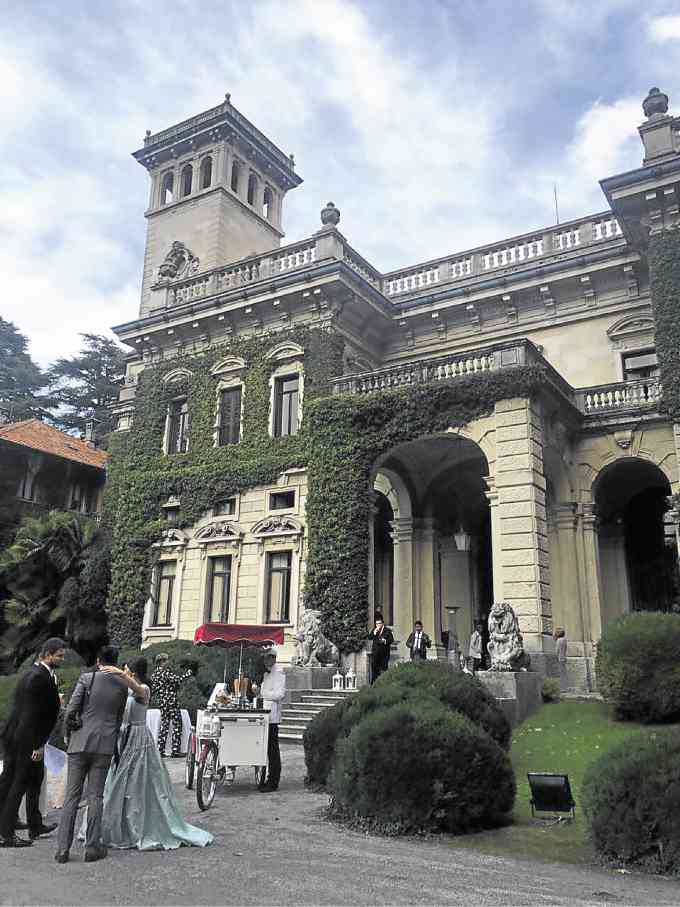 GUESTS start to arrive at Villa Erba, with Dr. Vicki Belo in celadon gown welcoming them.

COMO, Italy—“Thank you, God. You gave me the sun!” an ecstatic Cristalle Belo Henares exclaimed, her eyes sweeping the breathtaking view of Lake Como outside of her villa room.

By now, this noon, the sky had cleared, revealing the mountains beyond—the high-end (literally) real estate in Italy dotted with villas owned by the rich and famous (e.g. George Clooney).

Just the night before and early this morning, the weather was gloomy; it had rained practically nonstop, just as the weather forecast had said. In the tail-end of summer and the cusp of fall, it was cozy bed weather. Not wedding weather!

But the bride, who, with family and close friends, flew all the way from Manila to Como in northern Italy just to have her dream wedding with her beau, Australian hotelier Justin Pitt, was unfazed. Cristalle needed and wished for her sun—this young woman known in Manila to be just as headstrong as her mother, Dr. Vicki Belo, who single-handedly helped shape the Philippine beauty industry.

Now, she had just been given her wedding-day sun. The rains had stopped, thus her gratitude expressed as she sat behind the desk writing her note to her groom. She was in her delicately elegant lace wedding dress, practically already done with the de rigueur pre-wedding shoot with her entourage at the Villa Calvi, where her family and entourage have been staying.

Running along the foothills of the Alps is Lake Como, a beautiful blue spread that they say is wishbone-shaped, a perceived symbolism for wishes bound to come true.

On Sept. 15, at 5 p.m., the couple were wed—in the soft glow of the afternoon sun in Christian rites at the centuries-old Villa Erba.

Shortly before 5 p.m., guests started streaming onto the vast manicured gardens of the villa, the men in suits, the women in long evening wear. The weather was comfortably cool enough to allow such fashion; the chill wouldn’t come until the cruise in Lake Como later.

The grand and imposing structure of the villa loomed big in the faint sunlight, making the crowd seem all the more sparse. It was, in fact, sparse because only 100 (98, to be exact) had been asked to witness the exchange of vows.

Villa Erba should be known to cineastes as the (former) home of the famous director Luchino Visconti, where he completed the editing of one of his masterpieces, “Ludwig.” Visconti’s ancestor, Luigi Erba, was a leading pharmaceutical industrialist of his era who built the villa, after the tenure of the Peluso family.

The villa used to be a monastery. It is said that the Erba family turned it into a social and culture hive in their time, particularly after a daughter, Carla, married the Duke Giuseppe Visconti, the father of Luchino who would be a director.

It was also at Villa Erba where Gwen Stefani’s music video of the song “Cool” and scenes of the movie “Ocean’s Thirteen” were shot.

Cristalle and Justin ingeniously scouted the location and flew a few times to Italy to make the arrangements, including the accommodations in the nearby Villa Calvi, all by the famous lake.

We never met a more meticulous and fastidious couple; no detail, it seemed, was overlooked.

That afternoon, what greeted the guests out to enjoy their cocktails was the quaint sight of a gelato cart at the foot of the grand steps—a local chic touch amid ancient splendor. In between sips of cocktails, guests helped themselves to interesting gelato flavors.

The hall inside the villa, lined with arches and covered with the flourish of Renaissance-style art, was just of the right size to accommodate the few chairs for the few guests. The platform where the couple exchanged vows was decked simply with flowers.

The bride and her entourage walked down the path blanketed with petals in a canvas of autumn colors.

Without fanfare, to string ensemble music, the entourage entered, starting with the groom and his groomsmen who took their places on the platform, followed by the bride’s entourage—her childhood best friend Timi Gomez Aquino, who was matron of honor; Noelle Hilario, her cousin Celine Willard, and Ruffa Gutierrez. They were in silvery gray chiffon long dresses by the bride’s designer-friend, Czarina Sarte.

“They each represent a part of my life—my childhood, student days at Assumption, and my family,” Cristalle told us earlier.

The children in the entourage, including Scarlet Snow, didn’t steal the limelight from the bride, whose entrance the entire hall awaited with bated breath (at first, Scarlet waddled to and fro, lost about how to proceed, until she gained her steps and lurched on—to the crowd’s applause).

At last, all eyes were on the grand staircase at the end of the hall. The bride emerged at the top, then as the assembly fell in complete silence, Cristalle walked down each step, with such feminine confidence and elegance that left us wondering—how does one do that in today’s stratospheric heels?

Her face wore a soft yet seductive smile, her curvaceous body so strongly defined in the lace hugger couture by Israeli designer Inbal Dror, now the favorite of brides the world over. The long simple train unfolded as she reached the foot of the stairs, where she was met by her father, businessman Atom Henares.

Together, father and daughter walked down the short aisle. At the end of it, right before the platform, the groom met his bride, but not before Cristalle reached out for her mother Vicki, and the bride stood beside her parents.

That was a most touching sight—this 32-year-old woman giving honor to her parents who, even if they had parted ways and are now leading their own lives, remain one in their love for an only daughter.

Their son Quark, the acclaimed filmmaker, read lines from the Bible during the rites, and so did the groom’s only sister, who flew in from London.

The pastor enjoined the couple to give selfless devotion to and love for each other.

The rites over, the guests were ushered to the boat for a sunset cruise around Lake Como, where they spotted the villas of celebrities such as Clooney and Steve Jobs. Towards the end of the cruise, the newlyweds, in a separate boat, sailed alongside their guests’ boat.

The cruise was followed by the elegant reception back at Villa Erba. This time, the sight of the candlelit fresco-covered hall drew gasps from guests. Two tables ran from one end of the hall to the other, traced with soft light emanating from crystal candleholders and covered with arrangements of pastel blooms. Gray shawls were draped on each chair, to keep the guests warm.

It was obvious that, being a hotelier, Justin paid detailed attention to his wine.

He was the general manager of the Anantara resort hotel when friends such as Frank Briones introduced him to Cristalle. He looked after her during her vacation in Abu Dhabi, and as Inquirer Lifestyle wrote in a story about their romance, he curiously gave up a chance to make a cameo appearance in the “Star Wars” movie being shot in his turf to be with Cristalle in Manila.

Atom Henares gave a most touching toast as he recalled how parents such as they could have a “perfect daughter,” in the words of Cristalle’s Montessori teacher in grade school.

The groom gave toasts to their parents, Vicki and Atom, and Roger and Leeann Pitt. Roger welcomed the guests the night before, at dinner.

Justin thanked warmly the bridesmaids who helped Cristalle every step of the way in this wedding.

We have seen many destination weddings, and 2016 has seen the weddings, one after the other, of so-called “It” girls.

Ancient villas, a cruise on Lake Como, tenors-serenaded dinner—all these easily make the Pitt-Henares wedding hard to top as the wedding of the year.

But it’s the toasts of their loved ones that let us know that, in the midst of abundant blessings, well-blessed young women like Cristalle will not live only in fairy tales.