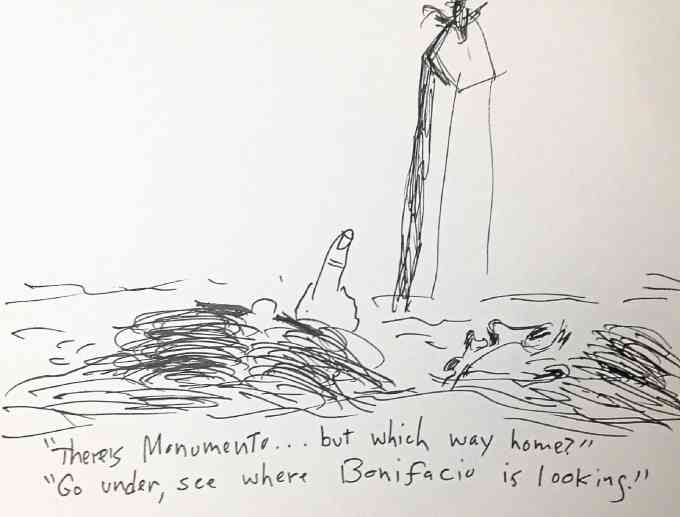 Memories of a tropical spring 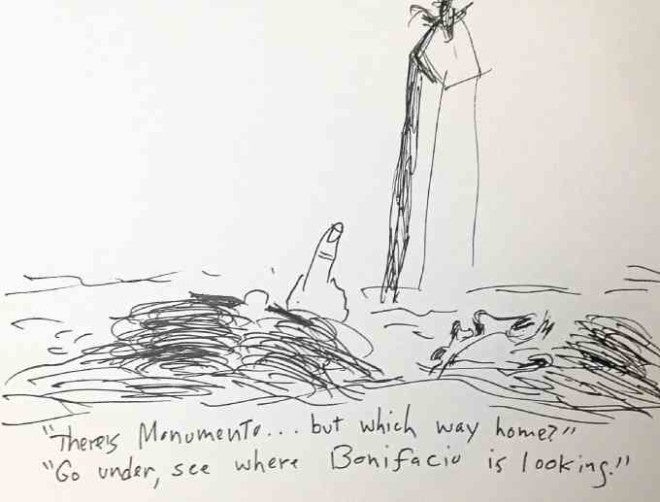 MONUMENTO—that’s where the story of my hometown begins and ends for me. It was the true north of my own commuter compass, the point from which I sallied forth abroad—to college, to work, to fancied destinations—and to which I referred back on my homecoming.

Rising 60 feet from the center of a rotonda that exits on four roads into Greater Manila, it came into timely view for a visitor anxious for a reassuring sight or a commuting native just happy to be home soon, like me. No other monument I know has taken its generic name for its proper name, but, lest that singularity be taken as owed merely to popular convenience, it is for me the most inspiring representation of my people and race. It is officially dedicated to Andres Bonifacio, but he is joined on it, in a bronze tableau around the obelisk, by 22 other figures from the nation’s revolutionary history and literature.

Monumento is not even a part of my native Malabon; it stands a good two kilometers away, in Caloocan City. Still I couldn’t help being proprietary about it; its creator’s deep connection to my barrio, not just to my town, underlay my claim: Guillermo Tolentino came Sunday afternoons for the service of his soul, and on occasion for the service of his teeth. My uncle Dominador Viola was a sort of deacon in his spiritualist sect; he was also his dentist.

It took just five motoring minutes from Monumento to cross Caloocan’s boundary with my town, and just three more to reach the first jeepney stop—right at the turn into our street. It was in those three minutes that began the unfolding of Malabon, on the straight stretch of asphalt called Letre, whose solitariness provided a sympathetic setting for the funeral that walked a loved one to one of the town’s two graveyards to rest in peace.

Letre itself had nothing to offer for sights. Beyond the gravel shoulders and low embankments and the ditches that served as a watercourse, it was lined on both sides by mangroves grown thick on banks of ponds unseen. You needed to follow the river to see those ponds. Through dikes linked to it, bangus farms filled, refilled  and emptied out at harvest time

Town life ebbed and flowed with the river; all in all it was enriched by it. Fish, whether raised or netted out in the sea, and its byproducts, of which one—patis —itself earned the town wide renown among sauces, were not all the town was about. To raise a paradoxical point: a factory right in our street turned a consistent profit on an entirely non-fishy sauce—soy.

Actually, business was never better, and life never felt better. It must all be in the predisposition of the times. We had just entered the first decade following a brutal wartime occupation. A push toward rehabilitation proceeded purposefully, communally and it became easy

to cultivate a sense of self-sufficiency, contentment and progress from the smallest triumphs.

Food, in any case, was where the prospects proved always good. If food defined the place, as they say it does, our town would come out well defined indeed. One rice-noodle concoction may have alone done it—Pancit Malabon. It was such a sensation it has spawned numerous impostors, every one of them claimed to be “the genuine” or “the one and only” or “the original,” a desecration of an inalienable truth embraced in the phrase “ang tunay.” It may have been precisely because our beloved pancit has suffered so much over-copying and over-appropriating that its quality has become compromised, its originality lost completely.

whereby the community produces for and services itself generally obtained in the entire town, and that’s probably why one was never begrudged one’s better fortune. My father would say, not without a sense of reflected pride and achievement, that our town had more millionaires than any other town—per square kilometer of territory or as a percentage of the population? I don’t recall him saying.

He would also say we had a knack of entrepreneurship “in our blood” and be quick to cite histories of Chinese immigration and some telltale physiognomy—pinched eyes, sallow look. Our own street was named for an illustrious specimen: Gregorio Sanciangco, a Chinese-Filipino of the new rich of the 1890s who, as a member of the Propaganda Movement in Spain, dreamed of an equitable distribution of wealth and opportunity.

Evidently, though, our barrio folk themselves failed to catch a good enough proportion of the endowment— we got more of the looks than the knack; our own family have had to work for wages all our lives.

Malabon’s fated relationship, in any case, is to the river, a force brought in from the sea, brought down upon it, really; the town lies below the level of the sea, held therefore at its mercy. The relationship is made familiar by the sandbanks of Pulo, which lifted and sank with the tide. They never went completely under, though, for us to be deprived our swimming and picnic excursions or alarmed at our geological fate, which, as such things go, works glacially, anyway.

Besieged by water all around, our town could not dam itself in—and hope for some brave boy to throw himself in the hole in case the dam was breached; the sea and its agent river could only be harnessed, made a partner. The network of fish farms did it. Linked to each other and to the river by little dams, it was able to not only manage the tide, but also give itself a bountiful living. As for us boys just beginning to grow into young manhood, we had the time of our lives.

We went clamming and crabbing at low tide and line-fishing anytime anywhere; the milkfish raisers needed not worry—milkfish don’t bite. Neither do mudfish, although they were fair game. My father shot them and I retrieved for him, a happy enough task for which I was yet rewarded—with a shot of my own. Father never missed. Three hits, his minimum for an outing, were more than enough for a family meal, and, at six centavos for every .22 bullet nothing was a better bargain.

I look back on those years—from the mid-’50s through the ’60s—as the springtime of my 20th century.

If it seemed too good to last, it had to do less with natural attrition than with political intervention. After Ferdinand Marcos imposed martial law on Sept. 21, 1972, a vast grid of fishponds was expropriated for low-cost housing at a state-dictated price.

Afraid to be made similar offers or get stuck with an asset spiraling down in value, other fishpond owners switched trades or sold, finding partners or buyers among developers who smelled a profit to be made under the new regime.

Soon, the fishponds filled up with earth that grew structures that housed people that replaced the fish. The tide, with no more watercourses to divert it, rolled onto the streets and, swelled further on rainy days, visited parlors. Since I left in 1972, our own parlor has risen about a meter to catch up to the level of the street. No one is in any danger now of drowning. Just don’t get so happy as to be inspired to jump—not even a little jump—for joy; you could crack your head on a ceiling joist.

I have not visited the old village for some time; no one has died. Funerals still walk, as the weather, gone progressively erratic and extreme, permits.

Letre itself has lost its sympathetic character; once dramatically and suitably solitary, it has become a mere fork in the road, an impassive little tributary of the overcrowded commuter traffic.

Monumento has been crowded in, too. Buildings, train tracks and stations suspended in the air, and billboards have taken away from its reassuring sight. It will never be seen again as I saw it: a life’s landmark.

This has been adapted from a piece of the same title to be published toward the end of the year, along with other place essays by other writers, in a collection illustrated by Manny Baldemor and edited by Linda Panlilio.