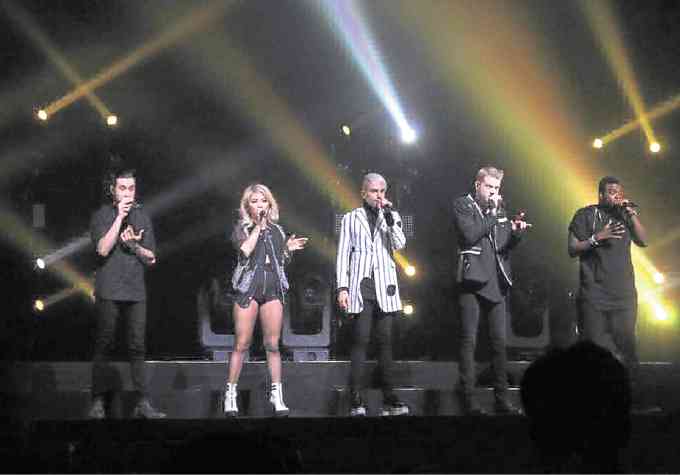 Pentatonix, the Grammy-winning American a cappella group, will be back in Manila for a concert on Sept. 24 at Smart Araneta Coliseum.

Its debut show last year, also held at the Big Dome, was a big hit—prompting concert promoter CCA.Live to bring back the vocal quintet.

For this coming show, expect its repertoire to be different— since the group’s latest self-titled album contains mostly original tracks.

To give you an idea, we looked at the 21-song setlist of a recent Pentatonix concert held Sept. 10 at Vector Arena, Auckland, New Zealand.

The covers include Omi’s “Cheerleader”; Justin Bieber’s “Love Yourself”/”Where Are U Now”; Twenty One Pilots’ “Ride”; Johann Sebastian Bach’s “Prelude from Cello Suite No. 1”; Meghan Trainor’s “No”; Imogen Heap’s “Aha!”; a medley of “Radioactive”/“Say Something”/“Papaoutai” (from its previous albums); “Daft Punk”; and “Evolution of Michael Jackson.”

That should be reason enough for the undecided to buy tickets before they run out.

Speaking of tickets, the Ticketnet box office has started selling seats to the back-to-back concert of American R&B girl groups TLC and SWV on Nov. 6 at Smart Araneta Coliseum.

TLC, originally composed of Tionne “T-Boz” Watkins, Lisa “Left Eye” Lopes and Rozonda “Chili” Thomas, was formed in Atlanta, Georgia, in 1991. Four of its singles went to No. 1 on the Billboard charts, namely: “Creep,” “Waterfalls,” “No Scrubs” and “Unpretty.”

It has also recorded four multiplatinum albums including 1994’s “CrazySexyCool.”

Following the death of Lopes in 2002, Watkins and Thomas carried on as a duo.

Four of its singles—“Weak,” “Right Here/Human Nature,” “I’m So Into You,” and “You’re the One”—became hits.

“Right Here,” which sampled Michael Jackson’s “Human Nature,” went to No. 1 and No. 2 on the Billboard R&B and Hot 100 singles charts, respectively.