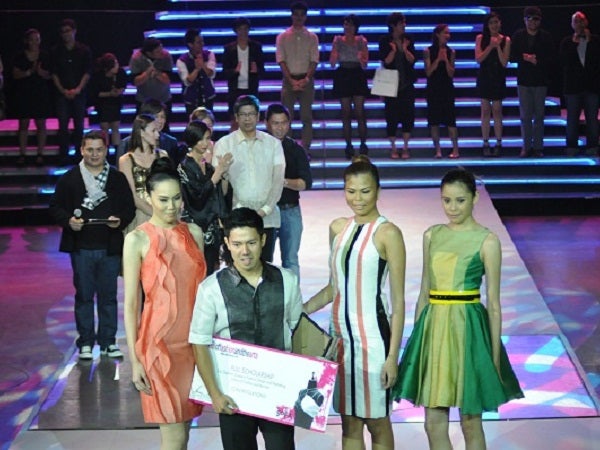 Organized by members of the Fashion Design Council of the Philippines, led by chair JC Buendia, this year’s tilt is dubbed as “Weaving the Future: A Social Design Competition.” Apart from helping Philippine fashion hone and encourage emerging talents, the contest aims to link creativity with social relevance through the use of indigenous raw materials produced by various local communities.

Alzate, a former English teacher in Korea, won in the apparel division for his three-piece collection made of dyed piña-poly (a combination of polyester and piña fibers) in the most luscious shades such as coral and kelly green. He sourced his fabrics from a weaving community in

Alzate’s piece de resistance was a body-hugging white dress made of lined piña-poly and fused with strips of multicolored fabrics, including snakeskin, that were left over from older pieces.

As a whole, his collection had enough chic, stage presence and youth appeal. Judges, led by Josie Natori, Inquirer Lifestyle editor Thelma Sioson San Juan, and Rep. Lucy Torres-Gomez, among others, were probably also impressed by Alzate’s construction, as they had to judge the pieces not only on the ramp, but up close and personal backstage.

Leyesa, who still works fulltime for a government corporation, won in the accessories division. His entry, a garland of a necklace that looked like balls of garlic from afar, was equally attractive and mind-boggling for its workmanship and deft combination of such disparate materials as pearls, Swarovski crystals, miniature chains and small, lightweight balls wrapped in nude chiffon fabric.

Finalists Marian Andrada and Mark Archibal Tamayo received special awards from Smart and Technomarine, respectively. As part of their prizes, the two grand prize winners will receive cash and scholarships from the School of Fashion and the Arts, also one of the event’s major sponsors.