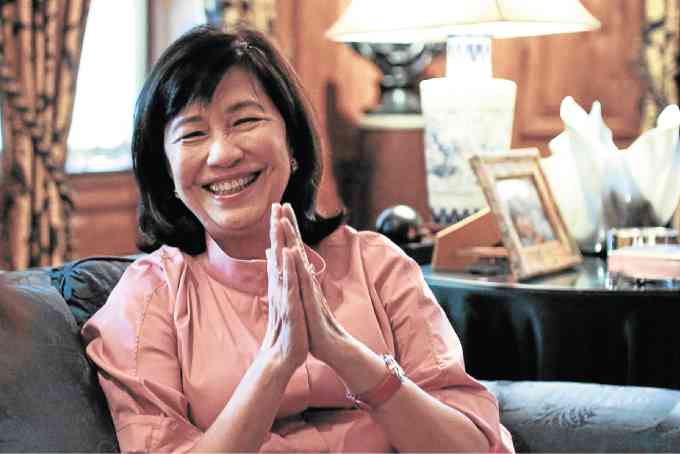 “I REALLY depended on the power of prayer,” said Libet Virata, wearing makeup by Al de Leon of MAC Cosmetics. “It’s trust in God, in what would happen and what’s not meant to happen. It could be great when our prayers are answered, but when they are not, itmeans something else is in store for us.” LEO M. SABANGAN II

ELIZABETH “Libet” Cu-Unjieng Virata would not leave her bed for several days after a routine checkup showed she had Stage 1 breast cancer.

It took a “dressing down” from eldest child Leo who wondered why Mom wouldn’t even get on the treadmill “or do something” instead of moping in bed.

“I was so angry but I was also grateful he came and snapped me out of it. My husband has always been supportive, but my son was more ‘let’s-be-tough-with-her’ maybe because I was tough (with my three children when they were) growing up,” she said with a smile.

That smile wasn’t there one morning in 2006 when Virata was in the hospital with a friend for a routine mammogram. Plans for the day were already laid out. After their separate exams, the two ladies headed out to lunch.

Someone from the medical staff, however, asked that Virata repeat the procedure for a “magnified view.” And then a third take, this time to see her left breast from another angle “to check for something.”

Virata obliged. Mammograms, after all, are one of those medical exams that women ought not to skip. Still, “this is not so good,” she thought, especially since the staff still asked her after the last exam whether Virata was willing to undergo an ultrasound test.

Days later, Virata’s breast doctor confirmed her fears, adding that the lump was “so small” even she could have missed it.

Virata called a close friend who works as an obstetrician-gynecologist in the United States. The next call was to husband Luis “Buboy” Virata who immediately wanted to be with her as she underwent a needle biopsy.

She told her husband to stay put. After all, the biopsy would be finished by the time he arrived. While the doctor collected samples, Virata’s mind was racing. Ten years back, her mother succumbed to peritoneal cancer—a type of ovarian cancer—whose pain she endured for a year before seeing a doctor.

Diagnosed in April 1996, Virata’s mother died three months later. “When we found out, it was already Stage 4.  We barely had time to get used to the idea that she was sick,” Virata said.

Her brother, writer Philip Cu-Unjieng, wrote an article for ICanServe Foundation, the nonprofit advocating breast cancer awareness and early detection, about how their mother “didn’t even have a chance to become a survivor.”

Virata opted for a lumpectomy followed by radiation therapy. The family was with her while she recovered from surgery. Buboy and daughter Nasha were by her side throughout her hospital stay. Elder son Leo waited until youngest child Alonzo went on holiday before they saw Mom.

“We were together most of the time,” Virata said.

After getting back on her feet, Virata asked Cu-Unjieng to introduce her to ICanServe’s members.

“I liked the idea that their focus is on information and early detection. We have one of the highest incidence in the world—highest in Southeast Asia and, at one time, the ninth in the world,” she pointed out.

Early detection is a game changer in battling breast cancer. The disease is easier to beat in its early stage. Trouble is, there are women who decide to see a doctor only when the pain has become unbearable.

Money matters also figure. Surgery and treatment are expensive—a fact that discourages many from seeking medical help in the first place.

Virata’s exposure to ICanServe’s advocacy and projects have made her see first-hand the resilience, inner strength and capacity for love of Filipino women who choose to carry on despite having breast cancer.

For the past four years, Virata has been chair of the foundation’s board, a testament to the members’ recognition of her rugged commitment to empower women.

One thing Virata has observed through the years is how the Filipino woman would always put other people first—be they children, spouse or other relatives. While the concern is admirable, there are many situations where the woman is left with little time or resources for herself, including her health.

Virata also noted that many women appear to be hesitant to subject themselves to mammograms or even self-exams to help detect possibly malignant lumps in the breast.

“We understand if you don’t want to know… That feeling of not wanting to know, (or thinking) maybe it will go away? But you’ll have to deal with it,” she said.

Virata said although not all women would get breast cancer, awareness that it could happen to anyone and that early detection would make a big difference already serves as the first line of defense.

“You’re not serving your family by putting off (a mammogram) that really is a basic need for your own physical health.  Especially single moms or those who have been left by their husbands and are providing for their children. We want to say, ‘come on, let’s find out.’ We feel we’re not just saving the women, we’re saving families,” she explained.

Virata stressed that women should also be made aware that taking care of themselves is not a selfish act. “When the mother disappears from the family, the whole center falls apart.  Or even if it’s a daughter or a sister, so much is lost,” she said.

ICanServe’s network of support spreads from an early detection information campaign to partnering with local government units that agree to provide free or subsidized treatment for constituents with breast cancer.

“Ating Dibdibin,” a program running since 2007, has ICanServe using a grant from the American Cancer Society to partner with cities to teach barangay health workers how to do breast exams.

Virata recalled one incident in which a community health worker who attended a training seminar on self-exams discovered her own lump.

“We understand the fear,” she said. “Almost all of us in the foundation are breast cancer survivors. We know what it’s like to live with that fear. Don’t be afraid because it’s curable.  But you have to find out early so your chances are better.”

On Oct. 13, ICanServe hosts the “Fashion Can Serve” runway event celebrating the works of top designers, their models and muses to bolster awareness and raise support for the foundation’s advocacy at Raffles Makati.

Inquirer Lifestyle witnessed how hands-on Virata is in the project during a high tea get-together among the designers, breast cancer survivors and journalists at Raffles Makati.

Virata said breast cancer has made her more conscious of the everyday: “We wake up everyday yet we only have this day, honestly, but we take it for granted that we have many days before us.”

She added: “I really depended on the power of prayer. It’s trust in God, in what would happen and what’s not meant to happen. We can pray for what we want but we have to be ready (if what comes ahead is) not what we want. It would be great if our prayers are answered, but when they are not, it means something else is in store for us.”

She continued: “As we grow older, we have to learn what they call joyful detachment, which is hard. Let’s not get upset over it. Learn to offer it to God… Sometimes we try so hard, especially women.  We try to do many things, we try to please everybody. I think that’s one of the nice things about getting older.  You learn to say ‘no.’”