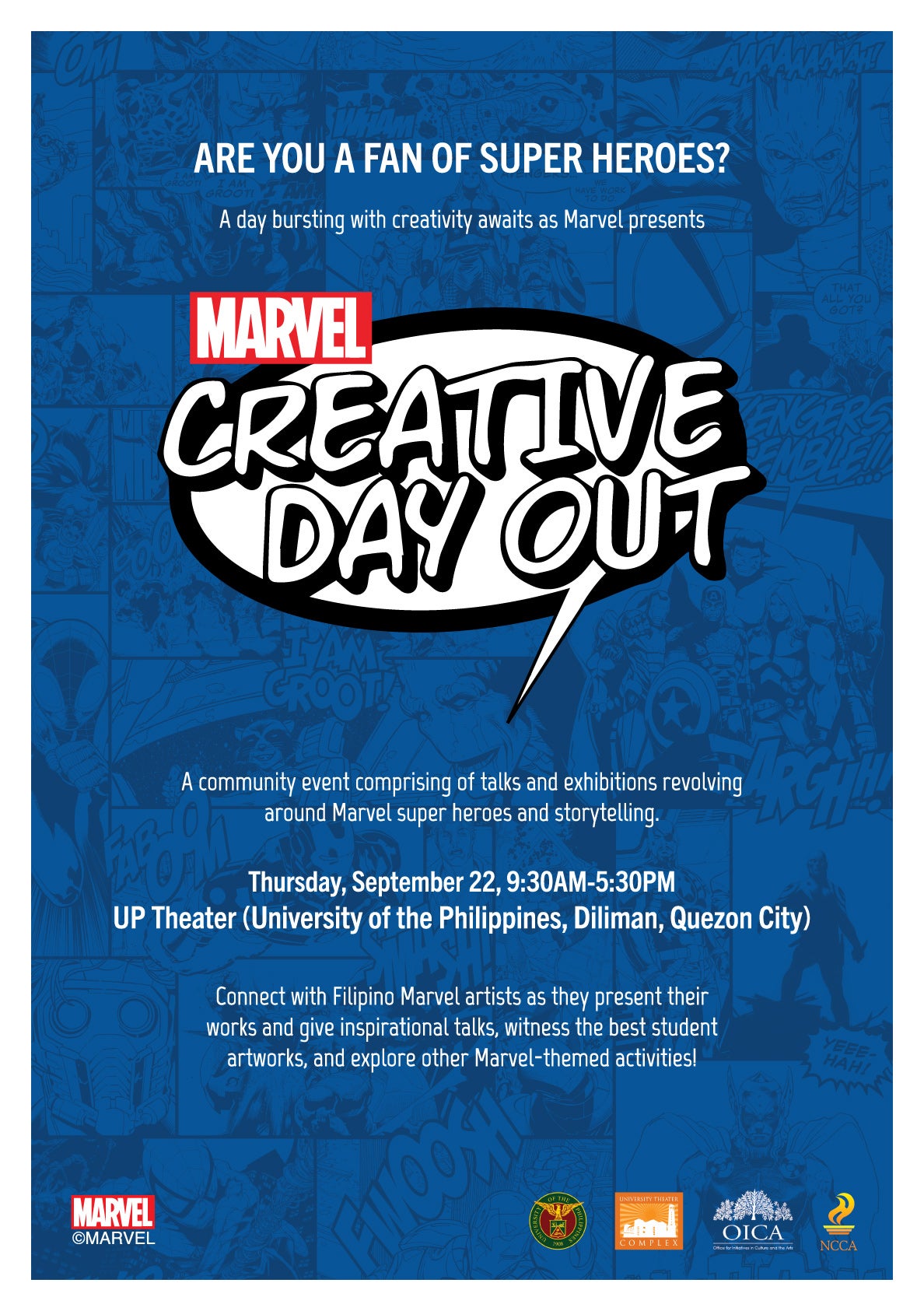 Marvel holds ‘Creative Day Out’ at UP Theater Are you a fan of superheroes?” Marvel asks.

The question is almost rhetorical with everyone enjoying the current blockbuster trend of protagonists in masks and suits. Now’s undoubtedly the time to be a superhero fan, with about 18 superhero films lined up till 2019.

And as Filipino enthusiasts do a countdown till the premier of “Doctor Strange,” the next superhero film scheduled to show this late October, Marvel gives fans a reason to assemble a bit earlier.

In the Marvel Creative Day Out happening on Sept. 22 at the University of the Philippines Diliman Theater, attendees can expect to be blown away by the talent of local artists who have inked their love and passion for the characters and stories from the Marvel universe.

A call for submissions was done prior the event, with numerous fans sending their Marvel-themed artworks for exhibition and consultation (perhaps a little bit of scouting, too) with the creative company’s seasoned artists.

But those who didn’t meet the deadline need not fret, as our friends from Marvel said they still encourage attendees to bring their artworks. A wall at the UP theater was said to be reserved for those who wish to display their multimedia works at the Creative Day Out.

Budding artists could also get firsthand tips from Filipino illustrators Harvey Tolibao, Leinil Yu and Stephen Segovia, who would all take turns in manning the event’s art consultation booth, so don’t forget to prepare your portfolios and sketchbooks!

The three artists, who have all worked with Marvel for a good number of years, are also scheduled to hold individual talks about fine arts, comics storytelling and, of course, Marvel superheroes.

(Super pro-tip: If you’re a fan of a specific superhero and you’re still developing your own style in rendering them, it’s best to ask the professionals who had the experience of drawing these specific characters with the Marvel standard in mind. Bring your works so they can comment on it as well.)

Tolibao’s first project with Marvel was the “Iron Man Annual” in 2007 where he worked as a penciller. His other works with the comics giant include “Silver Surfer,” “Psylocke,” “What If: Civil War,” “Young Avengers: Hulking” and “Ultimate X-Men” with Robert Kirkman.

Yu, who has been a penciller for Marvel in the past 15 years, described his style as “dynamic pseudo realism” in the company’s newsletter called the Daily Bugle (yes, exactly like the publication in “Spider-Man”), has worked on issues of “Avengers,” “Fantastic Four,” and “Ultimate Wolverine vs. Hulk,” among others.

Segovia is best known for breaking into the comic book industry at a young age—he was only 16. He has been with Marvel for six years, producing art for “Dark Wolverine,” “Wolverine Origins,” “Silver Surfer,” and “Ultimates vs. Ultimate Avengers.”

The free event is open to the public and begins at 9:30 a.m.