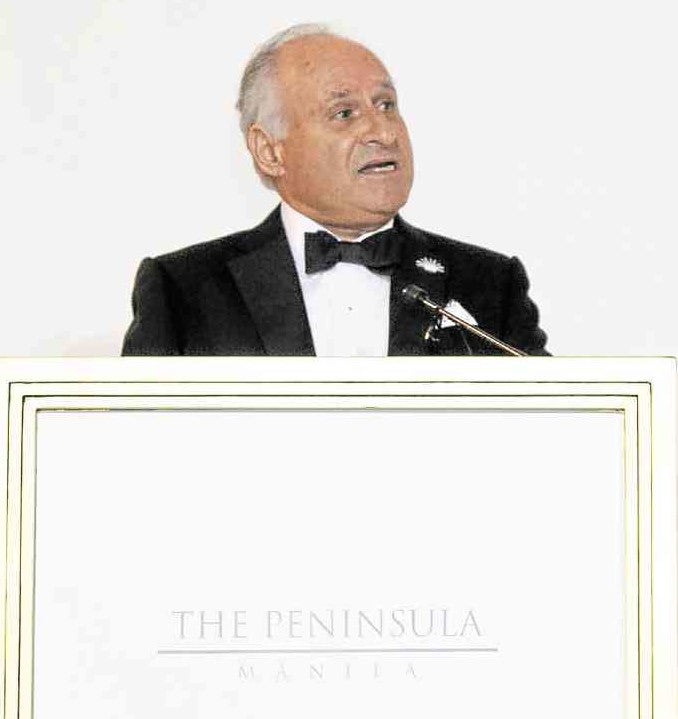 ‘Our hotel has created unforgettable memories’

MAKATI’S “grande dame” of hotels, The Peninsula Manila, marked its 40th anniversary on Sept. 14, in a gala at its historic lobby, attended by the luxury hotel chain’s founding family, the Kadoories of Hong Kong, and over a thousand well-heeled patrons and friends.

“This hotel is very close to my heart, being only the second Hongkong and Shanghai Hotels (HSH) property to bear the Peninsula name,” Sir Michael Kadoorie, HSH chair, said in his welcome address.

“Many of you here tonight will remember Manila in 1976. I can assure you that this city was one of the most exciting and dynamic in Asia at the time,” added the billionaire ranked by Forbes Magazine as Hong Kong’s 10th richest.

Past, present and future

“Our hotel is inextricably linked to the past, present and future of the Philippines and the city of Manila… With its wonderful location at the heart of the Makati district, The Peninsula Manila lobby quickly became the place to see and be seen. Our hotel has created unforgettable memories and witnessed the variety of life in all its drama and excitement.”

The Peninsula Manila was the first overseas property of HSH, following its flagship, The Peninsula Hong Kong, which opened in 1928.

The Manila property was built at the behest of two Filipino taipans, P. L. Lim and his friend Carlos Palanca Jr., who persuaded the Kadoories to consider opening a hotel in Manila, which was set to host the International Monetary Fund-World Bank Conference in 1976. At the time there were only two luxury hotels in the capital.

Kadoorie, in his speech, acknowledged his friendship with the Lims and Palancas—his family’s “great partners and friends… who all share our company’s philosophy and culture.” The hotel opened its doors while his uncle, Sir Horace Kadoorie, was chair of HSH.

Before offering a ceremonial toast, Kadoorie also greeted his wife, Lady Betty Kadoorie, who was celebrating her birthday that evening.

Guests feasted on a generous buffet spread of Maine lobsters, Russian caviar, French cheeses, lechon, champagne and wine, with some groups spilling over to the hotel’s F&B outlets—Salon de Ning, Spices, The Pool—and staying on till the wee hours.

Kadoorie paid homage to seven employees who have been with the Peninsula for 40 years.

“I must thank each and every one of you for your loyalty, warmth, and—as my uncle would have said—your unmatched Filipino charm.”