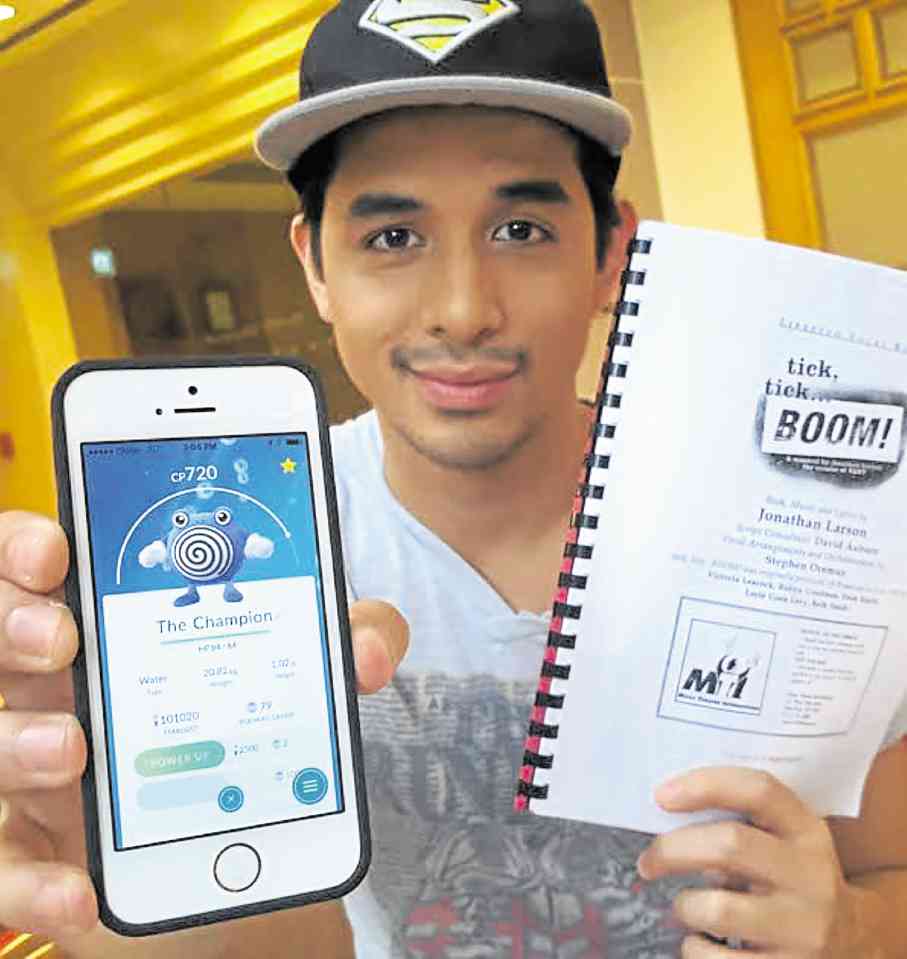 Going barefoot, eating ramen, catching Pokémon–what it takes to get Jef Flores on that stage

“I like rehearsing barefoot,” says Jef Flores. “I like feeling the floor with my toes. It helps me think and keeps me balanced.”

He’s developing the character of Jon in 9 Works Theatrical’s production of “Tick, Tick… Boom!” Jon is a composer doubting his career choice and facing problems with his best friend (who wants Jon to switch to corporate work) and his girlfriend (who doesn’t want to be with a starving artist).

“Tick, Tick… Boom!” was written and composed by Jonathan Larson before he created the now legendary musical “Rent.” The 9 Works Theatrical production is directed by Robbie Guevara with Daniel Bartolome as musical director.

The cast includes Ariel Reonal and Tanya Manalang—fresh from her stint as the lead in Philippine Educational Theater Association’s (Peta) “Rak of Aegis” and, before that, as the alternate Kim in the London revival of “Miss Saigon.”

Flores didn’t need to look too far to craft Jon’s insecurities. “He’s frustrated, lost and about to give up on art. [Earlier in my life] I gave up on theater. I thought that I’d never make it.”

Flores—born in Maryland, United States, to Filipino parents—was a 10-year-old kid who only wanted to play with his Gameboy when his family visited New York.

“My mom took us to a Broadway musical, ‘The Music Man.’ The show was amazing. That was it, I was hooked. In high school, I joined all the musicals and the marching band as well. That’s where my theater career started.”

Later on, a dearth of opportunities made him decide to quit the profession. That is, until he visited family in Manila.

He found out Repertory Philippines was holding auditions for “Disney’s Camp Rock.” “I made the ugliest, most embarrassing resumé in existence and auditioned,” he recalls.

He passed the auditions and made it to the cast. That was five years ago.

He has gone on to act for, among others, Resorts World Manila’s Full House (“Cinderella,” “Priscilla, Queen of the Desert”), Dalanghita Productions (“Kung Paano Ako Naging Leading Lady”), Peta (“3 Stars and A Sun”), Actor’s Actors Inc. (“The Normal Heart”) and Red Turnip Theater (“This Is Our Youth”).

To prepare for shows, Flores takes his script everywhere: “And I read it anywhere. My friends get annoyed with me sometimes, but I don’t like forgetting my lines, so I study as much as I can.”

Hard work pays off. He received the Philstage Gawad Buhay Best Actor nod for his work last year on “This Is Our Youth.”

He also uses exercise to prime his body and mind. He boxes when there are no rehearsals. He plays arcade basketball as a pre-show warm-up.

“I’ll have coffee and shoot basketball at TimeZone. This gets me really focused. Nice deep breaths, don’t panic, just shoot the ball, grab the next ball. It’s just like theater when you think about it,” he says.

Once a show starts its run, Flores will develop rituals. “If I happen to eat ramen on opening night and the show was good, then I’d eat ramen before every show.”

He adds: “My co-actor in ‘This Is Our Youth,’ Nicco Manalo, believes the same thing. On show days, we’d have sushi at the same restaurant, same table, same chairs.”

Also, “I really like to take naps. I can fall asleep anywhere.”

Except when there are Pokémon around: “I have a Poliwhirl with combat power level 720 that I really want to evolve, but I don’t have enough candy yet. So I get really excited when there are Poliwags around [so I can get more candy].”