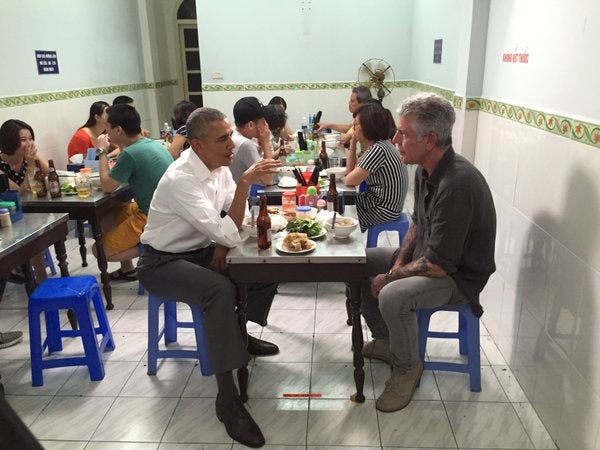 HANOI—They all want to dip their spoon into Obama’s noodle bowl.

Four months after US President Barack Obama plonked down on a plastic stool at Bun Cha Huong Lien for a bowl of Hanoi’s signature pork noodles, the restaurant is cashing in on customers eager to taste what all the fuss is about.

Previously a mainstay among a mostly local customer base, hungry foreigners are now coming in droves to the restaurant dubbed “Obama bun cha” for the Hanoi lunch staple: grilled pork patty and bacon in a sweet broth with rice noodles.

“People come here because they are curious about why Obama chose my restaurant,” said owner Nguyen Thi Lien, who has been running the eatery for 23 years.

Eager to tap the star power of her recent VIP diner, Lien has introduced a $4 “Combo Obama” lunch special of noodles, a side of deep-fried spring rolls and a Hanoi beer—but swears she has kept her prices the same.

“So many have come and we cannot serve them all,” she said at the two-story restaurant, which is now plastered with photos of Obama and his dinner guest, globe-trotting US chef Anthony Bourdain.

The pair stopped by during Obama’s May trip to Vietnam—the third by a sitting president since the end of the Vietnam War in 1975—to film a scene for Bourdain’s CNN show “Parts Unknown” which airs Sunday.

In a teaser for the episode, Bourdain lauded the US leader for his chopstick skills as he expertly scooped up a mouth of noodles during an evening off from his diplomatic duties.

“This is killer, this is outstanding,” he said.

The pork pit stop has seen the number of customers double, according to Lien, and the restaurant appears set to become a fixture on Hanoi’s tourist trail.

“I saw that Obama had been here, saw that Anthony Bourdain had been here, and I generally follow their advice, figured they’d have good taste, came here and found it to be true,” American tourist Andrew Lala told AFP. TVJ