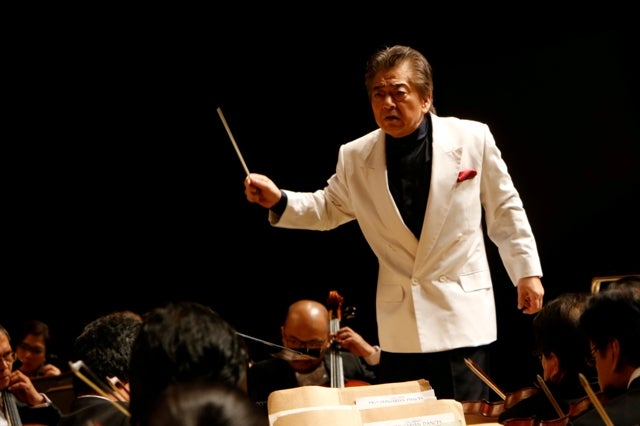 Forging a powerful a tandem with fellow Japanese performing artist, the violinist Ryu Goto, Fukumura auspiciously kicked off the PPO’s opening concert at Cultural Center of the Philippines Main Theater, a feat that electrified the audience.

The program followed the basic symphonic format consisting of an overture, a concerto and a symphonic work, following Fukumura’s philosophy of “going back to the basic,” the course of action that the PPO will pursue under his stewardship. In an interview, he articulated this stance, which simply meant going back to the classical repertoire to hone the PPO’s potential to reach greater heights.

Indeed, the PPO was in top form. The silken symphonic sound it produced enraptured the audience

One marveled at the effervescent sound the PPO produced. At once the conductor had asserted his authority. On the podium, he cut a magnetic presence. His right hand marked the tempo, and the left hand actively cued the musicians. The listening experience was enhanced as the articulate gestures of his conducting marked the ebb and flow of the music, with appropriate dynamics and coloring.

The ensemble work was forged with such marvelous dynamism that disclosed a velvety symphonic texture. There was no mistaking the fact that the musicians were truly inspired and collectively played with gusto.

In Tchaikovsky’s “Violin Concerto,” the PPO forged a debonair collaboration with the featured Japanese violinist, Ryu Goto, whose dashing youthful looks ensured a magnetic presence on stage. Goto played the concerto with an impressive dispatch even though the concerto was considered unplayable a long time ago.

He never rushed his playing. He sang the lines in a legate manner with understated elegance. Of course, the world-class instrument, the Stradivarius 1722 that he used, on loan to him by the Nippon Music Foundation, was a big factor in his awesome rendition.

The youthful violinist had to acknowledge several curtain calls punctuated with crisp shouts of “bravi.” The audience savored more such elegance, such enticing singing tones in the encored Massenet’s “Meditation from Thais,” that he rendered sans accompaniment. Thunderously applauded, the violinist gave another encore, this time the first movement of Eugene Esaye’s “Sonata No. 2” that displayed awesome Bachian virtuosity.

As in the overture, maestro Fukumura conducted the orchestra sans score in Beethoven’s “Symphony No. 1.” As in the previous works, he was, needless to say, in solid command. He surged through the four-movement work with astounding meticulousness for details. Under his baton, the musicians eloquently played and developed the symphonic idea behind the work with flying colors that, indeed, made listening all the more pleasurable.

The maestro, of course, is not a stranger to the PPO. He had guest conducted it before his incumbency as its principal conductor. In the interview, he complimented the PPO musicians desire for learning, saying they are “very talented.” His task he said is to bring such a talent to “blossom to the full.”

He made several curtain calls at the end that quieted only when he encored the familiar “Hungarian Dance No. 5” to the enjoyment of the audience.

With maestro Fukumura as its conductor, watching the PPO in its concert series this season will become an irresistible habit. For sure, the PPO will surge to greater heights of glory.