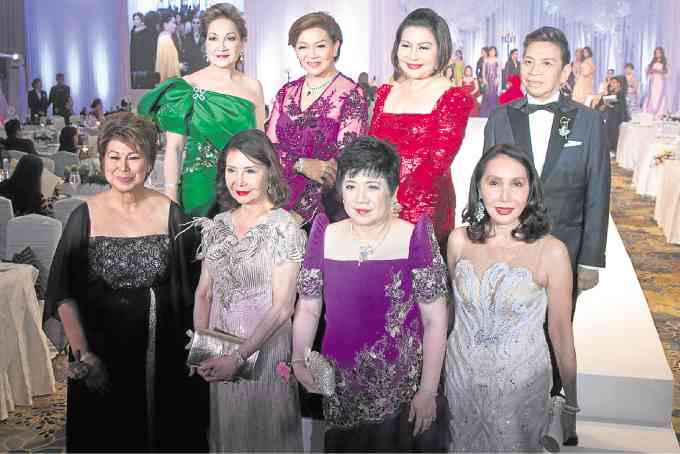 Is there a rivalry between the Philippine Cancer Society Inc.’s (PCSI) annual Best Dressed Women of the Philippines and ex-politician Margarita “Tingting” Cojuangco’s  “Elegant Filipinas”?

When “Elegant Filipinas”  announced its event on Sept. 26, 2015, it coincided with the PCSI’s Best Dressed Women of the Philippines gala

Somebody called up Manila Diamond Hotel, Cojuangco’s sponsor, asking if the “Elegant Filipinas” could be moved to another date.

For the second time, Cojuangco held her “Elegant Filipinas” event on the same night as the annual Best Dressed Women of the Philippines/Men of Influence.

People can’t help but compare the David and Goliath dynamics. The PCSI’s Best Dressed Women of the Philippines has grown since its inception in 2004.

It is a fundraising event to aid underprivileged cancer patients at the Philippine General Hospital. The women are selected more for their accomplishments and community service. The Men of Influence are business leaders who adopt a patient and pay for their chemotherapy. The donations to the PCSI are tax deductible.

At the Makati Shangri-La, PCSI chair  Dr. Roberto Paterno reported that PCSI has raised P70 million—mostly from ticket sales of the Best Dressed and

Asked why “Elegant Filipinas” and “Best Dressed Women of the Philippines” seem to be on a face-off, Cojuangco replied that it’s purely coincidence.

PCSI has been holding the Best Dressed gala every third week of September to coincide with the birthday week of the  late Imelda Cojuangco, one of its biggest benefactors.

“I don’t know why the stars have put us together,” she said.  For its premier event, she said the only date its sponsor hotel could provide was Sept. 26, 2015.

To gain momentum from last year, Cojuangco decided to hold it again this September. However, the ballroom’s availability coincided with dinner of the PCSI. Both events were held on Sept. 22.

“I wanted September, simple,” she said. “After October, people will be thinking about Christmas. I didn’t know the Best Dressed event existed. On finding out, I surely missed the old Manila’s 400 and style arbiter Tita Conching Sunico,” she explained.

The “Elegant Filipina” served as a reminder to society of refinement and appropriate style.

“Women may have expensive clothes but they may not be elegant or have the figures to carry them. Elegance is about being consistent in all aspects,” she explained.

The first beneficiaries were women weavers and sewers in Kabayan, Benguet Province, and dressmakers in Tanauan, Leyte, who would be trained by  Tesda. For its first foray, the event raised funds amounting to six figures from sponsorship.

This year, the beneficiaries are the wives of the SAF 44, some of whom were her students at the National Defense College of the Philippines.

Cojuangco flew in five widows for the event. The fund will be donated to their kitty.

Cojuangco revealed that she is writing a book on the Special Action Forces, which includes details of their last phone calls to their wives.

Meanwhile, Helen Ong, who spearheads the Best Dressed Women of the Philippines gala, shrugged off the competition. She has been single-mindedly focusing on raising money to help sick patients and makes personal donations to PCSI.

With Cojuangco, she doesn’t see any competition. “The crowds are different, ” she said.

While both events had their share of the diplomatic corps, the PCSI had a crowd from the affluent Filipino-Chinese community. Marge C. Enriquez