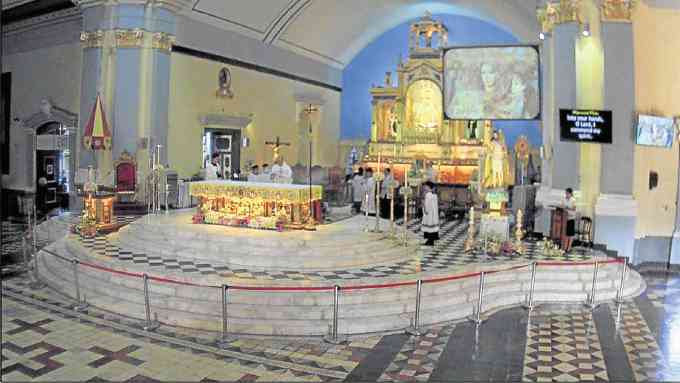 NOVENAMasses have started at the BasilicaMinore ofOur Lady of Manaoag in the run-up to her feast on Oct. 2.

The Feast of San Lorenzo Ruiz de Manila and Companion Martyrs will be celebrated by the Catholic Church Sept. 28.

Ruiz was a scribe and member of a rosary confraternity in Binondo in the 17th century. He left Manila to escape trumped-up charges against him along with Dominican missionaries and a Japanese Catholic layman with leprosy. They landed in Nagasaki where the Tokugawa Shogunate was persecuting Christians.

Ruiz along with his companions refused to renounce Christianity, with the Filipino boldly saying he would offer a thousand deaths for Christ. They were tortured and put to death.

In 1981, Pope—now Saint—John Paul II beatified Lorenzo Ruiz and Companion Martyrs in Manila, the first beatification ceremony outside of Europe in history. In 1987, they were canonized.

San Lorenzo Ruiz is the patron saint of overseas Filipino workers and of migrants in general.

Novena Masses are being held every day, 5:30 p.m., at the San Lorenzo Ruiz Parish Church in Dagat-dagatan since Sept. 16. The church will celebrate the saint’s fiesta today.

At least 108 candidates were given the sacrament of confirmation yesterday.

Last night, there was a Parish Family Night during which at least 36 candidates received the sacrament of matrimony.

Grand procession will be at 5 p.m.

Dagat-dagatan church is under the ministry of the Dominicans.

The Feast of Our Lady of the Holy Rosary will be celebrated at the Basilica Minore of Manaoag in Pangasinan this month. Daily Novena Masses to the miraculous image of Our Lady of Manaoag started Sept. 23 and will continue till Oct. 1

Fiesta Mass will be on Oct. 2. It is expected to be presided by Archbishop Socrates Villegas.

Green Faith Travels is holding a pilgrimage to the Jubilee of Mercy churches in the Archdiocese of Lingayen-Dagupan, including Manaoag and the province’s oldest church, for the group’s fifth Marian Pilgrimage in Pangasinan, the Co-Cathedral of the Epiphany of Our Lord Parish in Lingayen, on Oct. 22.

The San Isidro Labrador Parish Church in Silang, Cavite, will hold a memorial for the victims of Typhoon “Ondoy” in 2009 on Sept. 26, the seventh anniversary of the deadly flooding.

According to Carmelite Fr. Gilbert S. Billena, parish priest, there will be a memorial for the victims at 8 a.m., a procession, and a Mass at 9 a.m. The parish office for disaster preparedness will likewise be blessed and inaugurated on the same day.

Bacacay in the Diocese of Legazpi in Albay recently celebrated the Year of Thanksgiving for the gift of a hundredfold of priestly vocations.

As the townspeople of Bacacay celebrated the feast of St. Rose of Lima Aug. 29-31, they also offered thanksgiving for the  high number of vocations in the town.

Bacacay is said to be the cradle of priestly vocation in the region with 101 priests and three deacons from their town, including Radio Veritas vice president Fr. Roy Bellen and Catholic Media Network president Fr. Paulo Barandon, as well as two retired bishops of Legazpi—Bishop Emeritus Lucilo Quiambao and Bishop Emeritus Jose Sorra, who both stay at Bethlehem Retreat House in Sogod, Bacacay.

The town of Bacacay in Albay was a mission area or “Visita” of the Franciscan friars who were based at the parish of Tabaco City, which was then also a “Visita” of the parish of Camalig, Albay, until 1616. Bacacay eventually became a parish in 1660. St. Rose of Lima was canonized later by Pope Clement in 1671 and thereafter became patron saint of Bacacay.

To mark the 800th anniversary celebration of the Order of Preachers, Santo Domingo Church in Quezon City is holding every Wednesday, 5:30 p.m., the perpetual novena to Saint Dominic de Guzman, founder of the Dominican Order.