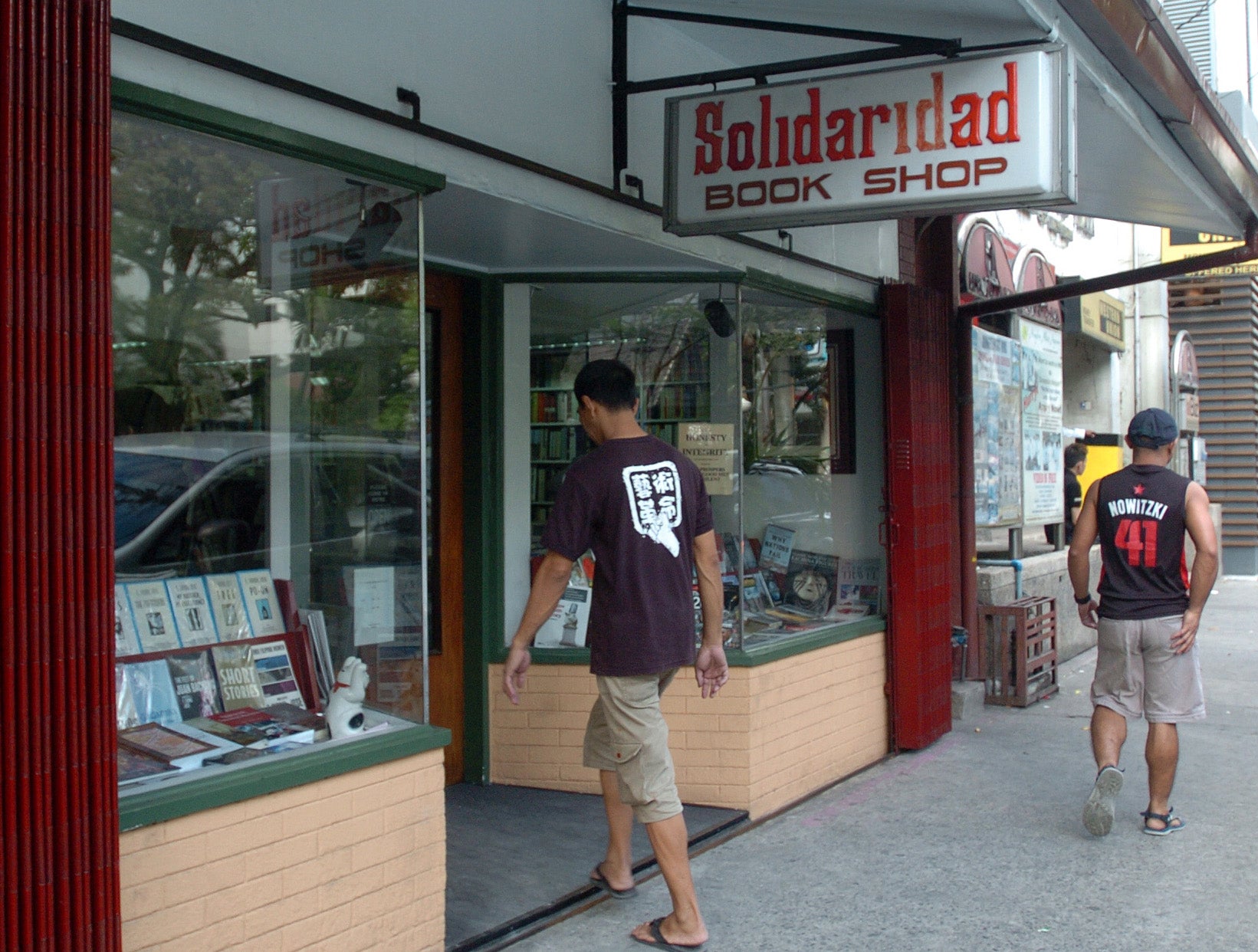 THE PLACE to visit for hard- to-find and limited-edition titles, and the widest selection of Filipino books anywhere INQUIRER PHOTO

The little shop of honors

Republic Act No. 10066 (or the 2009 National Cultural Heritage Act), created in response to the demolition of the Manila Jai Alai Building in 2000, aims to preserve structures of significant cultural importance and historic buildings over 50 years old. In both cases, Solidaridad Bookshop can already pass as an institution.

“During the Liberation, all buildings in this area were burned down,” recalls José, who will turn 92 in December. “This was built in 1946, right after the war. It was owned by my in-laws.”

Unlike many heritage structures with elaborate designs that we’re used to, the building has a simple architectural layout. It is primarily functional with a no-nonsense aesthetic, an upgraded version of the typical American-period accesoria. It is one of the few postwar row houses remaining in the Ermita-Malate area.

On the ground floor is the bookshop that has become famous throughout Asia for its variety of A-list books both classic and contemporary—some hard-to-find and limited-edition titles, many by Asian writers, and probably the widest selection of Filipiniana in the country.

“We have more Filipino books than all other bookstores in the country,” asserts José.

He says their pricing is competitive although some titles are a few pesos higher than those in big bookstores. “Ay naku! If we didn’t own the building, we would have closed down long ago.”

The second level, which would be the entresuelo or mezzanine of the traditional bahay-na-bato, is the office.

The third level, which would be the loft in Western houses, is the family space with an antechamber. This reception area, with a narra round table and a Julie Lluch terra-cotta bust of José pedestaled on a corner, is occasionally turned into a social hall or conference room that’s now historic for the prominent political and literary personages that had congregated around its table.

It was here one afternoon in late 1983 where we first met José along with fellow National Artist Nick Joaquin and University of the Philippines president and essayist Salvador P. Lopez. With dramatic flourishes in his stentorian voice while gulping San Miguel Pilsen, Joaquin was then telling us his memories of Christmas during the war.

The bookstore was named after the Propaganda Movement organization and its namesake biweekly newspaper, which was at one time edited by José’s idol, national hero José Rizal. The year it opened, the Philippine Center of International PEN (Poets, Essayists, Novelists), which José founded in 1957, made the place its headquarters.

José talks fondly of those sessions of boozing and loud argument with Joaquin. “We agreed on two things—‘Don Quixote’ and Rizal. We disagreed on [James Joyce’s] ‘Ulysses’ and [José Garcia] Villa.”

“Even the crown princess of Thailand came here, during martial law,” says José. “[President Ferdinand] Marcos sent his men to get books here, like [Tourism Secretary José] Aspiras. At this table, Ninoy expounded on revolution. Ninoy was a very receptive reader. Marcos was the most brilliant president we’ve ever had.”

Solidaridad had become such a hotbed of political discourse that it was bugged during martial law, José reveals. Several writers who had frequented the place were imprisoned by Marcos.

A curious story is the 16 ghosts inhabiting the building, which José relates in full detail though rather dismissively.

“Most of the houses here are haunted,” he says. “One that usually appears in the building is chinita, a girl with pigtails wearing a red blouse and a black skirt. She’s maganda, but not ravishing; naughty, but not malevolent. Nasanay na kami sa mamaw na ’yan, e. If Nick Joaquin were here, he would tell you. He experienced it four times.”

Apparently Joaquin felt the ghostly presence once in the flushing of the toilet bowl, at another time vinyl records crashing down the floor, with no one there.

In the ’70s, a big fire hit the area. Solidaridad’s top floor was burned.

Extensive renovations, alterations or modifications of the original structure may diminish the building’s architectural-heritage value; still, Solidaridad Bookshop can certainly be declared a cultural or historical site.

And that word-of-mouth reputation as “the best little bookstore in Asia” it will truly deserve.