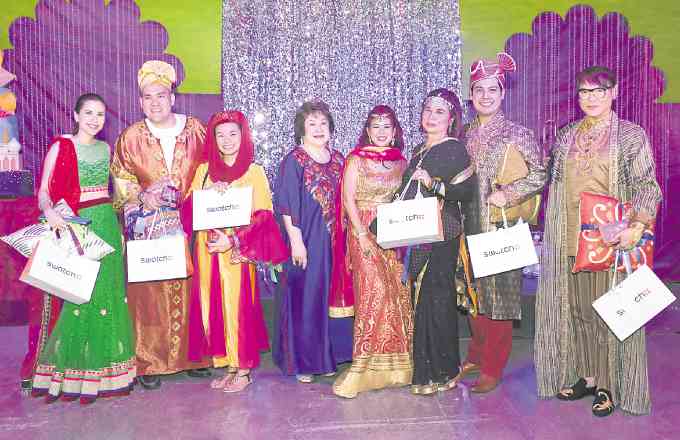 The Grand dame of Makati hotels, Peninsula Manila, marked four decades as one of the legends of Philippine hospitality with one of the grandest gala events our city has seen. Although there have been several events to mark the milestone, Sept. 14 was the exact date when the Pen opened her doors 40 years ago. And so it was perfect that the 14th was the night of a gorgeous party that lasted into the wee hours of the 15th.

Headlining the party was acclaimed musical artist Lea Salonga, who sang a few numbers to set the mood. The Lobby was festooned with shimmering, custom-made capiz chandeliers cascading downwards. A touch of nostalgia was provided by the original Las Guitaras troupe, which performed every night in the early years of the hotel.

Still in my Indian fashion mode, I arrived at the hotel wearing one of my Indian saris, accompanied by my hubby Dennis Valdes. I recalled how we first met in the Lobby over two decades ago.

But this was no time for nostalgia, as the champagne was overflowing and the party gearing up. We gravitated to the buffet tables, groaning under the weight of Maine lobsters, Russian caviar, French cheeses, Philippine artisanal chocolates, lechon, Atlantic turbot, among many others. With so many guests, the party extended all the way to Salon de Ning, Spices and the Pool.

In his welcome speech, GM Mark Choon remarked that they were looking forward to sharing Peninsula memories, as well as creating new ones with everyone that evening.

Sir Michael Kadoorie, chair of the Hong Kong and Shanghai Hotels which owns Peninsula, flew in from Hong Kong to grace the evening’s festivities. In a heartfelt speech, he traced the history of the hotel, recounting how they were very thrilled when they opened in the Philippines, being the group’s second hotel following their flagship property overlooking Hong Kong harbor.

Sir Michael clearly keeps Pen Manila close to his heart. He singled out several loyal members of the team, many who had been with the Pen since Day One. He also noted how the Lobby remains the place to see and be seen, and truly the evening was a testament to that.

As we wandered around the hotel, we chanced on Sonja Vodusek, GM of Peninsula Tokyo and former GM of Manila, enjoying a quiet repast in a corner of Old Manila along with Swatch grand dame Virgie Ramos, BenCab, Annie Sarthou, Susan Joven and Sandy Uy.

“Tita” Virgie graciously offered to host my post-birthday party at the Swatch & Swatch Building on Arnaiz Street in Makati City. And so, two days after, we held the Bollywood-theme party complete with bindis, henna tattoos, Indian drums and Indian food from Kashmir Restaurant.

Guests with the best Indian costumes were awarded with Swatch SISTEM51 watches. This mechanical revolution timepiece is the first Swatch that’s a fully automated mechanical watch, which has 17 pending patents of groundbreaking technology.

Its precision and timekeeping has only 51 parts and an astonishing 90-hour power reserve. It has one central screw uniting the mechanics.

The new SISTEM51 Irony is the automatic watch for those who value clean, classic design, blended with contemporary Swatch style.

Swatch SISTEM51 Irony watches were also given to newlyweds Nannette de Leon and Kowboy Santos. After 18 years of togetherness, the two finally tied the knot and now celebrate life officially as a couple. That evening, my Indian dance choreographer Reshy Budhrani became an instant Indian wedding vow host as she guided the couple through some ceremonial vows of love in an Indian-style ceremony.

Amazingly grand and colorful birthday cakes from Hearts & Bells, Goldilocks and Penk Ching delighted all the guests who enjoyed the cupcakes from Cupcakes by Sonja as well. The husbands enjoyed the drinks provided by Manille Liqueur, Botanist Gin and Remy Martin Cognac. Giveaways from Bench, Zen Zest and Heliocare completed the evening.

This year, the eggs worked perfectly as some 150 golfers enjoyed sunny weather at the 18th Assumption Alumnae Association Golf Tournament at the renowned Sta. Elena Golf Club in Cabuyao, Laguna.

Dubbed “Golfing for Gold,” this year’s fundraiser was in support of the forthcoming AAA Golden Jubilee Year, whose hallmark projects include professorial chairs, scholarships, green projects and medical missions.

The tournament raised funds for a school building in Villa Maria Integrated School of indigenous Aeta students in Porac, Pampanga.