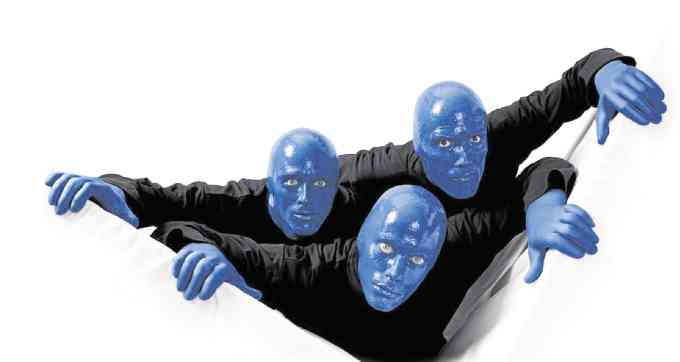 The worldwide phenomenon known as Blue Man Group, in partnership with the Philippines’ #1 mobile brand Globe Telecom, has successfully brought their comedy, theatre, rock concert and dance party into our shores, much to the delight of Manila audiences, Blue Man Group opened on Thursday last week, Sept. 14, to a full house, rave reviews and standing ovations, and the show continued to astound Filipinos night after night since then.

Now the Blue Man Group ends their exhilarating Manila season this Sunday, September 25. Tickets are still on sale for the final shows.

Comprised of three bald and blue performers, Blue Man Group is well-known for their unique brand of techno color entertainment. Blue Man Group 2016 World Tour has already made its stops in Singapore, Macau, and finally they’ve made an indelible blue mark on Manila.

The Blue Man name was chosen to evoke the word Human and is all about the colorful celebration of life.

Phil Stanton, co-founder of Blue Man Group, recalls how it all started: “We were three very close friends interested in finding our own voice through performance while exploring our various interests such as music, comedy, performance and fine art, as well as pop culture”. That was 25 years ago.

“We were living in a time of emerging digital technologies that had the potential to greatly bring people around the world closer, but also had the potential to alienate, and it seemed to beg the question: “What is essentially human?” Though we were not necessarily conscious of it at the time, we landed on three main areas: that people have the need to explore their own individual creativity through life; they need to continue to be curious; and that they need to feel part of a community,” he shares.

The performance that centered on the curious, innocent, Blue Man character turned out to be a groundbreaking performance that left audiences awed.  To date, they’ve played to over 35 million people across more than 20 countries and even have permanent shows in Las Vegas, New York, Orlando, Boston, Chicago and Berlin.

Other interesting numbers to digest – during one week of performances the Blue Man relies on 32 pounds of Jell-O, eight boxes of Cap’n Crunch cereal, 96 pieces of white chocolate Toblerone, 240 marshmallows and 40 boxes of Twinkie Lights (don’t worry — each Twinkie has just 130 calories!).

Whether eaten or used in the show, that is for you to find out at the Blue Man Group 2016 World Tour now on in Manila until September 25.

The creative collective has become part of the pop culture zeitgeist with a “Megastar World Tour”, a rock concert parody hitting 100 US cities and ten countries, and two million fans. The group boasts five music albums, collaborations on film scores and performances with prestigious orchestras as well.

Despite the absence of spoken dialogue, the Blue Man Group keeps audiences mesmerized during its show with a fully immersive audio-visual experience complete with electrifying music, state-of-the-art technology, an enthralling live band and its signature interactive, audience experiences.

When asked what he considers the group’s best show yet, Stanton says: “Our best show is the one audiences will see right here in Manila. We are continually honing our brand of stagecraft to finding the best expression of that original voice. The show they will see incorporates all we have learned, and represents our most up-to-date show in terms of the character’s unique fresh take on the way we all live today,” he enthuses.

It is brought to Manila by Blue Man Productions Ltd, Lunchbox Theatrical Productions Ltd and Concertus Manila. In partnership with the Philippines’ #1 mobile brand Globe Telecom. Special thanks to Mind Museum.