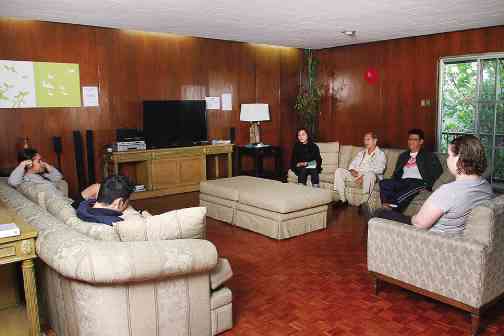 UNDER a focal counselor, the client’s program is adapted to suit one’s recovery. NELSON MATAWARAN

At this cozy rehab center, they fight addiction with positivity

AS THE sun sets on the ridge in Baguio, Robin, a 27-year-old balikbayan from Canada, sits in the living room of a mid-century house, keeping track of the daily death count of President Duterte’s war on drugs.

He identifies with the stories of the drug underworld—the shady deals, the link between drugs, alcohol and gambling, the desperation and isolation.

“You have a choice,” says Robin, who has been recovering at Kaya, a high-end addiction treatment center that espouses a humane approach. In the past few months, he’s been enjoying wholesome food, the quiet life in the City of Pines, meaningful conversations with Kaya’s counselors and other clients, regular excursions to museums and other destinations, and moments of reflection.

Robin has softened up: “I saw the true Robin—sweet and loving to the family. Despite my sins, my family gave me love and understanding.”

Other rehab centers take a punitive approach to users, while public hospitals will lock them up in cells with other psychiatric patients.

In contrast, Kaya adopts the approach of Dara, a luxury rehab in Thailand, which uses cognitive behavioral therapy. This method looks into the thinking and behavioral patterns that have created one’s negative cycles and how to break them. Under a focal counselor, the client’s program is continually adapted to suit one’s recovery.

Kaya was established by its executive director Robert Labos and Leila Alvarez-Ramos, a financial consultant. Labos is a former client and counselor of Dara. He met Ramos while working at another rehab center in Baguio, where Ramos’ brother-in-law was a client.

Because of the stigma of substance abuse, Kaya had to change residences since it opened in 2015. It opened at scenic Camp John Hay, then moved to the Oppen House due to pressure from neighbors. Its present location at a nine-room home in Leonard Wood is comfortable, but needs a facelift.

Labos and Ramos are still looking for a more attractive facility whose neighbors wouldn’t mind a treatment center in their midst.

Nonetheless, Ramos, with her background in running the Casa Vallejo hotel, has managed to make the place homey. She ordered good linens for the bedrooms, trained the housekeeping staff and hired a seasoned house manager.

Kaya’s clinical manager and psychologist, Dr. Geraldine Llanes-Leaño, explains that aside from cognitive behavioral therapy, Kaya’s method consists of motivational interviewing, or positively coaching the client to sort out issues  and reduce the impact of substance abuse. The program also relies on the Alcoholic Anonymous (AA) 12-step program, where participants detach themselves from drugs and booze, own up to their powerlessness over these substances, and depend on God instead.

“We want them to discover their potential for healing,” says Leaño. “They learn to unravel the threads that bound them to reveal their inner power. Clients speak openly without fear of being judged during therapy sessions. This allows them to understand their emotions and what drives them. In other places, the patients tend to be guarded in what they say. That doesn’t help them process their thoughts and feelings.”

The psychologist adds that other centers apply the “flooding” therapy of exposing the patient to constant verbal bombardments on the negative behavior that drove them to addiction. “This may help for some, but there is no absolutely perfect remedy. Kaya believes that clients can accomplish a task, receive positive affirmation and gain self-confidence.”

Then again, the road to recovery is not without challenges. “In the first week, the client wears a mask, which takes time to take off,” says focal counselor Vicente Macasaet.

He also deals with chronic relapsers, clients who are caught in a cycle of sobriety, and then a return to abuse. With patience, he’s able to rein them in.

Macasaet observes that the main issues of addiction for many clients stem from long-held misconceptions about the self since childhood, damaged by a cold or dysfunctional family and peer pressure.

Substance abuse is the addict or alcoholic’s coping mechanism that eventually turns into self-destructive behavior.

As a counselor, Macasaet assists his client in getting to the core of their problems before they can come out of their addiction.

Specializing in family counseling, he understands the parents’ difficulties in the most personal way. Macasaet has had a family history of drug dependents and alcoholics, including a brother-in-law who metamorphosed into a counselor for society patients.

The sessions can be painful when members raise past issues that further weaken worn-out ties, or behaviors that enable the user to further self-destruct. He manages to detach himself and ultimately pull the family out of their pain and gain some closure.

Stories from the younger clients are more hopeful.

Grace (not her real name) started using drugs out of curiosity and rebellion. Working in a call center, she fell in love with her boss, a functional junkie. She broke off after a decade and then met her current boyfriend at Narcotics Anonymous. They were sober until her boyfriend had a relapse, fought with his parents and was fired from his job.

When Grace got sick, she also lost her job and became penniless. For one year, the couple roamed around the metropolis and slept in funeral homes, pretending to attend wakes, or outside convenience stores. They took a bath in a Quezon City home which offered free bathrooms to the homeless and joined the weekend soup line.

In malls, Grace spritzed perfume samples and applied makeup from testers to look decent when begging for money. If they earned enough, the couple could pay for a cheap room for the night.

Grace’s mother sought Labos’ help to find her daughter and put her in Kaya. Grace received the message through social media. “It was like a gift,” she recalls. “The program focuses on your needs to get the maximum benefits. I believe I’m equipped to handle situations because I have a better understanding of myself.”

A graduate of the program, Dennis Espiritu, 38, has set an example of recovery after a long history of chronic relapses, the trauma of family breakdown and the deaths of his parents. He was stuck in a cycle of drugs, alcohol, gambling, womanizing and mismanaging his earnings from a call center. Once, his supplier set him up for arrest, which Espiritu calls “huli-dap.”

His mother, who was suffering from breast cancer, had to sell the car to bail him out. She responded with tough love, which, in most cases, fails. The demand for an immediate end to substance abuse further damages the fragile relationship.

A chronic relapser, he enrolled in various rehab centers and a halfway house. Espiritu recalls that in one community, he cleaned the house, and joined praise community singing and group therapy. However, the program was also stern. When he misbehaved, he got a haircut, stood in a circle and was flooded with insults.

“I vowed never to return. I went back to drugs,” he says.

In Kaya, Espiritu feels safer, being away from Metro Manila and starting a new life. He is an actor with community theater who attracts the crowd with his strong stage presence. In Kaya, he’s the buddy who assists the counselors.

“Unlike other centers where they shout to give negative feedback about you, here you are treated with respect and love. They don’t dictate to me what to do. I’m with people I can talk to freely, and who offer suggestions, unlike in other centers. In the end, I’ve come to realize that recovery is handling life on its terms,” he says.