How safe is your food? | Inquirer Lifestyle ❮ ❯ 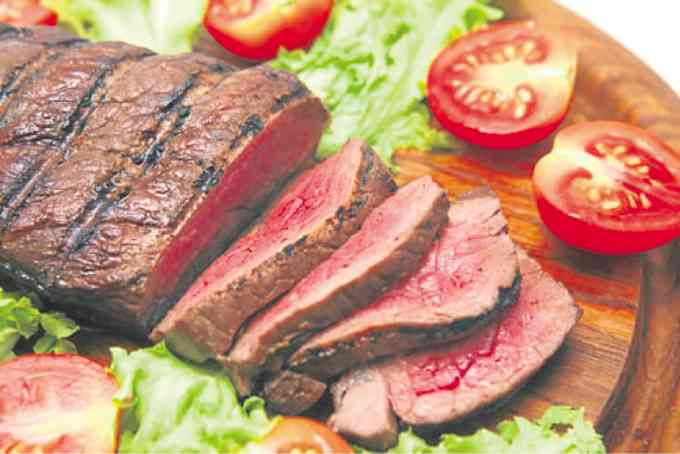 Eating too much red meat is believed to cause cancer.

How safe is your food?

THE INCIDENCE of cancer among Filipinos has become so common today, that it’s no longer unusual for one to have a family member, a relative or a friend to be afflicted with the dreaded disease and its various forms.

There are many cancer cases whose causes cannot be directly traced. But it’s possible that these come from the food that we eat.

“It’s a problem that affects everybody; you would not like to eat something that would make you sick,” said Dr. Modesto Chua, scientist and director of the Philippine Institute of Pure and Applied Chemistry (Pipac).

Dr. Chua spoke to Inquirer Lifestyle at the sidelines of “Symposium on Food Safety: Regulations and Food Contaminant Testing,” a two-day event held recently at the Pipac building inside the Ateneo de Manila University campus in Quezon City.

The symposium featured lectures and presentations by representatives from the Philippine Food and Drug (FDA) Center for Food Regulation and Research; Product Safety Inspection Center, Japan; Eurofins Scientific in Vietnam; Shimadzu Philippines Corp., a subsidiary of a scientific and medical equipment company in Japan, among others.

“It’s our first time to do the symposium. We decided to hold it because of the topic. Food safety is a very critical issue,” said Dr. Chua, who in 1972 founded Pipac—an independent, non-profit research and testing institute—after obtaining a grant from the Germany-based Alexander von Humboldt Foundation.

He recalled that some 20 years ago, Philippine prawn exports to Japan were at their peak, but suddenly wavered when Japanese importers discovered the presence beyond acceptable limits of an antibiotic, chloramphenicol, in the prawns.

The multibillion-peso-a-year prawn industry, which contributed substantially to the national economy, and which took decades to develop, was suddenly crippled.

Japan and Europe went on to impose strict food regulatory requirements through the years because of the growing frequency and intensity of toxins in mass-produced foods.

Today, the Philippine shrimp industry has overcome the problem, but the issue of chemical contamination of foods remains a major concern.

“One of the aims of the symposium is to stimulate awareness among the public, the food manufacturers and the government about this problem,” said Dr. Chua, who delivered the opening remarks.

Dr. Isao Saito of the Product Safety Inspection Center in Tokai, Japan, discussed the situation in his country. He said that Japan’s domestic food production supplies only 40 percent of the citizens’ needs based on calorie requirements.

Japan’s food supply is low on wheat, edible oil, animal feed, corn and beans. It imports the rest of the 60 percent from other countries such as the Philippines.

But its stringent methods of ensuring food safety have enabled the Japanese people to avoid diseases such as diabetes and cancer.

Professor Chu Tham Ngoc Son, a consultant of Eurofins Scientific, an international company providing analytical testing services in Vietnam, disclosed that mislabeling and deliberate substitution of permitted food additives with cheaper but possibly harmful alternatives for profit have been detected in Vietnamese food.

Some of these harmful stuff, he pointed out, were melamine in milk and milk products; sugar syrup in honey; roasted maize or soybean in coffee; and Tinopal, a whitening agent for detergents illegally used in rice noodles.

Dr. Chua told Inquirer Lifestyle that since food contamination continue to pose a threat to Philippine exports, “the importing countries have set standards for certain contaminants that they expect from fruits, vegetables and meat. In fruits and vegetables they look precisely for the presence of pesticides.”

Pipac—whose clients include United Laboratories (Unilab) and companies involved in fish exports—is focusing on chemical contamination and chemical methods for measuring the amount of contamination.

Dr. Chua mentioned, for instance, an organic chemical compound called 3-MCPD, a carcinogen which has been detected in some soy sauce brands.

He said that if people become are aware, “then maybe something will be done, like the government may set up stricter regulations, for example, to limit the addition of certain chemicals, the overuse of pesticides.”

He noted that there’s available information on what kind of chemicals are used to produce more food by using pesticides.

“Pesticides are good in the sense that they remove or minimize the insects that infest fruits, vegetables and meat. But the downside is there are residues left on plants and animals which people consume,” he explained.

But of all the dangers that Dr. Chua mentioned, something that hit close to home are the growth hormones that are injected to chickens—whose eggs we consume for breakfast may contain cancer-causing agents.

The good news is, there are now chickens and eggs classified as “free range”—or devoid of chemicals and other additives—sold at the supermarket.