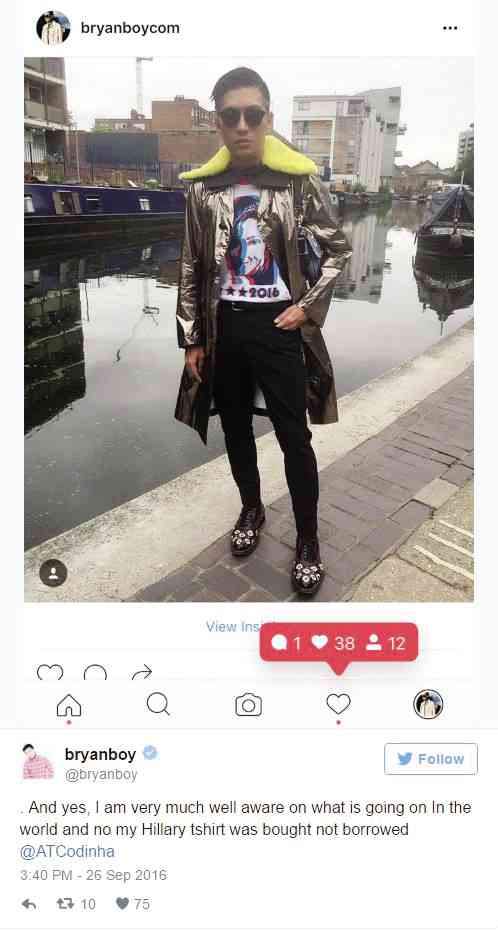 BRYANBOY on Twitter. Above and below, left: screen grabs of the online barrage on Vogue.com

It’s no secret that today’s digital age has given much access to the global fashion industry, allowing new ideas and transforming what were once industry-exclusive fashion shows into circus-like spectacles come fashion week season.

Perhaps nowhere is this change more evident than in the growing popularity of “street style” coverage, which has turned show-goers into virtual shows themselves, beamed around the world in real time to live feeds, blogs and social platforms like Twitter, Facebook, Instagram and so on.

A few days ago, Vogue’s editors—Sarah Mower, Nicole Phelps, Sally Singer and Alessandra Codinha—posted their recap of Milan Fashion Week on www.vogue.com. However, it wasn’t their commentary about the collections that caused a stir. Rather, it was their shared criticisms of fashion bloggers that set Twitter on fire.

“Note to bloggers who change head-to-toe, paid-to-wear outfits every hour: Please stop,” said Singer. “Find another business. You are heralding the death of style.” Susie Bubble and BryanBoy, two of the most popular figures in the blogosphere, reacted on Twitter, arguing that fashion magazines essentially do the same thing, creating editorials from some of their biggest advertisers, without disclosing the relationship to readers.

Such comments stirred the years-old debate that has been going on since the early days of fashion blogging. In an interview with The Cut, Bryanboy said, “It really feels like flat-out bullying! It’s 2016, not 2009, and I cannot believe we’re still having this conversation.”

Most commenters online are quick to say that such remarks hint at some possible underlying jealousy because some bloggers are being treated the same as—or even better than—editors of established publications. After all, many editors have had to work for decades before getting their big break, while in comparison, most bloggers have been writing their blogs for just a few years. In editor years, those few years would translate to a junior position in a magazine, without the perks or fame that some bloggers now enjoy.

There is no denying that some bloggers have become prominent members of the fashion industry. They are constantly featured in street style blogs and websites during fashion week, collaborate with luxury brands for  exclusive clothing collections, and have millions of loyal followers on their personal blogs and social media pages. While it is an interesting phenomenon that has changed everyone’s approach to fashion, whether it be retail, media or PR, let’s take a step back to note that magazines, their editors and prominent fashion journalists paved the way for what everyone now sees in fashion week.

With the likes of the late Bill Cunningham, these same editors and journalists helped put a focus on what people were wearing to fashion month. And to that effect, their mere mention of bloggers in their magazines and corresponding websites have added the credibility and exposure that have helped some bloggers skyrocket to fame.

Sure, such comments from editors can be a tad harsh— bloggers, after all, are the same people for whom women like Anna Wintour write and create their magazines, the same people who dream of and aspire for the kind of lifestyle shown in said magazines.

As one who has attended a number of shows pre-social media, from observation, I believe the so-called fashion circus may have gotten quite out of hand. This, coming from someone who paid for her own clothes to wear to the shows and saw no need to change several times a day because back then, our only task was to write and review the clothes on display.

If in the past we went to cover the shows, now some attend to be the show. If we were taught from day one to write objectively and to never include ourselves in what we wrote, is it so surprising that people from the old school find it self-serving and narcissistic when bloggers don’t do much but post oohs, aahs   and numerous OOTDs?

And there lies the difference —magazines tend to have a more objective, though distant point of view, while bloggers provide a different perspective. They are more accessible, in such a way that readers mainly look to how bloggers create a story with the clothes they wear, allowing readers to forge a personal connection to their style and life, whether that life is real or contrived.

I read magazines and blogs for the same reason—because they offer different perspectives. Why pit journalists against bloggers when the two are not mutually exclusive? There are journalists who blog, and there are bloggers who approach their work as journalists, doing their best to ensure that they work to earn their credibility in a digital space.

What could be infuriating Vogue’s editors is to see fashion blogs balloon overnight, virtual copycats of the ones who came before, and get showered with freebies, with no content to show for it. It demonstrates no passion or dedication to fashion, and it undermines everyone else who has been working so hard to hone his or her writing and work, genuinely showing interest in participating in an industry that has often been inaccessible to most.

Magazines and bloggers are beholden to both their readers and advertisers. How they balance the two is what makes them a better read than others—there need not be a war because what matters is what you write beyond the clothes. The thing is, everyone is entitled to an opinion, but sad to say, some opinions are more valuable than others—whatever the medium.

E-mail the author at frontrowedit @gmail.com.