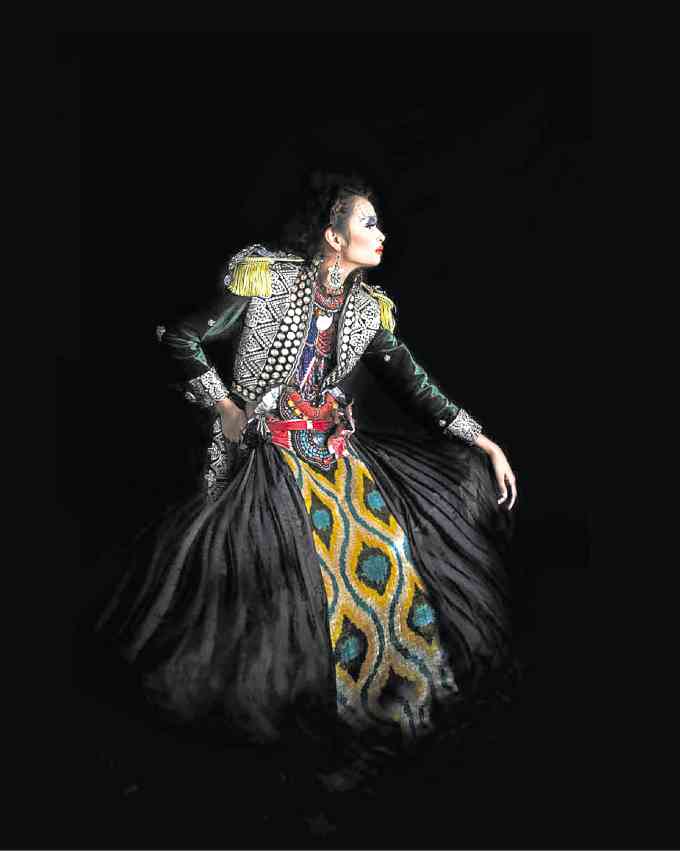 THE RED collection will be a showcase of the avowed maximalist’s penchant for rich color and ornamentation.

At the peak of his career 30 odd years ago, Chito Vijandre set his sewing tools down, and said goodbye to fashion design.

Vijandre was burned out, just “tired of it,” he says now, as he prepares to unveil his first gala fashion collection in more than three decades. He is the  featured designer of the Red Charity Gala on Oct. 8 at Shangri-La at The Fort, Taguig, which is now on its eighth consecutive year.

To millennials and Gen X’ers, Vijandre is better known as  retailer, one-half of the duo with a florid and peppy sense of style behind the chic and eclectic home décor and jewelry stores Firma and AC+632.

And rightly so, since the former fashion designer hasn’t done a show, much less a full collection, in as many years—apart from a group show in 2011 marking the 50th year of his alma mater, Slim’s Fashion and Arts School. In that show fashion audiences got a rare fleeting glimpse of what they had been missing from this gifted designer.

Vijandre belonged to the generation of designers who honed their skills and taste in luncheon fashion shows, presenting alongside the likes of Inno Sotto, Joe Salazar and Gang Gomez at the Hyatt’s La Concha, where the well-heeled set would come to see and buy the clothes. This was in the ’70s well into the early ’80s.

“When I was doing clothes, fashion was entertainment,” Vijandre says. “Of course, even up to now,” he adds with a laugh.

“But at the time, every day the Hyatt would fill up, and clients really bought and ordered clothes. Gary Flores choreographed the shows and the models memorized the steps. It was very engaging.”

After a good two decades, Vijandre switched his interests to interior design, which he found to be “more challenging, a more lasting expression of my artistry, rather than ephemeral clothes that you wore once or twice.”

With his longtime partner Ricky Toledo, Vijandre set up Firma, and continued to do interior design projects on the side.

“It came to a point I wanted to do clothes again. I missed it after 30 years,” he says, recalling the first time Tessa Valdes, co-chair of Red, presented the idea to him two years ago. Red Charity Gala benefits the Philippine National Red Cross and the Assumption High School Batch 1981 Foundation.

Valdes and Red co-chair Kaye Tiñga, for the past eight years, have been choosing featured designers in consultation with the gala’s co-presenter, Bench. Vijandre was part of an advertising team that won Bench a platinum award in the late ’80s.

“Ricky’s ad agency did the very first Bench ad, ‘Skulling,’ with Richard Gomez,” says Vijandre. “The second, ‘La Moreau,’ I did the production design and costumes. It won a platinum award. We did three commercials for Bench.”

Vijandre will present a 40-piece collection inspired by segments of Philippine history. He also mined his 2011 Slim’s collection.

“It’s Filipiniana, but it’s not,” he says with a laugh. There will be six suites of the show directed by Ariel Lozada, beginning with the “ethnic suite” inspired by the Galleon trade, for which the acquisitive designer is using his rich stash of fabrics from India, Uzbekistan, Tibet. He has brought out all the good fabrics and embellishments he has amassed through his travels with Toledo.

Vijandre mentions Gabriela Silang as the takeoff point of the “revolt suite,” but gently warns not to expect kimona silhouettes; he will be making “gladiator gowns.”

“You won’t see Filipiniana fabrics,” he says. “If Nick Joaquin writes in English, it doesn’t mean it’s not Filipino. So I figured…”

He also has segments devoted to Hollywood glam and Sampaguita Pictures, carnival queens and the flapper era, an old signature. The traditional bridal dress will have a medieval theme.

The collection will be a showcase of the avowed maximalist’s rich tapestry of color, one of his strong suits. All the accessories are handmade and customized for each look. He “borrowed” his former seamstresses from their current employers.

Toledo says Vijandre’s collection is constantly evolving; one the latter may sign off on today could easily change the next day. The designer says he enjoys embellishing gowns.

“Designers today are pretty good,” says Vijandre. “The ones from Dubai really have the craft of embellishment,” he adds, referring to Michael Cinco, Furne One, Ezra Santos and Cary Santiago, all previous featured designers of Red.

“But most (of those here) don’t, maybe because it takes so much time. They’re not as crafty as before, when there was time to do it.”

He adds, “I never followed trends. Color is one thing I’ve always been good at. What they’ll see is that the clothes are very creative, there’s history behind it.”

Vijandre has a caveat for potential clients: He won’t be making clothes other than for the Red gala.

“If they want it, they can buy as is… Maybe we’ll use the clothes for a scenario in our Christmas windows.”

The show is directed by Ariel Lozada, with styling by Noel Manapat, and hair and makeup by Henri Calayag. For inquiries, call Joel Acebedo at 0947-8125431.