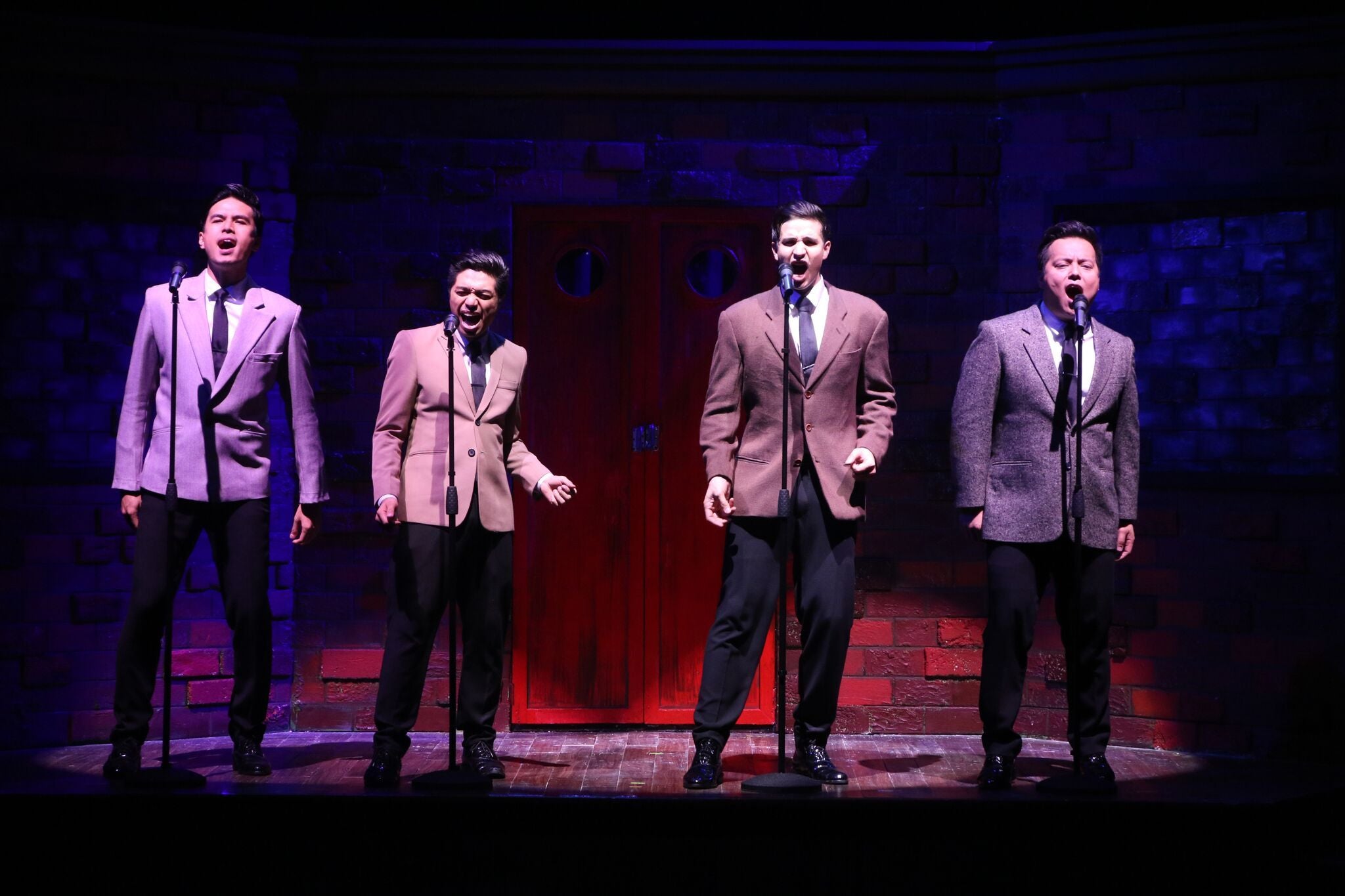 ‘Boys’ on fire, kids on a mission

Four street punks in New Jersey rise to become the musical superstars of their day. Two ordinary, darkish-looking siblings transform into superheroes to literally save the world.

Both groups overcome impossible odds, and sometimes their own dark natures, because of the strong bonds of friendship. Throw in riveting musical numbers for the first, creative mayhem in the second, tight direction and shining performances in both, and you end up with two winning theatrical productions: Atlantis Theatrical Entertainment Group’s “Jersey Boys” and Ma-yi Theater Company and Tanghalang Pilipino’s “The Wong Kids in the Secret of the Space Chupacabra Go!”

The music and the drama in “Jersey Boys” start off with a bang, and do not let go until the very end, when Franki Valli and The Four Seasons are inducted into the Rock &   Roll Hall of Fame. The nearly three-hour production running time breezily carries the audience through almost 40 years of the ups and downs of one of the precursors of the modern boy bands.

The four-man song-and-dance act, formerly known as  The Four Seasons, was formed in the 1950s and launched 24 hit records from 1962 to 1968, representing the American vanguard against the British invasion by The Beatles. Today’s audiences will recognize their hit tunes, among them “Walk Like a Man,” “Big Girls Don’t Cry” and “Sherry.”

Frankie Valli later emerged as the star soloist, following the band’s struggles with massive debt, mafia dealings, family breakups and their own internal squabbling. And by the time he sings his monster hit “Can’t Take My Eyes Off You” near the climax, both the character and the actor who plays him (Nyoy Volante) have the audience eating out of their hands.

And yet, the play’s smart strength lies in the fact that, despite Volante’s high-powered falsetto, fantastic musical range and star power, “Jersey Boys” is not a one-man show. The book by Marshall Brickman and Rick Elice always keeps the focus on the team and the story of each individual member: the earnest singer-songwriter Bob Gaudio (Christian Bautista), the feisty Nick Massi (Nino Alejandro)  and the slick, street-smart Tommy DeVito (Markki Stroem).

The narrative is a revolving door that allows each character to tell his side of the tale. Bobby Garcia’s deft direction keeps the pace snappy while maintaining a keen emotional equilibrium. Despite the rousing and thrilling concert scenes, these moments stay on their side of the fence, never overshadowing the heart of the play: the guys’ friendship, which they themselves would acknowledge in the final reunion.

Teenage siblings Bruce (Aldo Vencilao) and Violet (Blanche Buhia) would have their own break-up-and-make-up sessions in the 90-minute kiddie production “The Wong Kids in the Secret of the Space Chupacabra Go!” which closed last week after a three-weekend run at the Cultural Center of the Philippines Little Theater.

The kids get called to save the world from alien invasion, despite their nerdy looks and lame superpowers. Vencilao and Buhia are adult actors, but they did look young and ordinary enough to be instantly sympathetic to their youthful audience.

But it was their journey, and the assorted galactic creatures they encountered along the way, that mesmerized. Director Ralph Peña and playwright Lloyd Suh unveiled an unforgettable coming-of-age fantasy with unpredictable plot twists that refreshingly demolished superhero stereotypes.

In the end, the siblings’ bond would save the day. Happily, too, the lessons they learned—forgiveness, honesty, courage, authenticity—were never force-fed down the audience’s throats, but were played out instead in clever devices, like the limbo that confronted the characters with their inner demons.

“The Wong Kids” drew you in with its featherlight wit, and an artistic courage that went where few children’s theater productions ever venture. It’s a kiddie show with a rare depth.