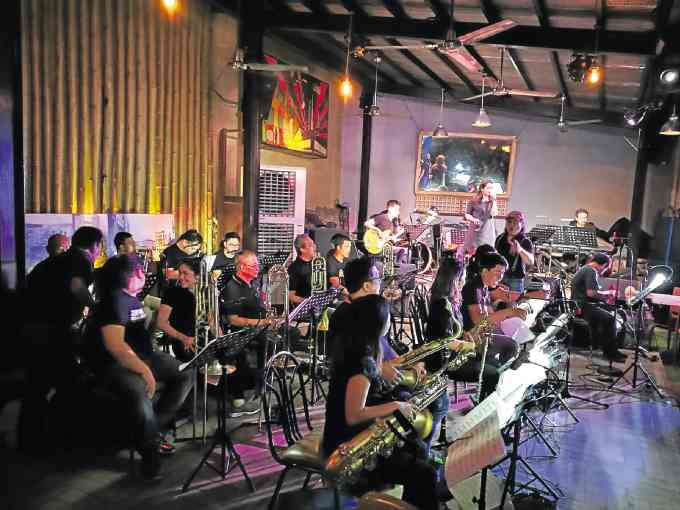 It was almost full house on a Tuesday night at Historia featuring the AMP Big Band and its current female lead singer Gail Blanco. Dubbed as a “boutique bar and restaurant,” Historia has been drawing in a good crowd with its regular schedule of top-rate live acts.

That Tuesday night, AMP bandleader Mel Villena surprised us with a repertoire that included the music of American composer Michael Giacchino, who did the soundtrack for such films as “Mission: Impossible III,” “The Incredibles,” “Star Trek,” “Ratatouille,” “Up,” “Cars 2”—you get the idea.

We couldn’t remember the titles, but the Giacchino tracks underscored the beauty of orchestral music.

Playing as an 18-piece band, AMP also rendered a condensed instrumental take on Steely Dan’s “Aja,” before going Motown—Villena and Blanco providing the vocals, with singer Lindie Ponce-Enrile joining in a few numbers.

We were tempted to get up and dance when the band proceeded with Justin Timberlake’s “Love Never Felt So Good,” but decided to remain seated while grooving and beholding Blanco’s bewitching performance that soared even further on Beyoncé’s “Love On Top.”

Somebody passed on a request for Malo’s “Suavecito” enclosed with a few thousand pesos; Villena regretted that he didn’t bring the score, but gamely obliged with a few lines, as saxophonist Michael Guevarra improvised along.

It was such a happy gig that nothing could dampen the mood, until we learned about the chilling story of another extrajudicial killing (EJK), but this time happening so close to home or the musicians’ community—the brother of AMP’s roadie murdered in cold blood while fetching water, by cops with no nameplates.

AMP’s roadie narrated that the bastards, after inspecting the victim’s body, went on to admit they got the wrong man.

Dr. Agnes Callamard, United Nations Special Rapporteur on Extrajudicial, Summary or Arbitration Executions, will have her hands full as soon as she arrives in the Philippines.

Meanwhile, not far from Historia is My Bro’s Mustache, a cozy bar that also features remarkable live acts. On a Thursday night, the joint was jumping with the classic rock and pop music of the band Electric Sala.

Composed of Mon Espia, Bobby Taylo, Wowee Posadas, Janno Queyquep and guest drummer Tony Fernando, the band likewise had surprises on its setlist—including Steely Dan’s “Rikki Don’t Lose That Number,” although one of the most engaging tunes played that night was Bruce Hornsby and the Range’s “The Way It Is,” which we’ve heard in previous gigs.