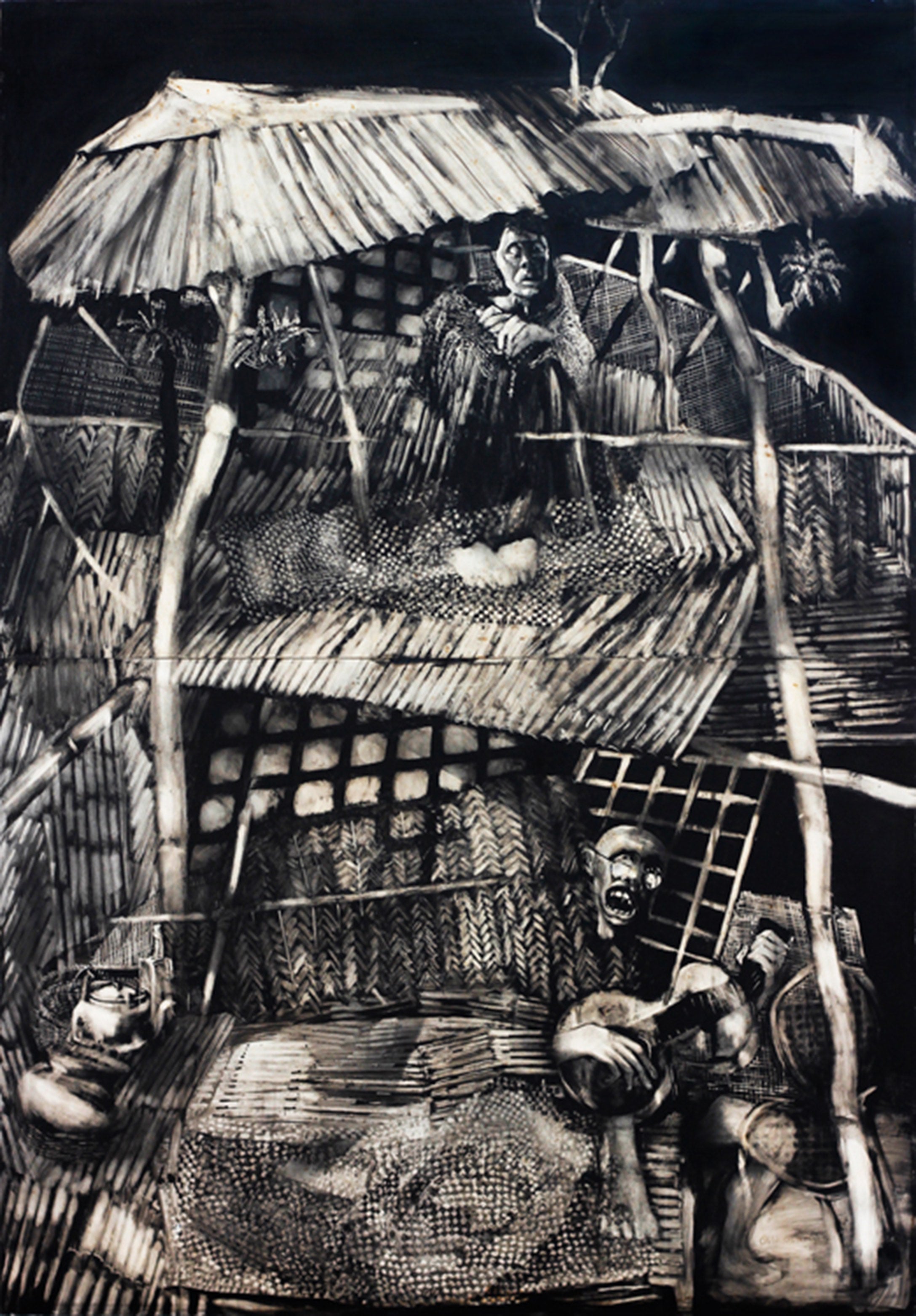 “THE APARTMENT,” by Onib Olmedo.

MANILART 2016 is the eight edition of the country’s biggest visual arts fair.

Founded in 2009 with the support of the National Commission for Culture and the Arts (NCCA) and organized annually by the National Committee on Galleries under the Subcommission on Cultural Heritage of the NCCA, ManilArt has consistently showcased the broadest mix of new and seasoned Filipino visual arts talents.

Also a winner of the Metrobank and the Philippine Art Awards, Garcia defies the conceptual trend in contemporary art.

“The anti-trend, painterly style of Garcia imparts emotional honesty to paintings that operate like entries in journals,” reads the artist’s 1335 Mabini profile.

“These bring out various intense transformative experiences and also more ordinary, blissful moments. His approach toward painting has something of a child-like sincerity to it, charged with an undercurrent of religious intensity that churns both his content and brushwork, whether for lighter or darker autobiographical periods.”

Sebastian, known for using refreshing and lush elements of nature on his canvases, is represented by “Subsistnence.”

Secret Fresh, another returning gallery, shall be presenting the exhibition, titled “Onib in 3D: An Exhibition of Paintings and Toy Sculptures,” a homage to the late expressionist great Onib Olmedo (1937-1996), one of the major Filipino artists of the 20th century.

Gallery Nine, an exhibitor since ManilArt started in 2009, shall feature “Kinetic,” the Manila-debut of Toronto-based Filipino sculptor Cris Eguaras.

Maker of wooden kinetic sculptures, Eguaras also does wood work and furniture. The mechanism of his sculptures is similar to a clock escapement where two pawls are engaging in an alternate 24 brass pegs. There is no battery or electricity required to power it, no unsightly wires to hide.

Conceptualized just for the four-day event, the “All Stars” series is inspired by Nuyda’s two-year-old half-Canadian grandson who seems to have inherited his artistic genes.

Among the international exhibitors are 1st.iKON, which shall showcase artworks by various Korean abstractionists; Embassy of Armenia, which will display works of the Asia Minor country that’s one of the original and most ancient Christian churches in the world; and Bruno Gallery of the Bruno Art Group (with offices and galleries in Singapore, Israel, Turks, Caicos Islands and the US), which will present works of Argentinian artists Adriana Naveh and Calman Shemi, Azerbaijani artist Slava Ilyayev, and Israeli artists Uri Dushy and David Gerstein.

Since October is also the National Museums and Galleries Month, a mall-wide art fest is organized and presented by ManilArt Foundation, Inc., in cooperation with SM Aura. Pocket exhibits by ManilArt exhibitors will be found around the mall.

UP Fine Arts students will have an on-the-spot painting session in the afternoon of Oct. 8.

Also as educational component of ManilArt 2016 is a showcase from Shambala Living Museum. Located in Silang, Cavite, Shambala is a museum of highland architecture and indigenous arts and crafts. It has a collection of huts from Banga-an, Kinakin, Mayoyao and artifacts like tabayag (bone lime containers), and bulol (wooden rice god figurine) from the Cordilleras.

“The idea is to bring Shambala Living Museum to the art fair so people can learn and appreciate the richness and beauty of the Filipino indigenous heritage,” said Riza Muyot, Shambala managing director.

NCCA Commissioner Fr. Harold Rentoria, OSA will give the invocation while Taguig Mayor Lani Cayetano will lead the ribbon-cutting during the by-invitation gala opening on Oct. 6. The fair will be open to the public beginning Oct. 7.