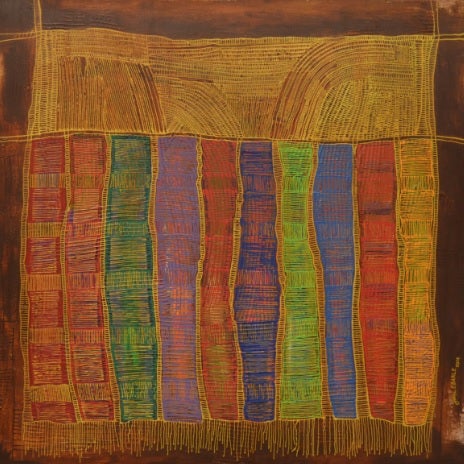 Ebarle’s first exhibition on her unique abstract rendering of traditional weaving patterns of various ethnic groups in the country was held in 2008 with her solo show “Filipino Ethnicity.”

Since then, she was able to hold a number of exhibits including in Singapore in 2010, the United States in 2013, and the National Museum thereafter.

Of the original 15 works, nine are currently displayed at the Fe Sarmiento-Panlilio room of the said museum located at the university’s cultural heritage complex.

Initially thinking of highlighting the country’s ethnicity in textile, Ebarle veered away from copying the icons and patterns due to possible political ramifications in which ethnic groups might oppose and misconstrue her work.

So she culled the traditional weaving patterns and evolved them into her abstract interpretations which are now masterpieces under her name.

Hibla museum tour features Ebarle’s past works and done in collaboration with the universities.