What you need to know about Meniere’s disease | Lifestyle.INQ ❮ ❯ 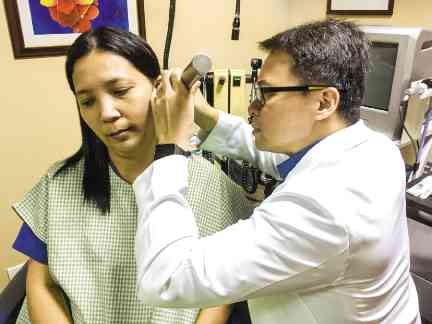 MAKATI MED has experts who can diagnose Meniere’s disease.

What you need to know about Meniere’s disease

MAYBE you’re not new to that feeling of pressure in your ears when you’re in a descending plane. Dizzy spells here and there are quite common, accompanied by a feeling of nausea.

That strong ringing sound in your ears is to be expected, especially after a live concert.

But if you experience it on a regular basis, would you think you are suffering from a disease?

Meniere’s disease, identified in 1861 by French physician Prosper Meniere, is triggered by an abnormality in the pressure of ear fluid in the inner ear, and its symptoms could just suddenly occur.

In the United States, over 45,000 are diagnosed with the condition each year. It can happen to anyone, with a small predominance among females, especially between the ages of 30-70 or even as young as 20.

“Meniere’s disease is characterized by an excess or lack of absorption of ear fluids,” explains Joseph Ray Richard R. Cedeño, MD, consultant at Makati Medical Center’s Department of Otorhinolaryngology (ENT, or ear, nose and throat). “Some symptoms that precede a Meniere’s attack would be unilateral (one ear only) hearing fluctuation, ringing in the ears (tinnitus), and a feeling of fullness or congestion in the ear.

“Some people also experience ‘drop attacks’ or extreme vertigo that causes them to lose their balance and fall, also known at Tumarkin’s otolithic crisis,” he added.

You need to have all three symptoms—hearing loss, tinnitus and vertigo—for a diagnosis of Meniere’s disease.

The labyrinth or the inner ear contains the balance organs which tell our brains about the body’s position and movement. Part of the labyrinth is the cochlea, or the hearing organ.

When fluid builds up in the inner ear, it interferes with the balance receptors and hearing signals which explains the hearing loss and vertigo.

“As of today there is really no known cure for Meniere’s disease, but it can be managed,” Dr. Cedeño points out. “There are medications to control the vertigo and we also recommend having a low-salt diet to reduce the fluid volume in the body.”

“We want people to be aware that such a condition exists and can happen to anyone. If you experience hearing or balance difficulties, don’t be afraid to consult an ENT doctor. We are here to help,” says Dr. Cedeño.