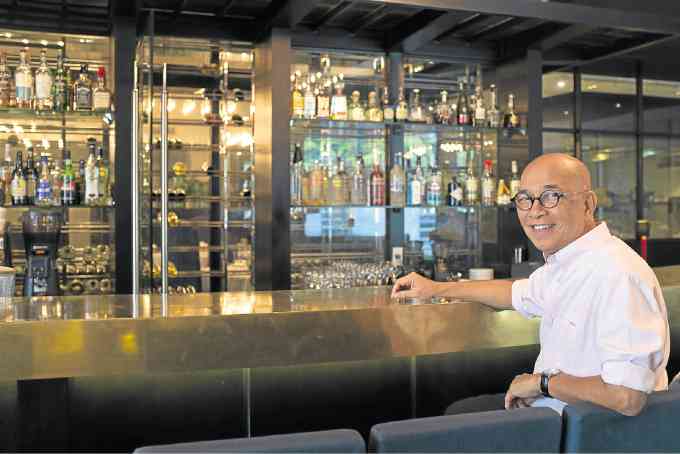 These days, don’t expect to see Cesar Gaupo taking a bow at the end of another well-received fashion show. Instead, you’re likelier to find the celebrated designer entertaining friends and guests at the French restaurant, L’Aubergine, in Bonifacio Global City.

That’s because Gaupo is wearing another creative hat, as partner and executive design director of the company that owns L’Aubergine, which he redesigned and renovated when Oeneta de Loyola Holdings Inc. acquired the 70-seat restaurant from its late Swiss chef-founder, Hansjorg Schallenberg, in 2014.

Gaupo is unabashed in his joy and delight in this new endeavor, which he considers to be “just another aspect of creativity.” He describes what he’s creating as kind of a “designer lifestyle,” and still “connected to fashion, which I’m not turning my back on.”

Gaupo is turning 70 next year, but he remains gung ho in undertaking new projects. Twice a week, he still entertains fashion clients at his Bel-Air workshop. But Sunday to Tuesdays are usually spent in the quiet stillness of his weekend home in Majayjay, Laguna.

In the last few years, he’s been trying home accessories design, so doing the interiors of a “rundown” restaurant would be up on the same artistic alley.

Gaupo had modern chinoiserie in mind as theme for the diner’s new look, to distinguish itself from other French restaurants. He did away with the rather literal aubergine color theme of the original décor, and instead had the new chairs in the main dining area upholstered in a cool cerulean hue.

Right past the foyer, he created a lounge area with cushy settees in shades of cream and black, where guests can sip cocktails and nibble on hors d’oeuvres before their meal. On the wall are oversize prints of Chinese vases on a bright yellow background.

Gaupo, however, kept the clustered inverted pendant lights in the dining area, their warm lighting reflected on the mirrored ceiling panels from which they hang. He also retained the original floor-to-ceiling chrome wine displays behind the bar, which separates the latter from the dining hall.

“We don’t want to shock L’Aubergine’s loyal patrons with too many changes,” says Gaupo. “It’s just the ambience that has changed. It’s still the same well-loved classical French cooking, in a casual elegant setting.”

Gaupo’s friends, like SM’s Tessie Coson and her family, have given his efforts a thumbs-up, he says. The Cayetanos of Taguig, and even a former president, are some of L’Aubergine’s high-profile clients.

Oeneta is behind the Sandbar beach clubs of Cabugao, Ilocos Sur, and Boracay, which attracts high-end holidaymakers from overseas.

L’Aubergine is Oeneta’s flagship brand and the anchor of its beach clubs.