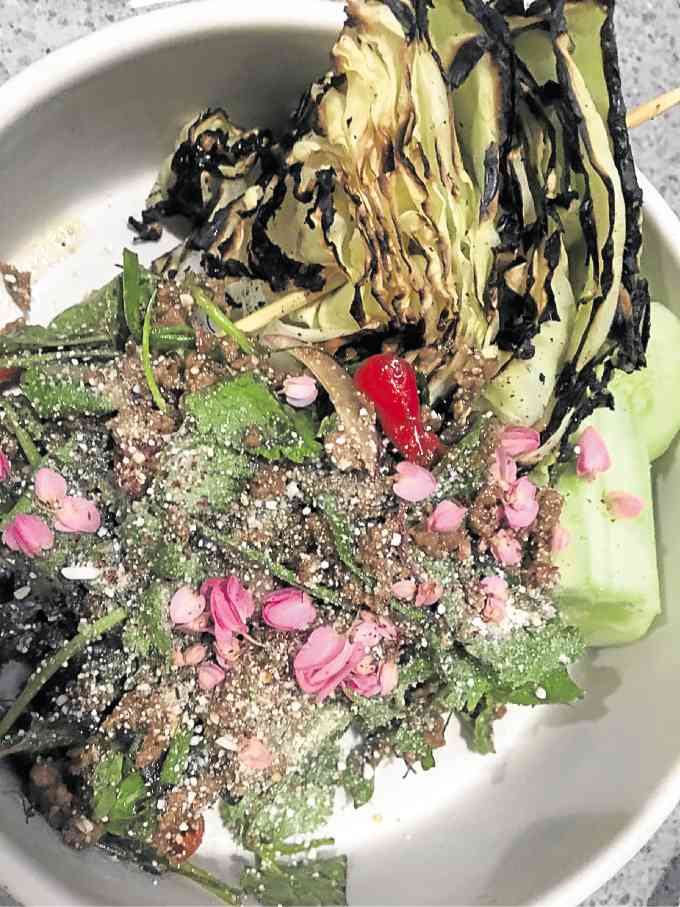 There’s been quite an interest in Singaporean food lately. My friend JJ Yulo has tipped his hat to the food blogging scene and hopped to the other side of the fence to open Makansutra—a restaurant set up to recreate the atmosphere of a hawker’s center in Singapore.

The day I was supposed to try it was the same day that I was attacked by an evil porkchop; I was down with food poisoning for a week, so that review will have to wait.

But I mention it not just because JJ is a friend but also since the place looks genuinely promising, and could make the 40 minutes spent finding a parking space in Megamall worth the trouble.

The other Singapore-themed opening in Manila of late is the cheekily-named restaurant Hey Handsome, which put me off for a bit because I figured I wasn’t among its target demographic. (Although my self-esteem is generally healthy, a food cart calling itself Hoy Panget would probably be more likely to get my attention).

And then also because it’s a Nicco Santos restaurant. I apologize to the food scene in general and to Mr. Santos in particular, but I’m probably the only person in the world who didn’t like Your Local.

Condé Nast Traveler has named Your Local one of the top 50 restaurants in the world, and the only representative from the Philippines—it’s up there with L’Ambroisie and Per Se.

The Condé Nast imprimatur came at just the right time to push business for Santos’ new venture, this time at the Net Park building.

Hey Handsome’s space is a high-ceilinged, glass-fronted box full of hard surfaces that make the noise level, even on a weekday night, a problem.

This is because it’s not an impersonal sort of restaurant, where there’s an awkward barrier between the staff and the customers, which is not to be breached. The staff at Hey Handsome are friendly, loquacious, and familiar, though not in an offensive way—not the faux chumminess of an American chain restaurant, or the flirtatious groping of a waitress trying to get a better tip.

Because the menu is different from what people know, management put it on center-stage, and it arrives written up on a chalkboard.

You are guided through it, the staff patiently explaining every course, answering questions and making recommendations. They give hints like “this is our best seller” or “this is what I personally like” which helps cut through the daunting unfamiliarity—less impersonal than putting a heart logo on a menu.

The food is supposed to be modern Singaporean, or Singaporean with a Filipino twist, or even Peranakan, according to several write-ups. But I think the marketing people just decided to ride the crest of pro-Singaporean sentiment in Filipino food (and Philippine politics).

Hey Handsome is that rare restaurant, one that isn’t based on a concept so much as a chef cooking what he likes around a particular theme; in this case, Southeast Asian flavors—though there are (inevitably) some Chinese and Japanese influences as well.

The two best starters were the tofu with a brown gloop over it, and what looked like bonito shavings on top, and a charred cabbage into which you wrapped a spicy Thai-style salad.

Like the best of Thai dishes, the flavors all came together coherently without losing its sense of complexity, like a symphony in full swing; and, like the best of Thai or Vietnamese dishes, you stop trying to deconstruct what’s going on and just enjoy it.

The flavors were no less bold and brash with the mains. A particular standout was a slow-cooked brisket with lots of gelatinous wobbly bits, served with rice and garnishes.

We also had the duck leg confit and another braised dish. Perhaps the only complaint that can be leveled at the mains is that they all follow the same formula of having a strongly-flavored braised protein with some chutneys and relishes on the side, beside a generous amount of rice.

At a certain point it’s easy to lose track of what you’re eating, unlike the appetizers which were much more varied in taste and texture.

But then we tried only three out of the five possible mains, and didn’t get to sample the beetroot paneer, which one of my friends has been raving about.

We had a return to good form with the desserts; again, we got three desserts to share among four people, which is what you’ll want to do in general. The servings are generous, and the exultant flavors trick your mind into thinking you’re more full than you actually are.

The “best seller” among the desserts is a yogurt mousse of sorts, but we were particularly pleased with a confection garnished with fuschia flower petals and wood sorrel.

The sous chef, who came around, would have been happy to explain it to us but it seemed derogatory to the food to attempt to deconstruct it into its elements. Like everything else we had, it was coherent, whole and honest.

People have been urging me to give Your Local a second chance, which I’ll get around to.

Meanwhile I can happily recommend Hey Handsome—with the quibble that while marketing it as a Singaporean, or, as described on its website, an Asian fusion restaurant, can help newcomers get a handle on the complexities of what the chef is trying to do. But this label runs the risk of fencing in Mr. Santos. And from what I’ve seen, his is one talent that should go unfettered and uncircumscribed.