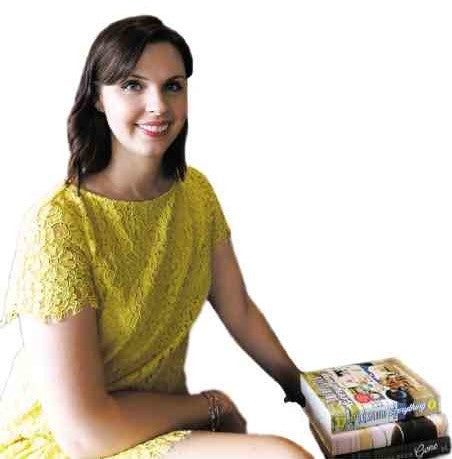 Matson in Manila—PHOTOS BY TATIN YANG

Why author Morgan Matson will never write about murder

Author Morgan Matson’s friend calls her a “method” writer. Her first book, “Amy and Roger’s Epic Detour,” was based on a road trip she had actually taken with her mom when she went off to college. When she decided to write a book, she took the road trip again, going so far as to rent the same model SUV she used in the story.

Her “method” way of writing doesn’t stop there. “For my second book, which takes place in a small town in the mountains of Pennsylvania—that’s where I grew up spending all my summers—I thought I remembered all of it, but nope, so I rented a place for two weeks in the same place where we had our summer house. My mother’s never understood it, she’s like, ‘Can’t you just research it, do you have to go to these places?’” recalls Morgan with a laugh.

“Does that mean you won’t be writing about murder anytime soon?” we ask.

“Probably not. My friends will worry,” she says.

The young adult fiction author was recently in Manila to meet fans at book signing events sponsored by National Book Store. Morgan is someone you will love off the bat. Her books are the type that whisk you off your seat and put you right smack in the middle of the story.

For those looking for an escapist read, we recommend Morgan’s first novel, “Amy and Roger’s Epic Detour,” in which two characters fall in love while on a cross-country road trip across the United States. If you’re adventurous enough, you can actually do the road trip yourself, as some of Morgan’s fans have.

She explains: “Because I’ve done this road trip three times, it was a love letter to America, like the little places I’ve been. I’ve read some road trip books where I don’t think writers actually did them; I feel like you just need the little specifics, the little towns.”

The book also serves as a mini guide to fastfood joints in different states (make sure you’re eating something while reading).

“They’re all real places. The crumbly burger place is famous; I have family in Kansas, so now my uncle goes there and he goes, ‘My niece wrote a book and mentioned you,’ so now he gets free burgers.”

“Amy and Roger’s Epic Detour” was originally just a part of four stories that had no specific narrative, until Morgan’s school adviser told her to focus on the road trip story as one novel.

The adviser was right, and set Morgan on a path that would make her a best-selling author with four books under her belt. Of course, when your adviser happens to be David Levithan, you follow what he says like it’s gospel truth.

“He’s so brilliant and he’s so kind, we became friends,” says Morgan. “And he was so right about that book, he was the one who was like, ‘This can just be about this girl and this guy and this road trip…”

If you’ve read “Amy and Roger,” and are as obsessed with it as we are, you’ll be happy (and crushed) to know that Lucien almost had his own book. But Morgan’s former editor nixed the idea.

“After ‘Amy and Roger,’ that was the book I proposed doing,” she recalls. “A new girl character who would end up moving to Lucien’s town and he would be a love interest. But they didn’t want me to do it. I feel now that his moment has passed.”

She’s currently finishing her new novel, slated to come out in May 2017.