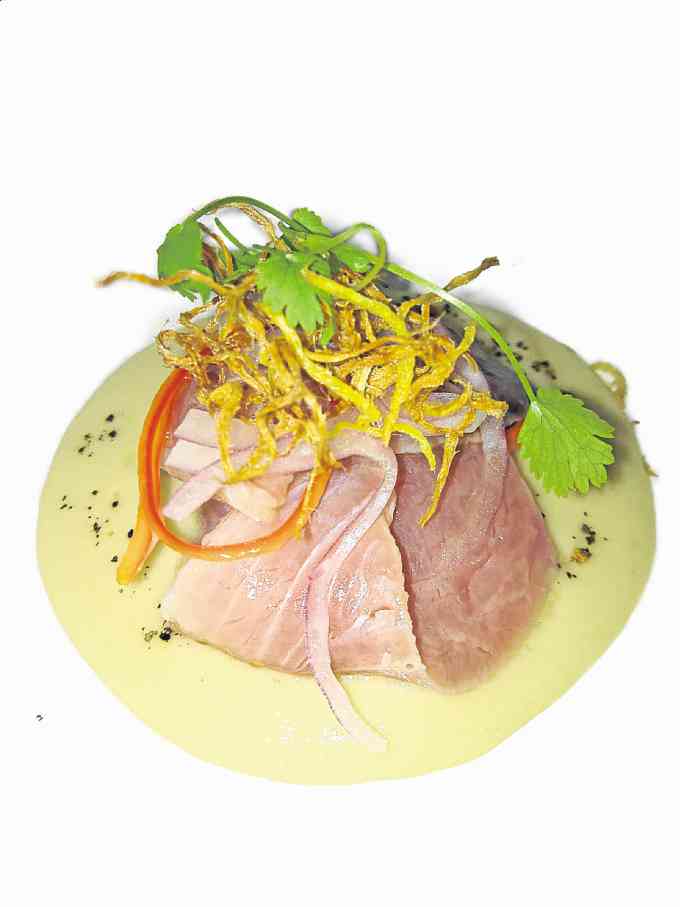 Gourmands in the city have only today, Oct. 8, to sample the dishes by visiting Singaporean chef Han Li Guang. He will prepare a tasting dinner of Neo-Singaporean dishes at Makati Diamond Residences (MDR).

“I ate at his restaurant on several occasions and, each time, I was amazed at what he prepared,” MDR president and general manager Cecille Ang said at the dinner last Wednesday, the first of Han’s two-night engagement.

Ang pointed out that she didn’t have a hard time convincing Han to come to the Philippines. In fact, he’s here for a week and will train the MDR kitchen staff on Sunday on modern ways of food presentation.

We got to taste some of his dishes, as well as one he made exclusively for the dinner with roast suckling pig, umami rice, a runny yolk and crisp nori.

When we told him we liked the pairing of flavors and textures (crisp lechon skin, runny egg and flavorful rice), he said he might consider serving it at Labyrinth.

Chef Han’s tasting menu started with a TWG Tea-infused cocktail and bite-sized snacks. This was followed by his version of ceviche made with trevally and scallops, a delicious mackerel dish with XO soup foam, and soft-shell crab paired with chili ice cream and translucent seaweed.

The chef obviously likes to “play” with his food, which has delighted diners and critics alike.

“At Labyrinth, we alter the textures, presentation and refinement of dishes while preserving the authenticity of flavors and the heritage behind traditional sauce-making,” he said in a statement.

Since the time he opened Labyrinth, Han has received the award for Best New Restaurant from Wine & Dine Magazine in 2014, and been credited with the G Restaurant Award by The Peak Singapore’s Gourmet & Travel Magazine in 2015 and 2016.